The Florida Senate Reapportionment Committee staff today will release to the public the first draft maps for congressional and legislative districts. That means a first chance to see the direction lawmakers may take in defining the boundaries governing the 2022 midterms, not to mention the next decade of Florida politics.

Ahead of that, Senate President Wilton Simpson issued a joint statement with Senate President-Designate Kathleen Passidomo and Democratic Leader Lauren Book, a sort of bipartisan clarion call to keep calm and put personal politics aside. 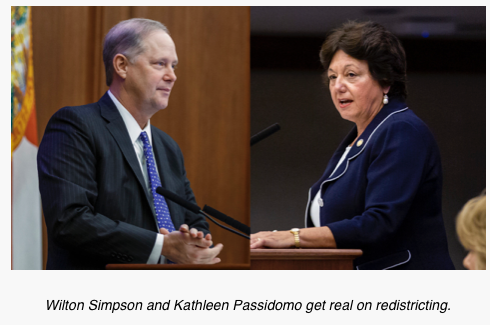 “As Senators, we are frequently presented with situations where we must set aside our personal views and make decisions in keeping with the oath we each took to defend the constitution and laws of this state,” the memo reads.

“Nowhere is this responsibility more challenging than in redistricting, given that some of us may ultimately decide to vote for a map knowing the realities of that map are such that we will never be reelected. Some of us may choose to defer seeking reelection. Still others may decide to run against a current colleague who we know and respect.”

Indeed, the Senate map could well determine whether Book or Passidomo presides over the Senate next November. Passidomo is in line to succeed Simpson in the big office, but only if Republicans win a majority of seats, all 40 of which go up next year once new lines are signed into law.

Expect a host of watchdog groups to feast on the cartography once it reaches the public. The Fair Districts Coalition already has offered failing grades to Florida lawmakers on the transparency of the process thus far. That assessment spurred Sen. Ray Rodrigues, chair of the Senate Reapportionment Committee, to dismiss the feedback as input from a “Democrat-funded partisan entity.”

“It is no surprise they are unhappy with the process we have designed to guard against partisan influence,” he said. Notably, he made those comments after attending a fundraiser for Senate Republicans in Naples.

For its part, leadership from that group said the seriousness of lawmakers to remain politically neutral will face its first great test today. The maps drafted within the Legislature hold the answer to just how fair a process led by politicians with great stakes in the outcome can be.