According to a report by Janelle Cammenga for the Tax Foundation the average level of state and local revenue coming from sales tax is 23.3 percent.  But Florida comes in at 38.3 percent ranking the state as 6th highest in the nation.  Leading the nation are Louisiana (42.3 percent), Nevada (41.3 percent), Tennessee (40.7 percent), Arizona (40.5 percent) and South Dakota (39.3 percent).  Four states have no sales tax:  Delaware, Montana, New Hampshire and Oregon.  Alaska allows local jurisdictions to impose sales tax, but has no statewide sales tax.

Florida relies heavily on sales tax in the absence of a state income tax.  The same is true for Nevada and Tennessee.  According to Cammenga, “Consumption taxes (like sales taxes) are more economically neutral than taxes on capital and income because they target only current consumption. Income taxes fall on both present and future consumption, thus partially acting as a tax on investment by capturing savings.  Consumption taxes are generally more stable than income taxes in economic downturns as well. Although there was an initial drop in consumption during the coronavirus crisis, sales tax revenues have bounced back as many stores have reopened, and as people have moved much of their shopping online.” 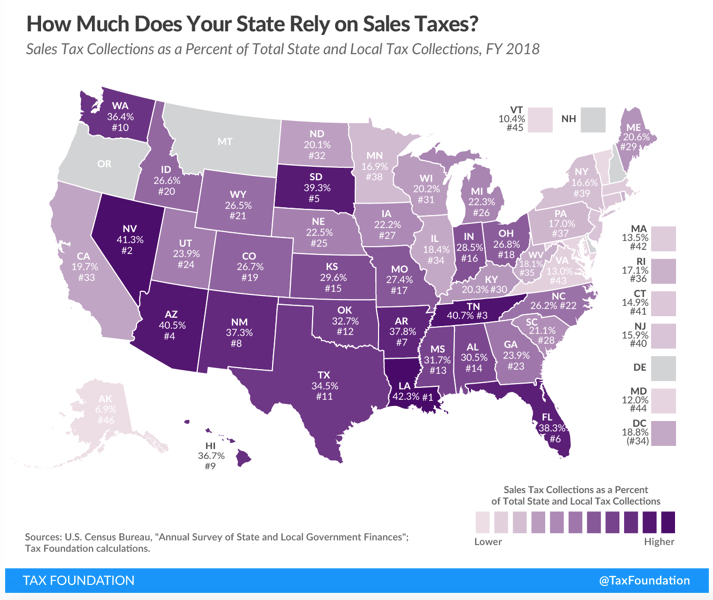 In other recent Tax Foundation studies of states, Florida ranked fourth for overall structure of its tax system, coming in at first for individual income taxes, sixth for corporate taxes, and 13th in the property tax category.

Sales taxes are regressive, in that they hurt poorer people more than rich people (e.g., the tax on a gallon of milk is a higher percentage of income for a poor person than for a rich person). Not having an income tax benefits rich people enormously, as income taxes are usually structured more progressively. Where there are income taxes, they allow many more deductions and loopholes that benefit only wealthy people and are so loosely enforced that hundreds of billions of dollars go uncollected every year (see today’s article in the New York Times on an easy solution to collect tax on unreported business income – taxes that are owed but we are being cheated out of).

Mark Tomes makes a good textbook point, but one that may not be as applicable in Florida. Milk, bread and most other grocery foods are not sales taxable in Florida. Nor are most medicines/medical devices/treatments and bottled water. Cars and televisions are taxable as are most restaurant meals (both fast food and high end) as well as most prepared foods. While “regressive” is a very good word, “encouraging” could also work. A sales tax encourages poor people to buy generally less expensive and healthier whole, unprocessed foods and to spend less of their income on expensive consumer goods and less healthy (and often more expensive) processed and prepared foods.