The title of this article may sound a bit ominous, but as part of a training exercise to provide support for the  increased air traffic at the Fernandina Beach Municipal Airport during the 24th Annual Concours d’Elegance, members of the 2-111th Aviation Operations Battalion from Camp Blanding Joint Training Center were on hand to lend their assistance in Air Traffic Control. The airport typically fills-up with a wide variety of airplanes from small single-engine aircraft all the way up to the largest business-class and private jets.

The unit, made-up of Florida Army National Guard Soldiers,  operates from an ultra-modern Mobile Tower System (MOTS) vehicle that can deploy rapidly to any place they’re needed. Totally self-contained and self-supporting, the soldiers set up communications antennas and mobile generators to assist control operators at the airport.

Chris Whelan, who served as a Navy Aerographer’s Mate, met with the three soldiers assigned to the Mobile Tower System and was  impressed with their professionalism and dedication to the mission at hand. Chris is grateful to Airport Operations Manager, Bobby Kozakoff for arranging the meeting with the dedicated soldiers. 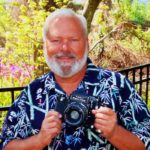 Editor’s Note: Chris Whelan joined the United States Navy straight out of college in 1975 and served for 22 years as a Navy Aerographer’s Mate – the Navy’s meteorologists and oceanographers. Chris earned the American Meteorological Society (AMS) Broadcast Seal of Approval in 1994 and was an on-air meteorologist for the local television station WTLV starting in 1986 until he retired in 2004. Chris came to our island in 1991 and spends his time photographing the sights of our wonderful island, collecting and restoring vintage cameras, and being involved with local environmental issues, and enjoying his family. We thank Chris for his contributions to the Fernandina Observer.</em