With at least seven school boards defying Gov. Ron DeSantis and the Florida Board of Education (BOE) by adopting mandatory mask mandates, Leon County Circuit Judge John Cooper Monday heard opening testimony in a three-day trial that will determine who gets to make COVID- 19 rules in Florida schools – parents or district officials. 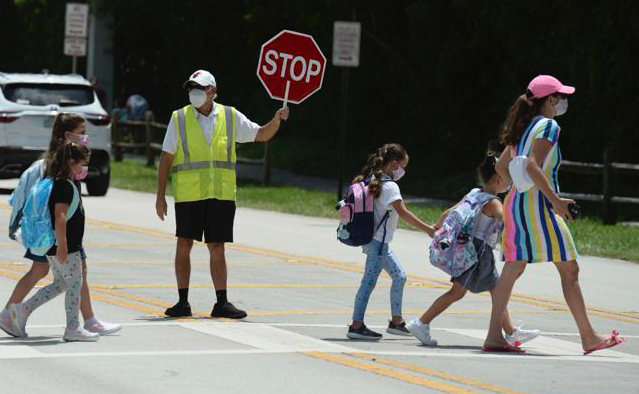 The state contends DeSantis’ June 30 executive order allows parents to ignore mask mandates issued by school officials and that recently-adopted House Bill 1059, the Parents Bill of Rights Act, requires districts and agencies cede to parents in decisions regarding their children.

On Aug. 17, the BOE agreed two boards – Alachua and Broward – violated the executive order and HB 1059 by imposing mask mandates and should be docked state funding the equivalent of school board/administrator salaries. In addition, some officials could be removed from posts.

In recent days, emboldened by pledges of financial/legal support from President Joe Biden’s administration, school boards for Miami-Dade County, the nation’s fourth-largest district, and Hillsborough and Palm Beach counties, have approved mask mandates for all students, faculty and staff regardless of vaccination status.

Leon and Sarasota school boards issued similar orders over the weekend, adding to the list of noncompliant boards essentially betting on the case before Cooper, hoping he upholds the challenge filed by parents of children from seven school districts.

Cooper last week dismissed the state’s petition to toss the suit and opened Monday’s hearing by acknowledging the time for issuing a ruling is tight. “I want everyone to have enough time,” he said, “but I think we need to move as quickly as we can.”

In a 35-page complaint filed Aug. 6, the parents maintain DeSantis’ executive order violates districts’ authority under the state constitution, denies due process and is “arbitrary and capricious.”

The suit cites guidance from the U.S. Centers for Disease Control & Prevention (CDC) and urging from the 67,000-member American Academy of Pediatrics that schools should require masks be worn by all indoors.

“Because of the delta variant, our schools are not safe and secure unless everyone wears a mask,” Dodson said. “It is certainly an emergency.”

State attorney Michael Abel argued the governor’s order complies with the state constitution, as does HB 1059, which states only parents and legal guardians can “direct the upbringing, education, health care and mental health.”

Abel said state experts will testify that forcing students to wear masks indoors causes many certifiable harms while their effectiveness in tamping down spread among children is not certifiable.

Citing 2020 state statistics that preceded the delta variant’s July explosion across the state, Abel said 40 of Florida’s 67 school districts mandated masks but still had positive virus tests rates of 48 of every 1,000 students – just as high if not higher than districts without such policies.

“Mask mandates are unnecessary,” Abel said. “We will show that all of the state’s actions were consistent with the Florida Constitution and state statute.”

Parents exercise their rights to engage in educational decisions by voting for school board members, speaking at school board meetings and to school officials, and by choosing to stay in public schools or not. There is no parent right to unilaterally alter school policy, especially when such alteration threatens the health of all other children. By the way, there is an excellent article in a NY Times edition from last week about the pros and cons of children wearing masks at school; it is nowhere near as bad as some would like to purport (as my own experience as an educator for 32 years bears out). What is not helpful is for parents to set their kids up for their own political agendas and then their kids bring that to school.