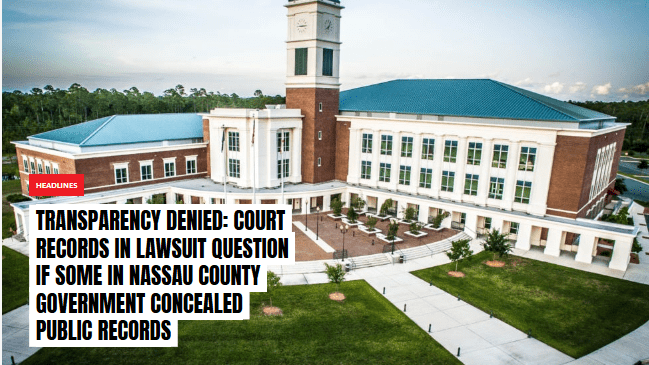 “I didn’t want it to get into the wrong hands.”

In November 2018, Raydient Places + Properties (Raydient) and Rayonier initiated litigation against Nassau County. The lawsuit was in response to the dispute that unfolded in the spring and summer of 2017 and culminated in a formal written demand from Nassau County Attorney Mike Mullin on behalf of Nassau County that falsely claimed Raydient had agreed to fund construction and maintenance for all civil facilities at the penalty of losing further development rights within the East Nassau Community Planning Area (ENCPA).

The lawsuit filed by Raydient in the 4th Judicial Circuit Court asked the court to weigh in on who, in fact, is responsible for the construction and maintenance of parks and recreation facilities within the ENCPA.

Then, almost four months after Raydient made its public records request to the county, news broke that then-County Office of Management and Budget Director Justin Stankiewicz had been fired from his position with the county and that he had filed grievance papers with Mullin in January 2019, “contesting his termination from the county without cause.”

Stankiewicz claimed, in his grievance papers, that “the county had terminated him in retaliation for his refusal to obey Mullin’s direction on Nov. 6, 2018, to delete text messages that were responsive to Raydient’s public records request.”

Stankiewicz wrote to Mullin: “You directed me to delete these messages, which is a direct violation of Chapter 119, Florida Statutes. Furthermore, you stated that you have already deleted your text messages which, in addition to a violation of law, is a violation of Section 2.01, Code of Conduct of the Employee Policy and Procedures Manual. After understanding the magnitude and unethical conduct of what you were directing, Susan Gilbert asked to excuse herself from the meeting stating that she ‘did not want to be part of this meeting.’”

Early discovery efforts and depositions in Raydient’s case echoed the same information contained within Stankiewicz’s grievance — that hundreds of text messages responsive to Raydient’s public records request existed but were never produced by the county, which seemingly tried to conceal and destroy them.

Stankiewicz’s deposition shows that he immediately complained to co-workers and family members about Mullin directing him to delete text messages. This was also confirmed by several other witnesses, including Gilbert, Mullin’s administrative assistant, who was present at the beginning of the meeting between Stankiewicz and Mullin.

In Gilbert’s deposition, she testified that she excused herself from the meeting when she became “frustrated,” because she “felt all messages needed to be turned over.” She further testified that she “did not feel that was the path that was being taken by anyone” and detailed that Mullin has a setting on his iPhone so that any text messages he sends or receives are deleted within 30 days.

Two days after Stankiewicz’s meeting with Mullin on Nov. 8, 2018, the county produced documents responsive to Raydient’s public records request. However, text messages were not included in the documents produced.

In its complaint, Raydient included “text messages that had been made available through recent media reports regarding Stankiewicz’s employee grievance.”

In fact, these text messages produced by the county on Feb. 7 “were the exact same documents already attached to Plaintiff’s Complaint a day earlier, and were simply a copy of the same documents Stankiewicz filed with the County as part of his grievance.”

At the end of his term in November 2018, Commissioner Kelley testified that anything related to county business, including documents that were Raydient-related, were shredded in his office, because “I didn’t want it to get into the wrong hands,” such as the news media.

While the final decision in this matter is left to the court, it seems that proof is mounting against the county, as the exhibits and amendments in Raydient’s complaint are littered with example upon example of how the county appears to have evaded and concealed public records.