Only Commissioner Tim Poynter and Mayor John Miller voted against three items on the August 16, 2016 Regular Meeting agenda of the Fernandina Beach City Commission (FBCC) dealing with a proposed voluntary annexation of 7.91 acres of land located at 3017 and 3021 Amelia Road into the city. The applicant—Aspire at Amelia II, LLC—requested annexation to gain access to the city’s water and sewer system. They also requested assignment of Medium Density Residential (MDR) land use and RLM (Residential Low-Medium) zoning designation. The property is contiguous to the municipal limits on the city’s southern and western borders. The applicant intends to build a single family home subdivision. 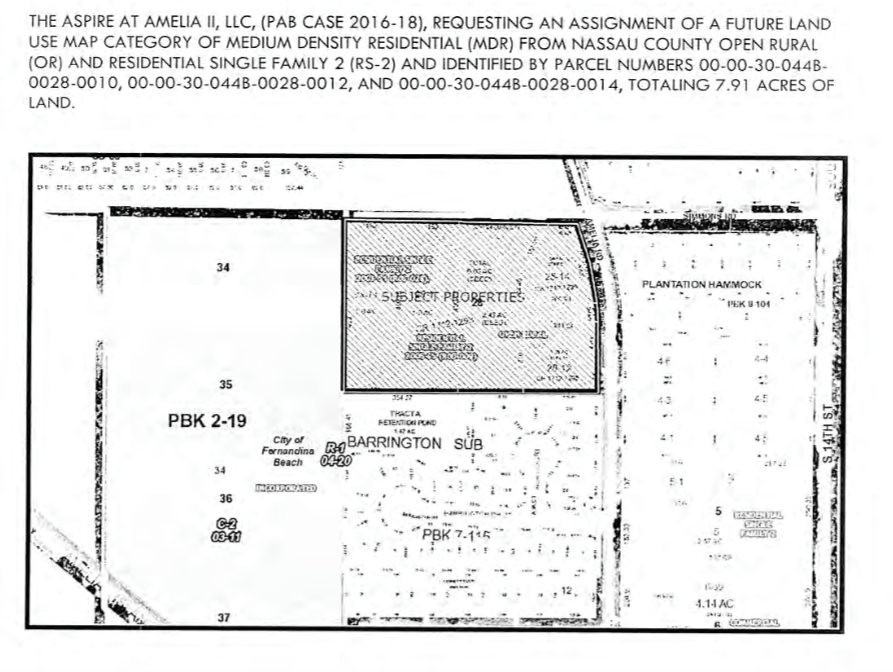 The Planning Advisory Board (PAB) and city staff have recommended approval of the proposed actions. Only one person spoke against the proposed action(s). Mary Libbey explained that initial plans for the property indicated that it would be a senior living center, and that neighboring residents were “kind of okay with that.” Subsequently she said that the project has changed into a single family subdivision. She expressed her fears and those of other neighbors that increasing the proposed density from RLM to MDR would adversely impact wildlife and ecology of the area. She said that she hoped that commissioners would not ignore the will of the people and encourage increased density to the detriment of a barrier island forest. Many people in the audience raised hands in support of her position.

Commissioner Tim Poynter asked city staff for clarification. Senior Planner Kelly Gibson that the property, currently located in the county, could be developed in the county. But annexation would be required to enable the property to hook into city water and sewer. The property is currently split zoned with lower densities assigned to it than it would have in the city.

There was no commission discussion. When the vote was called, both Poynter and Mayor John Miller voted no, but the item carried with three positive votes.

When contacted after the meeting for comment, Poynter expressed surprise that there had not been more concern expressed by those who had opposed the development of the property located at 14th and Lime Streets, since the unplatted property proposed for annexation appeared to be exactly the type of property the development opponents had been intent on protecting. Poynter appeared to support annexation of property for a senior living center, but not necessarily for creation of another housing subdivision.