During the upcoming November elections, Fernandina Beach voters will once again get to decide whether they want their city commissioners’ terms extended to four years from the current limit of 3 years set by City Charter.  This time the proposed implementation of the change would not “grandfather” current commissioners into the longer term, but would require each commissioner to seek election to the new, 4-year term.  And the change would not happen overnight.  The implementation schedule, presented and adopted as Option B, would require two more odd-year elections before all group seats could be converted to four-year terms.  The resulting schedule of elections would mean that in 2018, Groups 4 and 5 would run for four-year terms; Groups 2 and 3 would convert to four-year terms in 2020.  Group 1, the seat currently held by Johnny Miller would be the first to convert to 4 years in the 2016 election.  Starting in 2018, all elections would be held in even-numbered years, paralleling those of the Nassau County Commission and the Nassau County School Board.  Eliminating the odd-year elections would save the city on the order of $15,000 per election.

During their August 25, 2014 Special meeting, the Fernandina Beach City Commission passed on second and final reading Ordinance 2014-28, which places the binding referendum extending terms on the November ballot.  Commissioner Johnny Miller was absent from the meeting, but all other commissioners supported the action, after discussing some other options and considering public input.

Commissioners were presented with two options for rolling out the four-year terms, based upon discussions at the August 19 City Commission meeting.  Option A would have resulted in four commission seats up for election in one year in addition to an election for a one-year term extension for Groups 2 and 3 in 2017.  Option B ensured that there would be two election cycles with either 3 or 2 seats up for election every two years, with terms for all but Group 1 remaining as 3-year terms until 2018 and 2020.  Commissioner Charlie Corbett moved approval of the Option B amendment.

Vice Mayor Sarah Pelican seconded Corbett’s motion for discussion, but asked why the commission was not considering all options, including two others put forward at the August 19 commission meeting.  City Manager Joe Gerrity reminded commissioners that they had had several days to raise questions or suggest amendments to the options presented, but no one had done so.  He expressed his support for Option B, adding, “I don’t feel comfortable with anything else.” Pelican said that she wanted to consider “Option 2” from the August 19 meeting as well.

Local Attorney Valerie Faltemier, filling in for absent City Attorney Tammi Bach, called for a brief recess so that she could check with Bach on the legality of considering an option that had not been presented as part of the meeting agenda.  She returned to advise the commissioners that they had the authority to consider other options during their discussion.  She quoted Bach as saying, “You can change whatever you want, but you need to articulate it clearly.”

Pelican preferred the Option 2 from the August 19 meeting because it eliminated odd-year elections to reach the goal of full implementation of 4-year terms with the 2018 election, and it saved the cost of one election.  It appeared that Commissioner Pat Gass also favored this option.

However, during public input concerns surfaced with that option.  Roy G. Smith, Jr., 2014 candidate for the Group 2 seat currently held by Charlie Corbett, objected to Option 2, saying that it would change the terms for current seats up for election in 2014 (Groups 2 and 3) from three years to two years.  He said that based upon city-advertised election notices, he had made a decision to run for an office advertised as having a three-year term.  He suggested that to cut back the term to two years after advertising it otherwise would be a violation of election laws.  He said that he would take legal action to protest such a change.  Both Corbett and Pelican said that it would affect them, too, because they would have their second terms cut short, but that they would not object.  Smith reiterated that he would challenge the change for the current election cycle.  Corbett asked Smith “just for the record” if he would object to extending terms to four years.  Smith said he would not.

Local citizen Andy Curtin also rose to speak, expressing his opinion that while he appreciated the commission’s desire to eliminate the cost of an interim election, he felt that Option B was a better option.  “The only downside,” he said, “is the extra election.”

Commissioners unanimously approved Option B and the amended ordinance calling for the Charter change to four-year commission terms.  This was the second and final reading of Ordinance 2014-28.

Should the voters pass the referendum, with term changes that were also recommended by the city’s Charter Review Committee in 2007, there would be no impact on sitting commissioners who were elected to serve 3-year terms.  The successful candidates for the Groups 2 and 3 seats up for election this November would still serve a 3-year term.  Candidates for Group 2 election include incumbent Charlie Corbett, former commissioner Tim Poynter and political newcomer Roy G. Smith, Jr.  Candidates for Group 3 election include political newcomer Robin Lentz and incumbent Vice Mayor Sarah Pelican.  Should Corbett and Pelican win the November 2014 election, they would not be eligible to run for the 2017 election because of term limits.  Should any of the challengers win the 2014 election, they would be eligible to run for re-election to another 3-year term in 2017.  Those two seats would not convert to 4-year terms until the 2020 election.

In 2015, Groups 4 and 5 seats would also be up for election for 3-year terms.  Mayor Ed Boner and Commissioner Pat Gass currently hold those seats. Since Boner and Gass have already served one term, a successful re-election would mean that they are term limited from running for a 4-year term in 2018.

The only sitting commissioner eligible to run for a 4-year term, should he choose to do so in 2016, is Johnny Miller. 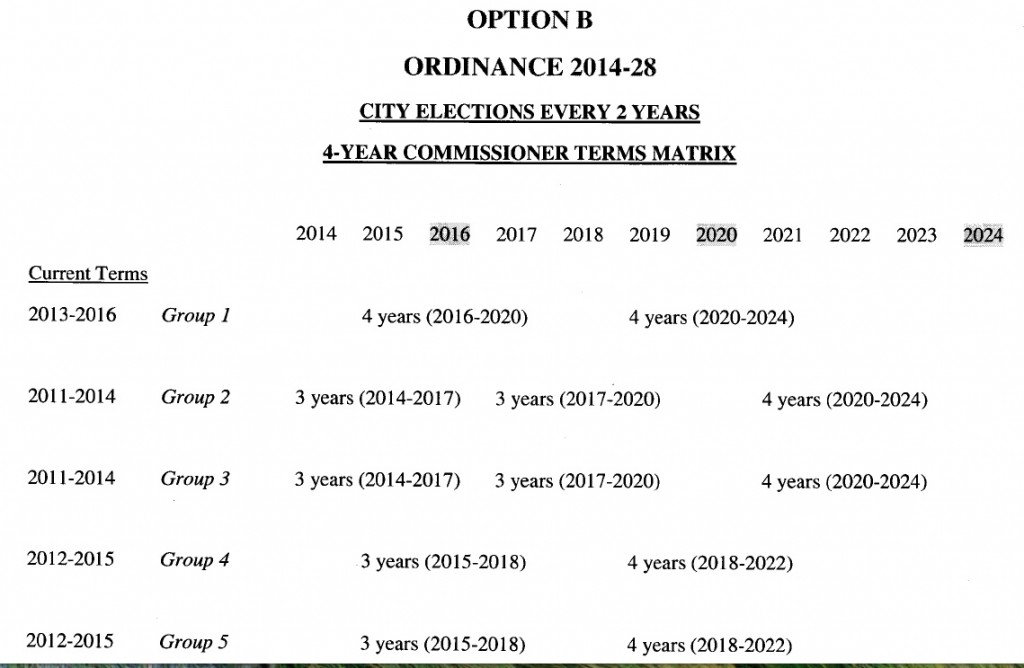 As part of the proposed changes the FBCC did not recommend eliminating term limits or changing the charter with respect to the straw poll for mayor.

At the end of the Special Meeting, Acting City Attorney Valerie Faltemier on behalf of the City Attorney requested a special meeting and executive session for September 2, 2014 at 4:00 p.m. to address the water impact fee lawsuit.

It will be interesting to see how this all comes out in November given that previous attempts were resoundingly defeated.

If one is truly interested in saving money on elections … they should also change the ordinance to eliminate runoffs if someone gets at least 40% in the general election. If you have a 3-way race where at least one candidate gets 40% … the City has to have its own runoff election to decide a winner … it has to pay for the entire election. I don’t believe the State has any runoff after its primaries … regardless of how much the top vote getter gets.