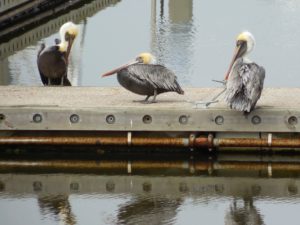 On October 27, 2017, the City of Fernandina Beach advertised for assistance for key projects to begin making structural repairs to the City Marina following the damage wrought by Hurricane Matthew last fall. Now that FEMA approval has been received, allowing for 75 percent reimbursal of expended funds, it is the City’s goal to have the attenuator back in service for Shrimp Festival 2018.

Via separate RFP, the City is also attempting to resolve discrepancies in two 2015 studies on the integrity of pilings and related additional structures supporting a City-owned waterfront structure, specifically Brett’s Restaurant in downtown Fernandina Beach.

The city is seeking professional maritime engineering assistance to review, design and prepare bid/construction documents for two (2) possibly three (3) projects at the City of Fernandina Beach Harbor Marina. In addition, to the aforementioned assistance, the City will alternatively consider design/build proposals for the two (2) possibly three (3) projects.

The complete RFQ is available for viewing on the city’s website www.fbfl.us/bids and the Onvia Demandstar website at www.demandstar.com.  Questions regarding the RFQ requirements or process can be directed in writing to Wanda Weaks, Purchasing Agent, at [email protected]

The City laid out the following scope for the RFQ:

The Marina’s southern attenuator, composed of approximately 1000 feet of floating concrete modules with related amenities (lighting, electrical, water, and fire suppression systems), was significantly damaged as a result of Hurricane Matthew (October, 2016). Several pilings to which the concrete modules were affixed were also significantly damaged. A summary of the damage, as described in FEMA Form 90-91, is available for review upon request. Permitting for this project is currently being sought. This project is considered high priority and efforts should be made to expedite construction.

Unrelated to Project #1 (and associated FEMA funding), the City desires to reconfigure the southern basin docks (from the current east/west configuration to a proposed north/south configuration). The subject docks will support long-term and transient watercraft. Said docks will provide support services such as lighting, electrical, water, and fire suppression systems. Due to the proposed reconfiguration, several pilings must be re-positioned. Permitting for this project is currently being sought.

Separate from Projects #1 and #2, the City has submitted an application to secure grant funding for a northward expansion of three docks (approximately 300 feet each). This project is entirely dependent upon receipt of said grant funds, the award of which is expected in early 2018. The proposed dock expansions will house transient watercraft and include associated services such lighting, electrical, water, and fire suppression systems.

The city is seeking structural engineering assistance to identify and resolve technical differences between two conflicting 2015 reports on the condition and integrity of pilings and related additional structures supporting a City-owned waterfront structure, specifically Brett’s Restaurant in downtown Fernandina Beach. The deadline for RFP responses: November 17, 2017.

The 2015 reports were prepared by RGM Engineering (St. Augustine) and Baker-Klein (Jacksonville). Each report will be made available to potential bidders for review prior to submitting proposals. According to language in the RFP, “In order to maintain the integrity of the review process, the preferred consultant will have had minimal previous interaction with the original authors of the 2015 reports.”

This RFP is available on the City’s website www.fbfl.us/bids and the Onvia Demandstar website at www.demandstar.com. Questions regarding the RFQ requirements or process can be directed in writing to Wanda Weaks, Purchasing Agent, at [email protected].