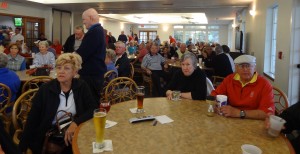 A large crowd  of angry golfers filled the Fernandina Beach Golf Club House to hear a report from Billy Casper Golf and express frustrations and concerns over playing  conditions at the City golf course.  According to John Schroeder, president of the Men’s Golf Association, conditions have deteriorated to the point that tournaments held by the Men’s Golf Association will not take place until improvement is made.

Mike Stevens, regional director of agronomy, acknowledged there are turf quality issues with the City course.  “We have made decisions focused on long range goals that turned out to be not in the best for the short term of  this golf course.”

How did the course conditions deteriorate?

According to Stevens, “Reducing the amount of over-seeding applied to the greens coupled with two mild winters resulted in amplified mole cricket population that attacked healthy turf at an abnormally intensive rate.”   With the aggressive approach to eradicate weeds, the remaining Bermuda grass was destroyed by the crickets. Adding to the problem, “Poa Annua, a cool-season grass that often germinates on the surface of greens rendering them uneven, was more aggressive than in the past.”

Although adding to the poor conditions short term, one positive decision made in the last year was to back down on the over-seed rate.  According to Stevens, for years a heavy rate of rye seed was applied that established great putting surface in winter months but  decreases the opportunity to have a successful summer and contributed to the long term demise of the grass as a whole.

How long will it take to fix the problem?

It was reported that in the next couple of weeks, new sod will be laid. When pressed, Stevens acknowledged it was only 3000 square feet of grass, enough for one green.  There is a need to manage moisture, and air content through a drill and fill procedure that will help manage grass better than was done in the past years.

“Current finances have made it difficult to complete a lot of the capital plan identified during the initial discussion with the City,’ says Stevens. “The decisions we make must be based on how to stretch our operations [budget] to position our course for the long term success. The financial status of the City and our operations has not put us in the place to produce a capital plan and follow through with a lot the capital plan.” Stevens does not place blame on anyone else, including  past operators, or past employees.

Stevens further stated  that during  initial conversations with the City before the contract took effect, Casper  conveyed concerns that  the course was under capitalized and suffered from deferred maintenance practices for many years.  Discussions of the challenges faced include overgrown trees that cast shadows on turf, poorly maintained greens, the extensive age of greens, and bunkers in need of renovation.  “These challenges still exist today.” says Stevens. 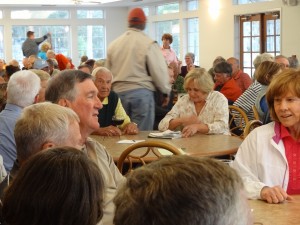 greens.  Golfers complained that pins were being changed frequently causing too many old cups on the greens. Stephens remarked that the City course has 27 of the smallest greens in northeast Florida.  The decision was made to reduce the number of cup changes.  Tee placements are in the same category.  “At times players go behind operations and change tees and make it more difficult for management to control,” says Stevens.  He asked that players help police this situation.

Dan Zimmer, regional director of operations for Billy Casper Golf,  addressed the group.  Zimmer said  the goal was to grow revenue and programs at the club, to have good expense control in place in order to fund capital projects such as greens, cart path, bunkers, and tee box improvements.  “When a course exists that has neglected capital projects, challenges are faced,” says Zimmer.

Zimmer called for support from all those in attendance and said improvement has taken place under Billy Casper Golf since their arrival two and a half years ago. He called attention to the following successes:

Over all improved service, and improved marketing of the course resulting in increased out of market play. Improvement in the driving range facilities, including new netting, and  increased tee size in the driving range.  Acquisition of much needed new equipment, and completion of excavation work to clean up ponds, and tree trimming that over time will result in long term improvements. 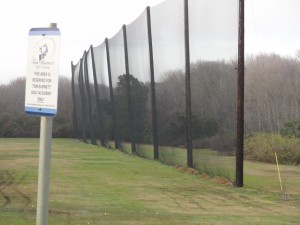 Zimmer said the FBGC is an important property for Billy Casper Golf.  According to Zimmer, the more they increase revenue the more  incentive for them,  and the more they can put money back into the property.  Casper is not here to manage an operation for the length of contract and to collect management fees.  They want to be here for an extended period of time.  “When individuals ask about Billy Casper Golf, the company wants a positive response,  so a lot of resources and time looking at issues and trying to overcome problems is important to them,” says Zimmer.

Questions asked by those who gathered showed strong emotion.

“This course has never looked this bad. Is it lack of capital or competency of Casper Golf?

Will you have enough members of this club to pay for anything?

From a member in charge of the golf blitz – “I’ve lost so many people [participants]it is unreal.  Many empty promises.”

“We were told the course will get better, and it has not happened.”

“Why do we need to believe you now?”

“How long do we need to wait?”

“It must get better.  I use to play this course three days a week for 10 years, I don’t play anymore.  If you don’t have a good golf course people won’t want to play.”

“When will we be on par with Amelia River?” (Answered by Zimmer, “When we are forty years younger.”)

Doug Bailey, chair of the Golf Course Advisory Board, tried to put a positive spin on the arrival of the Billy Casper Group by noting the improvements made.  “During the course’s peak there were  69,000 rounds a year.  Now the rounds barely reach 50,000,” according to Bailey.  He concluded that the economy had a lot to do with the decrease in rounds which caused grumblings from the crowd.  Bailey continued to voice support for the efforts of Billy Casper Golf.

Tony Cianci, vice president of operations, said this was not the first time he has addressed a group concerned over golf course issues.  “When in the development phase of a golf course, a plan is put together to do the normal day to day steps to improve turf as quickly as possible.  Sometimes turf improvements take backwards steps, but at the end of the day when you look at a golf course that was full of weeds, it takes awhile for the turf to work back in those areas,” says Cianci.  “It is a step by step process that can’t happen overnight.”  He expressed confidence that “the course will get better and Billy Casper will work to improve  the course to a position that individuals will be proud to play on and proud to have guest play.”

Casper representatives acknowledged the meeting was long overdue.  “It [the condition of the course] is not something we are proud of and not something we expect.  It is a situation that is out there and we are going to deal with it. Billy Casper’s goal is to be the best public golf course in northeast Florida.” Representatives said that “in the long term, capital improvement projects need to get done to see a successful course 10 to 15 years in the future.”  The Billy Casper Group was hired in 2010 to manage golf Course after being managed by the City of Fernandina Beach.

Full disclosure from Co-Editor Susan Steger: I  served on the commission that made the decision to hire Billy Casper Golf to manage the City golf course.  In addition to attending the meeting, I requested clarification and additional information from Billy Casper Golf  representatives.  My focus was to provide accurate information on the turf problem, and information on how long it will take to fix.