The Fernandina Beach City Commission (FBCC) met in workshop session for about 90 minutes the afternoon of August 6, 2014.  Although no votes were taken, the sense of a majority of the commissioners was to eliminate funding for the Nassau County Economic Development Board ($25K); hold off on funding public Wi-Fi for the downtown area until security and liability issues can be further discussed; redistribute Capital Improvement Plan funding for the library expansion and Martin Luther King Center restroom expansion from the current year into FY2014/15, because work will not be completed this year.  Commissioners also discussed renegotiating the city’s management contract with Billy Casper Golf.

City Manager Joe Gerrity began the meeting with a slide presentation explaining where the city was in facing the FY2012/13 budget, and where it is today.  He recapped former Interim City Manager Dave Lott’s depiction of the perfect storm at the end of FY2011/12 when the city faced a budget crisis due to a combination of events including beginning the next budget year with a financial position not as strong as expected, anticipating continued declining revenues and new expense obligations to fund capital expenditures, increase pension contributions and fund beach renourishment and reserves.  At that time the only viable solution was a combination of significant expense reductions balanced with revenue increases.  Therefore, the millage rate and the FPU franchise rate were raised to generate additional revenue, 18 full-time city positions were not funded for 2 fiscal years, and General Fund dollars were transferred to the Golf Course and Marina in order to prevent their negative cash positions from getting worse.

In the current 2013/14 fiscal year, the city’s General Fund cash position is stronger than anticipated.  Gerrity anticipates that expenses will be well under budget, resulting in a strong ending General Fund Reserve position.  The city by the end of the year will have transferred a total of $736K to the Golf and Marina funds, paid the second installment of $200K to the Nassau Humane Society for construction of a new shelter; increased the Beach Reserve by $100K; and continued to fund its share of the library expansion effort. 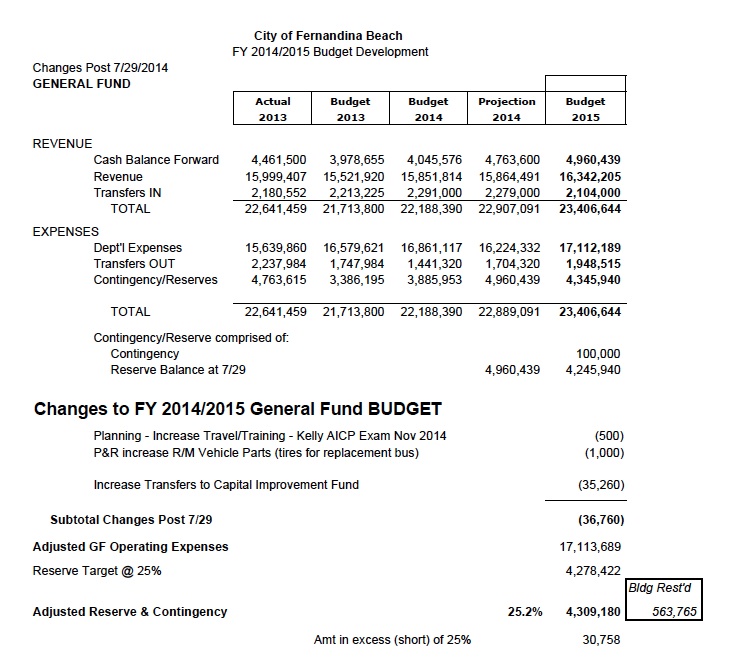 Included in Gerrity’s FY2014-15 Budget Proposal is approximately $130K for fleet replacement expenses and a plan to increase the beach renourishment reserve to $400K.  His final slide presented a list of future needs for the FBCC to consider in formulating the FY2014/15 budget or the next one: 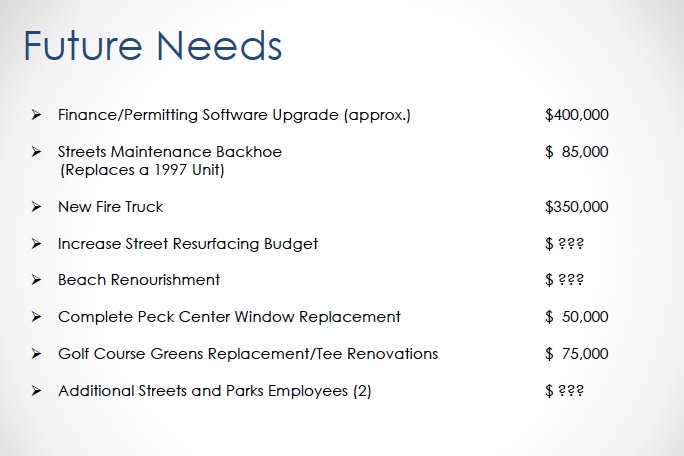 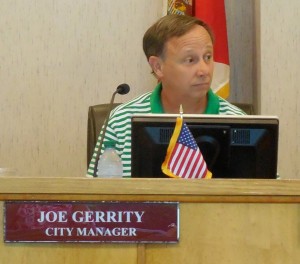 When he opened the floor to questions, Commissioner Johnny Miller asked about the funding source for city bathroom improvement and expansion.  Gerrity replied that the MLK Center costs would be paid from impact funds, while the Central Park improvements would come out of the General Fund.  With respect to Miller’s question on beach renourishment, Gerrity said that it looks as though beach renourishment can be put off another year.  This September the City and County will meet to discuss funding beach renourishment.  In response to a Miller concern Gerrity said that he too had received complaints about overgrown grass on city property, but that existing staff was working as fast as they could.  Gerrity is considering hiring two part time people to keep up with the work.

Commissioner Pat Gass questioned why the city would be spending $17K to provide free Wi-Fi service downtown.  She cited problems that her business had encountered with such service and wanted assurances that the city would not be liable for charges resulting from illegal movie downloads via its Wi-Fi.  Gerrity said that the commission could decide not to fund this initiative. 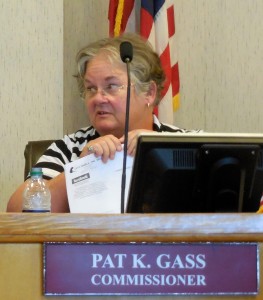 Gass also asked about the value to the city in funding the Nassau County Economic Development Board (NCEDB) in the amount of $25K.  She believed that the money would be better spent if it were transferred to Retail Strategies http://www.retailstrategies.com , a company that markets local retail properties to meet the needs of a particular community in considering that community’s demographics.  Mayor Ed Boner said he would prefer a read from the Chamber of Commerce before committing to this company.  Gerrity acknowledged that if the FBCC cut the amount in half, he could release the airport funds committed to the project, thereby helping alleviate FAA concerns over the city’s use of airport funds.

Boner refocused on the NCEDB funding, claiming that he believed this was a good investment because even if it only brought businesses to the county, the people associated with the businesses might choose to live in the city and would visit its businesses.   Gass said that she did not want to see the city put all its economic development marbles in one basket, but spread them to other baskets as well.

Commissioner Corbett said, “Can you name one thing NCEDB has done for the city?  What you are telling me is that they haven’t done anything.”

Gerrity added that NCEDB assistance had been crucial in the city’s development of the Economic Development element for its Comprehensive Plan. But the FBCC did not support any continued funding for NCEDB in next year’s budget.

City Comptroller Patti Clifford briefed the commissioners on the City’s Five-Year Capital Improvement Plan, highlighting expenses that will occur in the 2014/15 Fiscal Year, including but not limited to:

Clifford explained that since there has been no movement on the issue of historic Post Office ownership, the $300K of impact fee money programmed to seal the envelope of the building to prevent further deterioration has been pushed off by another Fiscal Year.

Gerrity reported that the new city parking lot at 2nd and Broome Streets is underway.  When completed, the city will build a sidewalk to connect it to Alachua Street. 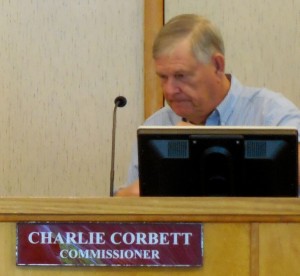 The issue of the municipal golf course and Billy Casper Golf’s (BCG) offer to invest $50K to rebuild greens was raised.  The deadline for planting grass for this season is mid-August.  Gerrity reported that the project is dead for this season, but might be possible next year according to BCG representative Dan Zimmer if the city and BCG can come to agreement on contract extension terms.  Gass said that she did not want to extend the contract without including oversight terms for BCG.  Gerrity reported that BCG has indicated that it is open to suggestions for a new contract, but they won’t invest $50K on a year-to-year contract.  Pelican said that currently there is no accountability in the contract.  Corbett said, “[Extending their contract to 6.5 years] is not happening while I’m here.  Gerrity admitted that the ball is in the city’s court and that he has not gotten back to BCG with a contract proposal.  He said, “Consensus seems to be that the city is looking for a new contract.”  Miller added, “There may not always be 27 holes on that course.”  Boner asked that benchmarks and reasonable goals be included in a new contract.  Gerrity and City Attorney Tammi Bach will work on language and report back.

Gerrity said that he would like to replace the carpeting in the clubhouse before the Bonham’s event next year.  He suggested using part of the $30K Bonham payment to the city for that purpose.

Mayor Boner raised his concerns over stormwater problems on North Fletcher.  Vice Mayor Pelican added that roadwork has made the situation worse.  Gerrity said that he would work on that.

Patti Clifford reminded commissioners that the city will shift some of its funds committed to the library project to next year’s budget because the project will not be completed in this fiscal year.  Commissioner Pat Gass asked that commissioners and staff stop referring to the library as “our” library.  She said, “We don’t have a library; we own the building that houses the Nassau County Library branch.”

Gerrity asked for commissioner input from the commissioners for the next budget workshop scheduled for Tuesday, August 12, 2014 at 4:00 p.m.  There was none, but Commissioner Gass said she would send input to Gerrity.