Toward the end of the January 20, 2015 Regular Meeting of the Fernandina Beach City Commission (FBCC), Commissioners turned their attention to the city golf course and the Billy Casper management agreement. City Manager Joe Gerrity reported that he had been in discussion with Dan Zimmer of Billy Casper Golf (BCG) and that the parties had reached agreement on a 5-year contract, which is currently being run through BCG’s legal department. Commissioners voted unanimously to proceed with preparing a new 5-year contract that would reflect BCG’s contribution of $50,000 toward greens improvement. The contract will return for FBCC action on February 17, 2015.  By consensus the FBCC appointed the city manager to serve as the city’s golf director.

Josh O’Brien, General Manager of the city golf club, walked commissioners through a slide presentation that he had prepared along with Bruce Smyk, Chair of the city’s Greens and Oversight Committee, on the current status of the golf course. Course condition updates were positive, and photos comparing improvements showed marked improvement over the state of the greens five years ago. O’Brien also talked about marketing efforts to bring more customers both to play golf and to participate in other activities such as themed dinner nights. He talked about an upturn of bookings for weddings and banquets. 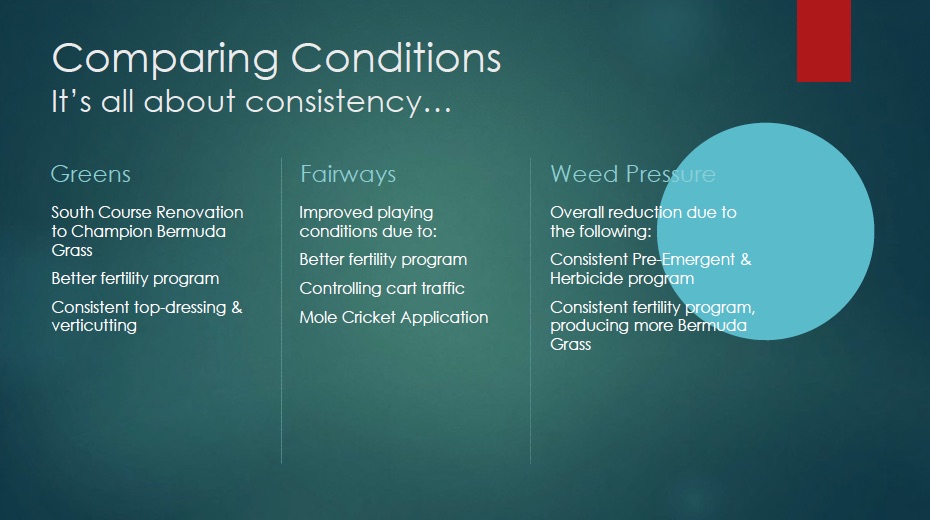 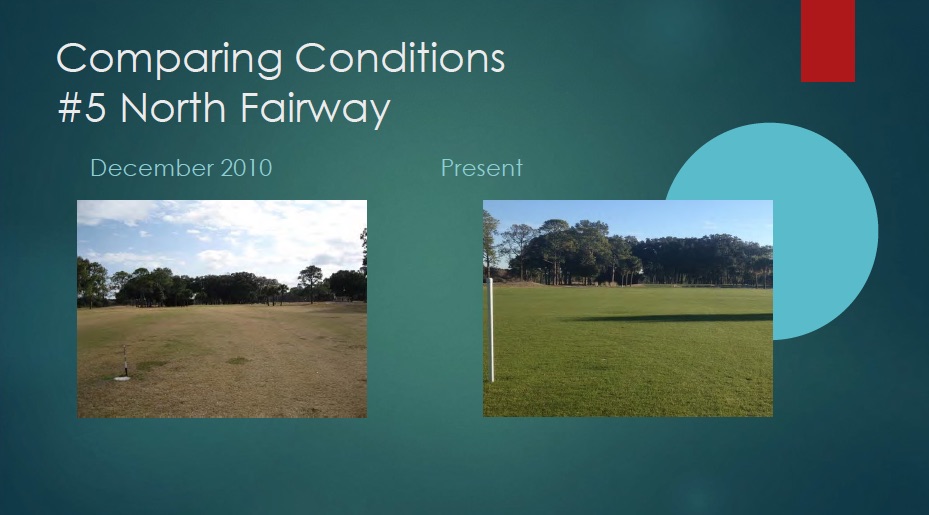 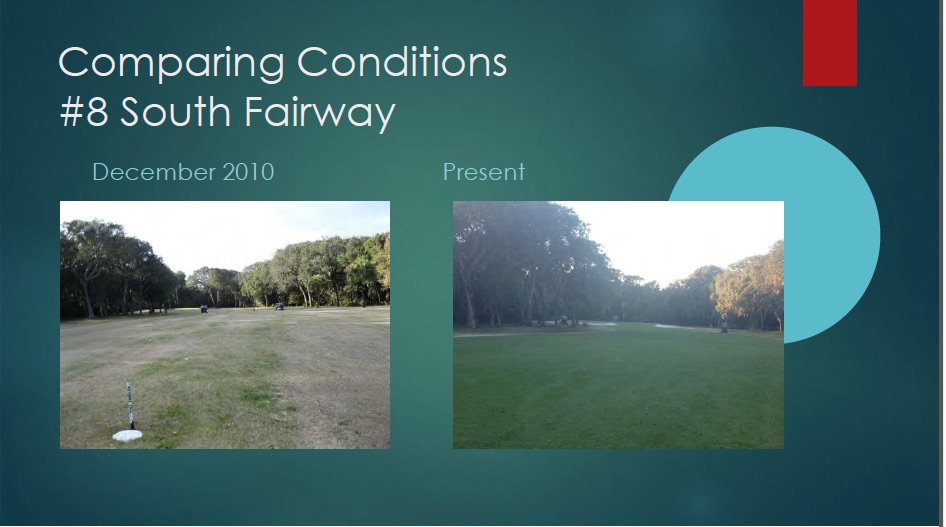 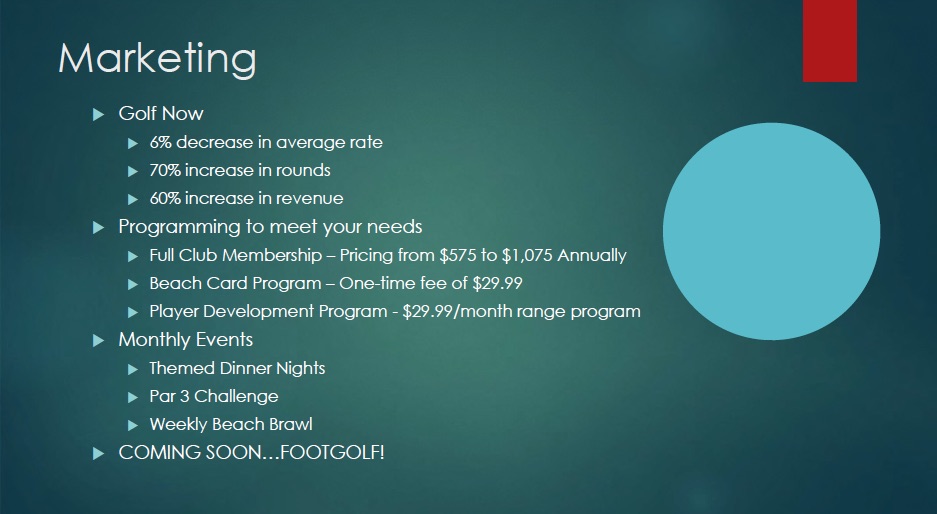 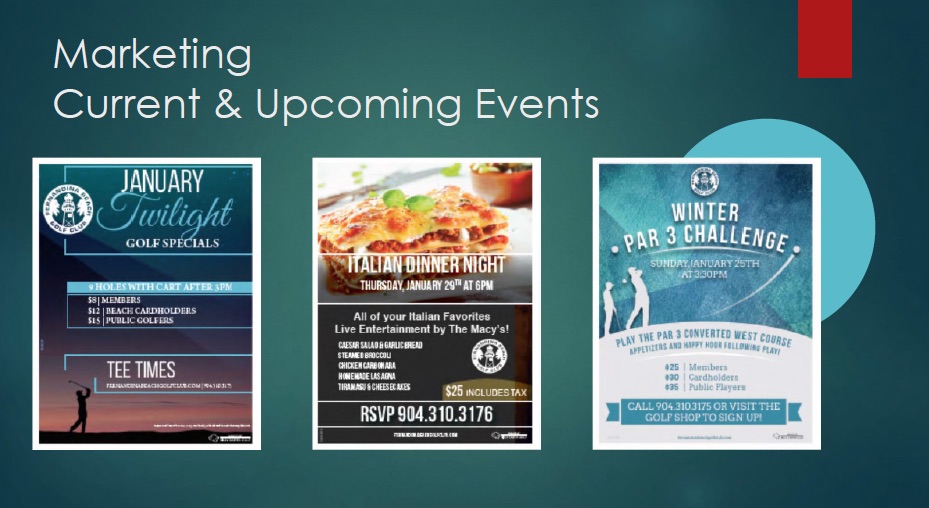 Gerrity commended course superintendent David Hillhouse, saying that while the previous superintendent built the foundation, Hillhouse “built the house.” He cited numerous compliments that he has received on the improvements at the course. “I’ve lived her 20 years,” Gerrity said, “and this is the best I’ve ever seen it. It says a lot for where we were two years ago.” Gerrity also informed commissioners that the city is installing new carpeting and bathroom tile as part of gearing up for the Bonham’s car auction event to be held at the city golf course in March. Gerrity reported that he has been pleased with the marketing of the facility for special events and has spoken with O’Brien about more active marketing for the pro shop. “Other than the hiccup we had when I first got here, I think you guys (BCG) have brought the course up to where it needs to be,” Gerrity said.

Commissioner Robin Lentz asked about food and beverage management. O’Brien replied, “Fantastic.” He cited recent accomplishments. She also asked about membership. O’Brien said that rounds have remained fairly consistent but that he is analyzing trends and changes in golfing categories that impact membership.

Commissioner Pat Gass referred to the RFP and existing management agreement. She said that according to her calculations, which Gerrity confirmed, the city has paid BCG $312K for the first three years of the contract, and BCG has brought in $1,792,500 in revenue. She wanted to verify that each party is living up to its end of the existing agreement.

Bruce Smyk, Chair of the Greens and Oversight Committee, addressed the FBCC. He distributed a memo to the commissioners reporting the committee’s unanimous vote to extend the contract with BCG as proposed. He said that the course is in terrific shape and that if they have been doing it without accountability to the city, they have done a great job. He went on to cite the many requirements levied on BCG via the RFP that resulted in award of the current contract. He concluded by informing commissioners that there is a provision in the agreement that requires BCG to report monthly as to 7 different areas of operation, and that the city “shall appoint a golf director to whom BCG will report.” Smyk said that to his knowledge, that has not been done. He said that he and the committee have felt frustration because the city has never asked them for input. “We are inputting ideas monthly,” he said. “Some of them get followed, some don’t, some probably due to financial restrictions. But we would like to be at your service, and we would like you to call on us.”

Commissioners had a brief discussion over whether the charges to the committee needed to be more finely defined to clarify expectations. Smyk said that he felt it was incumbent on the city commission to appoint someone to be a permanent liaison to the city, and that the committee would be happy to assist that person in going over the 7 reporting requirements each month. By consensus the FBCC decided that the “golf director” is the city manager. Joe Gerrity expressed his satisfaction with that decision and reminded Smyk that his door is always open to discuss matters of importance to the committee. “I will make an attempt to get to some of your meetings,” Gerrity said, “and at least sit in and listen.” 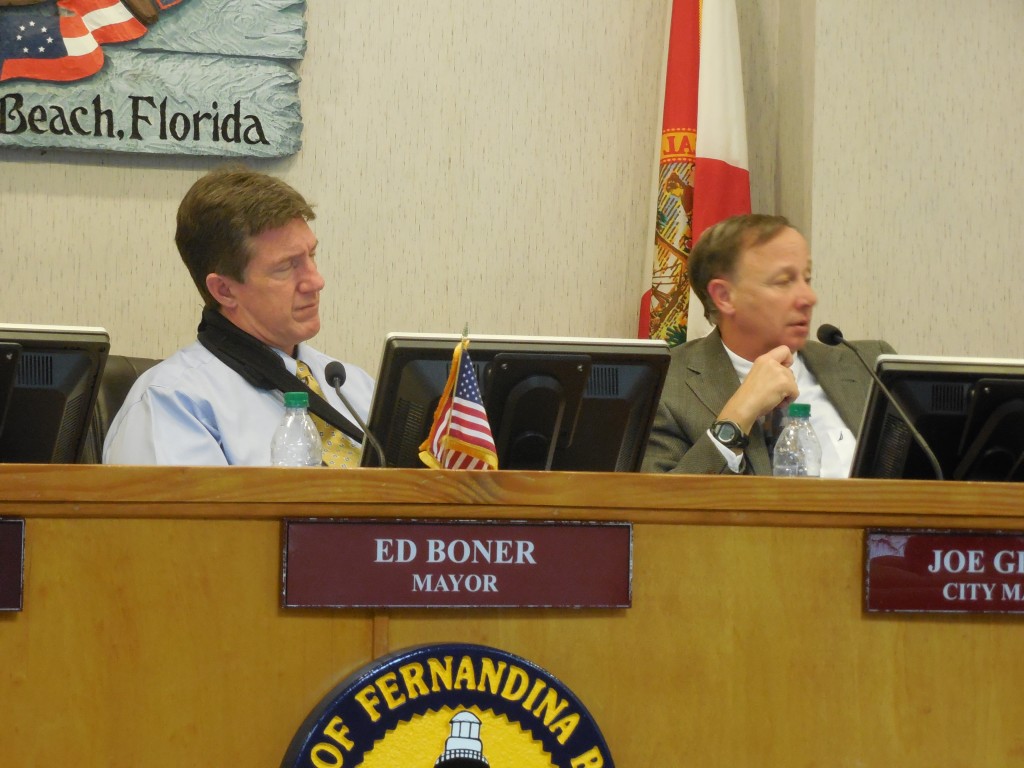 Mayor Ed Boner wrapped up the discussion by summarizing that the committee in meeting with its commissioner-liaison would come up with a list of tasks that they felt they should be doing and bring it back to the commission. Poynter agreed, and City Attorney Bach agreed to provide commissioners and committee members with a copy of the resolution that established the Greens and Oversight Committee and set out its duties. Bach suggested that following discussion, that list of duties might need revisiting.

Smyk said that his understanding was that BCG’s offer to invest $50,000 in improving course greens was part of the new contract, but that work on those greens needs to begin soon to show an impact this year. Gerrity said that he hoped to have the contract back to the FBCC for its action at the February 17, 2015 Regular Meeting. Bach asked if commissioners had any changes that they wanted. Gerrity said he felt that the existing contract had enough enforcement power for him to feel comfortable. Poynter moved to prepare a contract that would include the $50,000 BCG contribution as part of a 5-year renewal, and Lentz seconded his motion, which passed unanimously. Hillhouse said that action in February would allow him sufficient time to begin work improving the next section of the greens.

Commissioners relayed favorable comments they had received individually on the condition of the course. They thanked Josh O’Brien and Bruce Smyk for their reports.

Kudos to all those that have worked diligently the last couple of years to overcome the difficulties the course has faced. While the short-term tactical actions need to continue to be addressed, the longer term issues of overall course design and refurbishment need to examined as well.
Thanks again.

Richard,
The Golf Course Enterprise Fund (as are all the enterprise funds) are part of the overall City budget. All expenses are paid for and charged to the golf course enterprise fund including this expenditure. If there is a shortfall in revenue compared to expenses, then a transfer from the General Fund is required to cover any deficit and such a transfer is clearly shown as a line item in the golf course budget. In the current budget (which forecasts a revenue deficiency of 185,000) there is an allocation of $3,000 for repairs/maintenance to the clubhouse so I suspect that is the placeholder. It should be noted that the debt service (incurred before BCG took over) is about $252,000 per year so absent that expense, from an ongoing operating standpoint the golf course is paying its way.

I don’t know why people keep talking about “without the debt service cost” … the golf course is paying its own way. Is the golf course deriving any benefit from whatever that debt was used to buy? Of course it is. So stop making this crazy assertion which is absolutely meaningless except to try to convince fiolks how great the golf course is. If you have student loans … do you say that if not for them … you’d be solvent and paying your own way? Of course not. It is as much part of your financial situation as any other expenditure.

Does the enterprise budget factor in any depreciation of its assets (I don’t see any) … or do they just assume the City will cover these major replacement costs or borrow the money for them to pay for it. And then you can say “except for that debt” … you’re paying your own way. Because you are not.

“No one was so worried when they cut down all the tree...
wpDiscuz
4
0
Would love your thoughts, please comment.x
()
x
| Reply
Comment Author Info