Mayor Sarah Pelican proclaimed the month of October 2013 as “Domestic Violence Awareness Month.”  Elaine Coats, chair of the Micah’s Place board, accepted the proclamation, accompanied by several other board members.  She thanked the FBCC for its support.

The mayor also proclaimed the week of October 20-26, 2013 as “Florida City Government Week.”  She read the proclamation into the record and said that the city will forward it to the Florida League of Cities.

In an attempt to reduce the time between city elections and new commissioners taking office, the FBCC unanimously passed Resolution 2013-142.  This resolution will allow the annual reorganization meeting to November 6, 2013, if no run-off election is required.  If there is a run-off, the new commissioner will take office on December 17, 2013.  Commissioner Arlene Filkoff will remain in office until the reorganization meeting, as will Mayor Sarah Pelican.  This item was listed on the Consent Agenda and generated no discussion. 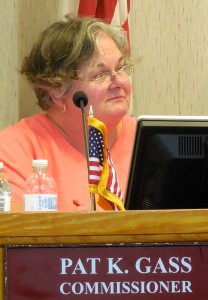 Another Consent Agenda item, however, was pulled for further discussion.  Commissioner Pat Gass asked to have Resolution 2013-141 (approving an amendment to the FY 2013-14 Budget for non-profit grant allocations) removed from the Consent Agenda so that she could register her opposition once more to public funding of non-profit organizations.  This Resolution reflected the allocation decisions the FBCC made to distribute $10,000 to meet grant requests at a previous meeting and passed on a 3-2 vote (Gass and Pelican dissenting).  Gass acknowledged that the item would probably be approved, but that she wanted to be consistent in her opposition to the practice.  When the vote was called, Mayor Pelican hesitated and indicated that she “agreed with Pat, but for different reasons.”  Pelican voted to support the measure, which passed on a 4-1 vote, because she had agreed previously.

After deciding that spending $35,000 in annual repairs on the city street sweeper was not cost effective, City Manager Joe Gerrity brought Resolution 2013-143 to the FBCC, recommending the lease purchase on a piggyback agreement for a 2013 Elgin Crosswind Street Sweeper under a 5-year lease with an annual payment of $43,000.  In passing this resolution on a unanimous vote, the commission also declared the current street sweeper surplus.

Community Development Director Adrienne Burke presented Ordinance 2013-33 to the FBCC on first reading.  This ordinance contains updated Historic District Design Guidelines covering both downtown and Old Town.  The guidelines were last updated in 1999.  Standard practice is to review every 5-10 years.  The updated guidelines were developed through a Florida Division of Historic Resources grant for $19,500 and were approved by the Historic District Council in final draft on July 18, 2013, and by the state on September 16, 2013.   According to Burke, the updated guidelines provide more graphics and are more user friendly.  They are available in both hard copy and electronic format.

Commissioner Pat Gass allowed that she had read over the new guidelines several times and had difficulty determining what had changed.  Burke replied that the update took into account the greater variety of new materials that are acceptable for use in historic districts today.  She emphasized that whereas the original guidelines had been long on words and short on photos, the update provides many more visual examples to show historic property owners what is recommended in the way of historic building repairs and modifications.

Mayor Pelican expressed her frustration with trying to access the document online.  Burke replied that because of the file size, loading the document from the website takes time.  Vice Mayor Charlie Corbett verified that the guidelines were accessible on the city’s website and that they could also be seen in hard copy.  Burke confirmed that hard copy was available for people to consult at City Hall.

Local business owner Joan Bean addressed the Commission on her concerns over downtown parking associated with new projects.  She said that while it was good that parking areas should be made attractive, she felt it was more important that new projects be required to provide additional parking.  CDD Director Burke reminded Ms. Bean and the FBCC that the parking requirement is covered under the city’s Land Development Code, not the design guidelines, which only address design.

Commissioner Ed Boner asked whether the use of new materials might help historic property owners with their insurance rates.  Burke responded that the historic preservation community is moving toward embracing new materials as a way to make living and working in historic buildings more comfortable and cost effective for building owners.

Although the ordinance passed unanimously on first reading, both Gass and Pelican expressed the hope that they will better understand the changes when the ordinance comes back for final reading.  Burke offered to meet with commissioners individually to review the guidelines and respond to any questions.

City Manager Joe Gerrity expressed his optimism in moving forward with several annexations and library expansion.  He also thanked city staff and commissioners for their work to produce the FY 2013-14 Budget.

Interim City Clerk Kim Briley announced that the city was seeking volunteers to serve on the pension boards and the Planning Advisory Board. 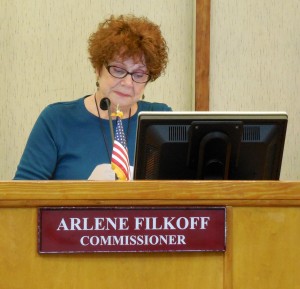 Commissioner Arlene Filkoff reminded the audience that the City Election will be held on November 5, 2013.  She expressed her hope for a good turnout, despite the fact that this is an off-year election.  She also reminded commissioners that there will be a Candidates Forum in City Hall Chambers from 7-9:00 p.m. on October 22.  She reported that according to a Tourism Development Council press release, Conde Nast has named Amelia Island to its list of 25 Best Islands worldwide.  They also named the Amelia Island Ritz Carlton and Elizabeth Point Lodge to its list of 40 top beach resorts.  Filkoff asked City Manager Gerrity if he had set up a line item in the city’s budget to provide for funding for the Amelia Island Museum of History.  Gerrity replied that he was fine with setting up funding for the Museum to parallel the action the city has taken with respect to the Nassau Humane Society.  Both non-profits receive financial assistance from the city in return for providing direct service.  Gerrity said, “If that’s the consensus of the commission, that’s how we’ll do it next year.”  There were no objections voiced by commissioners.

Commissioner Pat Gass asked for a status report on the city’s purchase of the triangular lots in Old Town.  Both City Attorney Tammi Bach and City Manager Gerrity said that one of the owners of a triangular lot is moving forward to obtain a permit to build.  This statement prompted Old Town resident Ron Machado to speak to ongoing problems with building on these lots and his opinion that the lots are not buildable.  Gass reassured Machado that the discussion of this issue is in early stages and city staff or the city commission has made no decisions.  Gass also asked Gerrity to double-check with the Shrimp Fest Committee to see if they had approached Advanced Disposal about assistance with the festival’s $33,000 annual clean up fee.  She said that she hoped the matter could be resolved before spring.  Gass also asked to see a report on whether it would be beneficial for the city to stop operating the municipal golf course as an enterprise fund and make it a city department financed under the general fund, since the city is subsidizing the golf course.

City Comptroller Patti Clifford in agreeing to do so reminded commissioners that before the golf course took out loans to build the clubhouse and make improvements it was profitable.  She added that should the FBCC decide to change its status to a city department the debt would come along with that decision to the General Fund and affect the city’s reserves.  Clifford will report back to the commission with more detail at a future meeting.

Commissioner Ed Boner encouraged candidates for city commission to use this time to meet with city commissioners to discuss ongoing issues and business.  He reminded them that after the election, they will not be able to have such discussions.

Vice Mayor Charlie Corbett thanked Commissioner Filkoff for her service, on behalf of the city, since Filkoff could be leaving the commission at the next meeting, if there is no run-off election.

Mayor Sarah Pelican called attention to the state of the restrooms at the MLK Center.  Gerrity said that there is money in the budget to effect expansion and repairs and that he would start the engineering work for the project.