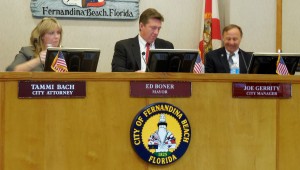 The Fernandina Beach City Commission (FBCC) adjourned its November 5, 2014 Regular Meeting after only an hour and four minutes, handling a non-controversial agenda that included a 2-item consent agenda, 6 resolutions and first reading of an ordinance to provide for voluntary annexation of 1.30 acres located at 1505 South 14th Street (Steve Johnson Automotive).  The commission made three board appointments and listened to concerns of neighbors with respect to parking spaces, screening and landscaping various mechanical features of the expanded library building.

While three proclamations had been placed on the agenda, only one recipient was in attendance.  Cara Curtin, Chairwoman of the American Indians Committee of the local DAR Chapter, accepted the proclamation recognizing the month of November 2014 as Native American Heritage Month and November 28 2014 as Native American Heritage Day.  Mayor Ed Boner also proclaimed November 2014 as Pancreatic Cancer Awareness Month and National Chiropractic Health Month.

Andy Curtin expressed appreciation to the commission with a gift of calendars on behalf of the Experimental Aviation Association, expressing his sincere regret at Vice Mayor Sarah Pelican’s election defeat and wishing Commissioner Charlie good luck in the run-off election next month.

The FBCC supported City Attorney Tammi Bach’s request to add an architect to the Code Enforcement and Appeals Board.  She explained that she had recruited Benjamin Morrison to apply for the position because the city has a need for architectural expertise in reviewing various cases that could lead to demolition orders for abandoned buildings.

On a 3-2 vote (Commissioner Johnny Miller and Mayor Ed Boner dissenting) the commission appointed Shelly Rawls to the Historic District Council.  Miller and Boner supported appointment of the second applicant Robert Psulkowski, who had been strongly supported by the downtown merchants.

Commissioners unanimously supported the reappointment of Pranab Das to the Parks and Recreation Advisory Committee.

Patricia Davenport of Environmental Resources represented concerns of residential neighbors relating to the expansion of the city building at Alachua and N. 4th Streets housing the Nassau County Library Branch.  She asked that all horizontal work on the building be halted until their concerns with respect to screening mechanical structures on the roof, utility placement, parking, and landscaping are addressed.

Commissioner Pat Gass said, “Personally, I’d like to see you get everything you want.”  However, Gass questioned the costs for the changes and who would pay for them.  She reminded commissioners that the city and the county had opposed paying for any change orders.

City Manager Joe Gerrity said that he was very comfortable with meeting the citizens’ requests for ground level landscaping that would involve no construction delay.  As far as removing 4 parking spaces so that they might be replaced with landscaping, he deferred to the commission.  Gass said that she was not in favor of eliminating parking spaces downtown.

Deputy City Manager Marshall McCrary, in response to statements that utility locations had changed following plan approvals, said that as far as he could determine, that had not happened.

Davenport said that the neighbors were also working with the Friends of the Library on their concerns.  Julie Ballard, a neighbor, cited her 40-year residency in the neighborhood and asked the commission to soften the effects of adding the mechanical elements and utility boxes to the building.  She said that she wants to preserve the integrity of the Historic District.

Mayor Boner concluded the discussion saying, “Money’s the issue for us.”

In response to a question from Commissioner Johnny Miller, City Manager Gerrity reported that in an attempt to solve storm water problems at Main Beach, the city had recently excavated a “storm structure” that has been in place for 30 years, but which had been buried over time.  He said that once construction is complete, the area will be grassed and will look attractive.

City Clerk Caroline Best reported that the Supervisor of Elections has scheduled a meeting of the Canvassing Board for Friday, November 7, to conduct a recount of votes on the referendum to change the city charter to provide 4-year terms for city commissioners.  The recount was triggered automatically because of the 14-vote margin in defeating the measure. 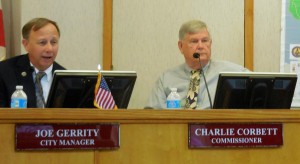 Mayor Boner congratulated Commissioner-Elect Robin Lentz, who was in the audience, and offered condolences to Vice Mayor Sarah Pelican on her loss.  He reminded the public that the run-off election between incumbent commissioner Charlie Corbett and challenger Tim Poynter would take place on December 9.  City Clerk Caroline Best confirmed that the date of the run-off and that the commission’s reorganizational meeting would be held on December 16, 2014.