Sometimes the most interesting discussions occur at the end of Fernandina Beach City Commission (FBCC) meetings.  Such was the case at the November 5, 2019 Regular FBCC Meeting, which did not adjourn until 9:50 p.m.  This article is the second of two covering discussions that occurred at the end of that meeting concerning the waterfront and the marina.

With the indulgence of Commissioner Mike Lednovich, Commissioner Chip Ross moved on to his second discussion point at the end of the November 5, 2019 Regular Meeting:  the city marina.

After reading the marina’s mission statement, Ross briefly explained the purpose of an enterprise fund, of which the marina is one.  He cited government accounting standards that apply to enterprise funds.  In so doing, he attempted to explain why the marina debt is secured solely by a pledge of the marina’s net revenues from its fees and charges.  He said that the marina’s costs of providing services, including capital costs and debt are to be paid with fees and charges, rather than with taxes or similar revenues. The marina debt is also secured by the full faith and credit of the City.

Ross cited the approximate marina debt after anticipated FEMA payments as $7,100,000.   He claimed that to eliminate the debt and bring the fund into compliance with enterprise fund requirements, annual payments to the Marina Enterprise Fund must be made from non-tax payer revenue as provided below:
• if amortized over 10 years – approximately $1,000,000 / year
• if amortized over 20 years – approximately $500,000 / year

Later in the meeting, City Manager Dale Martin said that Ross’ figures were too low and the  $12-15M repayment was more realistic.

Ross said that for a clear understanding of marina debt as well as the marina’s expenses and revenue opportunities, there needs to be a better understanding of what property is included with the marina, and what is not.  Certain assets and operations would seem obvious, such as docks, the boat ramp and the mooring field, fueling and pump out operations.

He explained that other areas and operations could be more problematic.  If they are considered part of the marina, as opposed to city park, the marina enterprise fund would benefit from any revenue they produce but also be responsible for maintenance and repair expenses:

Ross also provided a slide with estimates of future marina expenses covering some of the items above along with ongoing dredging expenses and possible expansion of the marina northward. 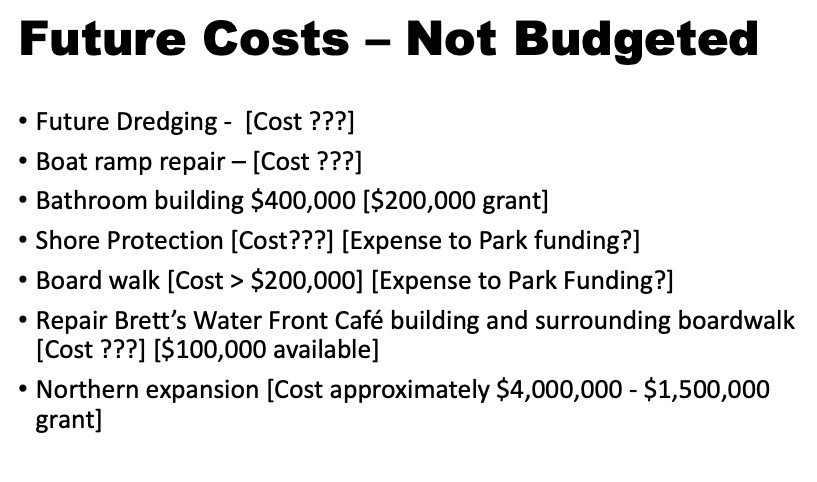 Current sources of revenue, which are insufficient to retire the debt, include:

Ross suggested several possibilities for increasing marina revenues, while allowing that alone such activities could not eliminate the debt:

Ross explained that by using newly acquired properties for commercial purposes or anchoring a barge restaurant in the river, incomes from those operations could be used to pay down marina debt.  He suggested that if the city decides to keep those properties as parkland, then consideration should be given to the city’s paying off the marina debt from its reserves, money not constrained by the enterprise fund.

Ross sought discussion from the other commissioners on options for going forward, which he identified as:

Vice Mayor Len Kreger was first to respond.  He said that 101 Front Street has been designated as park.  “That was the logic we used in moving forward with eminent domain on the Simmons property [which lies between this property and the city’s Parking Lot A].”  Kreger went on to say that the city should reimburse the marina funds used to purchase that property with impact fee funds.  “We set the stage that the land would be used for park when we voted 5-0 to proceed with eminent domain.  We can’t keep changing our minds.”

“How are we going to solve the dilemma of marina debt?” Ross asked, adding that he has been bringing up the issue for the past year.  “In the not too distant future, we are going to have to decide whether to pay off this debt via ad valorem taxes—which goes against the accounting rules—or something else.”

Kreger agreed that a solution needs to be found.  He suggested that the FBCC needs to develop a strategic plan for eliminating both the marina and golf course debt at the next FBCC visioning session, to be held in January 2020.

Commissioner Phil Chapman said that he believes the FBCC needs to put its faith in the City Manager to develop options and plans for dealing with the problem.  “We have to be open to change.  We have to have the courage to buck the “we’ve never done this before” element.  We need to have the courage to be creative.  We need to let the City Manager develop these options.  That’s why we pay him, and I think he does a good job at coming up with alternatives.  We just need to be courageous enough to face the hard decisions coming down the road.”

City Manager Dale Martin thanked Chapman and informed the FBCC that the City had just received the final report from Stantec outlining a path to reduce the debt. “It’s not easy,” Martin said, “and if you remember in their preliminary report, they said that you would need to invest part of your reserves to pay down the debt.”  He said that the Stantec plan required subsidies from the City’s General Fund over 10 years to eliminate the debt.  The City currently subsidizes the marina by about $300K per year, and the Stantec plan would double that amount.  Martin emphasized that the City does have the money in reserve, but sometime during the current fiscal year, the FBCC will need to decide whether to proceed as Stantec recommends.

Martin said that Ross was asking how to make the marina enterprise fund sustainable going forward.

Lednovich asked what ideas had come from the Marina Advisory Board.  Ross replied, “Nothing significant.” Ross also confirmed that there is insufficient room at the south end of the marina property for a boat storage or boat repair facility.

Lednovich said, “I really think we need to dispel the myth that we have a working marina.  It used to be, when it went all the way to the Port, because all that shoreline was marina related.  Now that is gone.  The shrimp fleet is not coming back here.”

Mayor John Miller said that the discussion had gone far enough for the evening, and that it probably should be continued in a workshop.  “Let’s invite the Marina Advisory Board and all the key players.”  The decision was ultimately made to include this topic in the Commission Visioning Session in January.