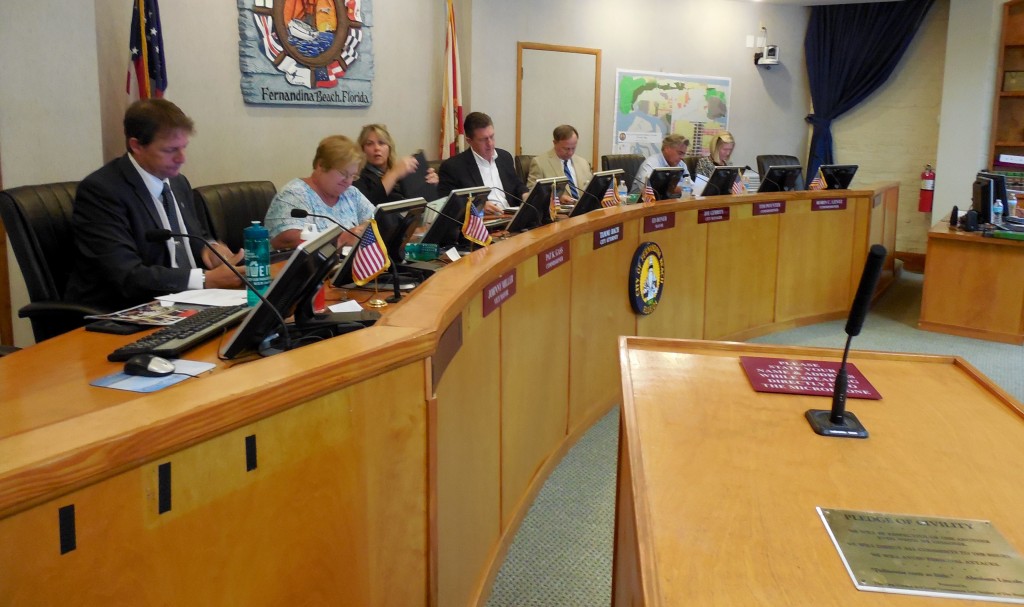 The FBCC devoted a half-hour of discussion to this matter, which Vice Mayor Miller had placed on the agenda. City Attorney Tammi Bach provided a draft ordinance prepared by Nassau Alcohol Crime and Drug Abatement Coalition (NACDAC). The main objectives of the Responsible Beverage Service (RBS) program are to develop and implement procedures in retail establishments to prevent alcohol sales to minors and intoxicated persons and to train managers, licensees and servers to use these policies effectively. NACDAC provides this training free of charge four times a year in conjunction with the Nassau County Sheriff’s Office and the Fernandina Beach Police Department.

Miller touted the benefits of this training, which he attends each year. He said that it helps people who serve alcohol to recognize underage would-be drinkers and to avoid serving more alcohol to intoxicated patrons. Miller said that he and Susan Woodford, NACDAC Executive Director, would like to see a larger participation in this training program, so they are recommending an ordinance to make such participation mandatory.

Woodford said that while nail technicians require 1500 hours of training to get licensed, alcohol servers require no training. 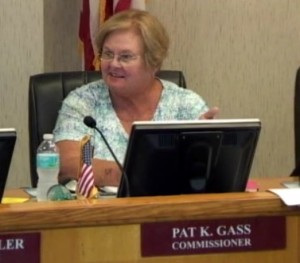 Gass asked how such an ordinance would be enforced. Woodford replied that code enforcement was one option, law enforcement another. She likened the process to licensing taxicabs. She said that she would like to see the training required every 2 or 3 years.

Gass said that she was not opposed to the educational aspect of the proposal. But she had issues with the mandatory requirement. She said that when her family owned a restaurant that served alcohol they could not attend the training because the time of the training would have required them to close to attend. Woodford said that they would try to work around schedules, even offering training on site. 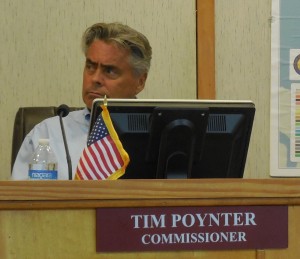 Commissioner Tim Poynter said that he has a restaurant and that he has attended this class. He said, “But I am really against more regulations being dumped on people. As a restaurant owner, it seems that we are getting more and more things that we have to do, more forms to fill out, all on our cost. Now we are doing the job of the state. Enough’s enough. I think it’s important to have a class, so that people can go to these things, but I am absolutely opposed to the mandatory-type deal, when we’ve got 20 servers at our place who occasionally have to pour a drink in the absence of a bartender. We are a food place that also serves alcohol, not a bar bar. Trying to get 20-30 people to go to this class because occasionally they serve a beer is not practical. I’m not in favor of it. Overregulation.”

Commissioner Robin Lentz agreed with Poynter about overregulation. She asked if a better approach might not be a public campaign or an on-line module that people could watch in keeping with their schedule. Woodford responded that there is an online module today but data show that it is not being viewed. 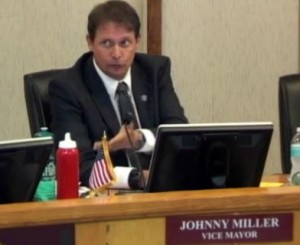 Miller said that the draft ordinance that has been submitted to Nassau County as well speaks to establishments open after midnight. He said that this ordinance is just as important as requiring food handling training. He suggested that not all servers would need to attend, but managers and senior staff could be tasked with the responsibility of training other employees. Miller said that he wanted to find a middle ground that would increase public safety without putting an undue burden on business owners.

Woodford added that business owners get a good break on insurance if their servers attend this class. “I’m not into regulation either,” she said, “but we have an alcohol problem in this community that no one wants to talk about. It’s not a youth problem. It’s an adult problem. I don’t know why we wouldn’t want to provide education. We’ve been providing it for free for 7 years. … We’re asking you to do your part.” 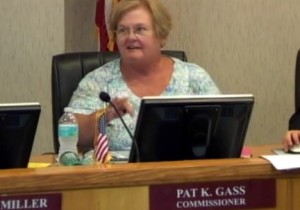 Gass said that if the city were going to adopt something, she’d like to see an incentive program adopted. “We don’t legislate, pass ordinances for them to go get what they are already supposed to have.” She said that the rules regarding serving alcohol to minors and intoxicated people are already in place. But she said that she would consider a program that encouraged participation. “I agree that there is a problem,” she said, “but I don’t think legislation is the answer to it.”

Miller said, “I would hate to see something happen because we didn’t do the right thing here, and it’s already happening. It’s a very big responsibility having that power to give somebody alcohol. You’re giving somebody a drug, that’s what alcohol is. … You can’t serve a hotdog without going through a food handler’s class, yet you can serve somebody a cocktail. There needs to be some sort of oversight here, and I think we can do it in a business-friendly way.”

Audience Member Clinch Kavanaugh said he agreed with both Poynter and Woodford. He said that there is an incentive for business owners because they get big savings on insurance by participating in the training. “All you’re doing is duplicative,” he said, “by adding another layer of bureaucracy and forcing people to do it. There is no reason to do this. It seems like every meeting [of the FBCC] there is more bureaucracy laid on small businesses. It sounds like this one is singling out those businesses that are open between 12-2 a.m. If any business owner has any sense at all, he is taking advantage of this program already. I don’t see the purpose of this.”

Audience member Philip Chapman asked the FBCC to support the measure, citing his past experience. As a result of training he received he said he had been able to get a lot of intoxicated people into cabs instead of behind the wheel of a car. “There’s nothing worse than having a kid die from alcohol poisoning,” he said.

An emotional Woodford returned to the podium to tell commissioners how difficult it is to sit across from parents to tell them that their child has died as a result of substance abuse or gone to jail. “All I’m asking for is education,” she said. “There are ordinances like this all over our state. We need key champions to stand up for this.”

Emergency Room physician Chip Ross also spoke to the alcohol problem. He said that in some states you cannot get a liquor license unless all your employees have completed alcohol training. He agreed that such training is very beneficial.

Miller said that while he is a city commissioner he serves alcohol for a living and he sees a need for this ordinance.

Gass said, “I just want you to know that I am that family member who lost a sister to a drunk driver who had been out all night partying. And still I hesitate to legislate it. I will do most anything feasible to encourage it, do whatever it takes, short of legislating it. I cannot see how we could even enforce it.” 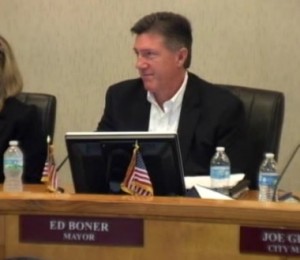 Boner asked for consensus from the commissioners on how to proceed. Miller said he read through the draft ordinance, and that it did not really apply to the city. “With all of us working together, we can come up with something,” he said. “There are times when you need control over dangerous objects, and I think this is one of those times.”

Miller said he didn’t supply the attachment; he just facilitated the conversation between the commission and someone who said the community has a problem. 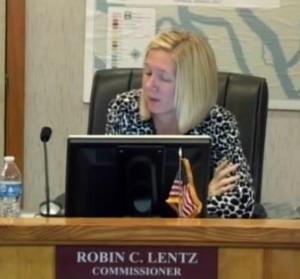 Lentz said that she understood the plight, and was willing to talk to restaurant people about the importance of the class. “I’m tired of all the layers,” she said. “I’m not a fan of forcing people into this. At some point personal responsibility and common sense enter into it.”

Boner cited the problems of people legitimately buying alcohol off premises for underage drinkers. He said he’d like to see something like the ordinance, but that he knew it was not the form that works.

Miller asked the commission, “Would you be opposed to my working on something that with my personal background I think would work for the community?”

Other commissioners said they were fine with that.

You have to be kidding…This is what happens when you elect a bartender to public office. Really? First blast the social media with pictures of fancy drinks, advertise specials, encourage people to drink, then want to set aside responsibility by having taxpayers pay for “instructions” on identifying the drunk and to young. I call BS on this hypocrite. If you really believe half of the slop your spewing out of your mouth, then stop selling alcohol after 11:00 pm..period. Our local government feels that people can’t control themselves on Sunday mornings, so what is the difference. Most alcohol related incidents happen after 11:00 pm so let it affect the pockets of the bartenders as well as the bar owners instead of the taxpayers.

Randy, We didn’t Elect a Bartender to City Commission,We Elected a retired career Navy Chief Petty Officer. who has distinguished himself, by his service to his Country. He just happens to be a Bartender in this step in time. That’s the Guy I Voted for, and will again. I can’t imagine why anybody would want to run for Office in this town, you couldn’t pay me enough to put up with what they all have to. Thank you all for your Service to this Community. Both who I agree with ,and those I don’t.

Why?? Let’s start repealing ordinances that don’t make sense, not add to them.

Its done elsewhere in Fla. It works.
Maybe a Good idea. Myself and another long time and noteworthy resident have taken such type classes.
The crack about electing a bartender to public office; speaks volumes about the mentality of the poster. Who else shall we exclude from holding public office. rhetorical
Not selling alcohol, that was a good idea. Alcohol maybe the root of all evil.

Thank you Dr. Antun for being willing to run for office and ...
wpDiscuz
4
0
Would love your thoughts, please comment.x
()
x
| Reply
Comment Author Info