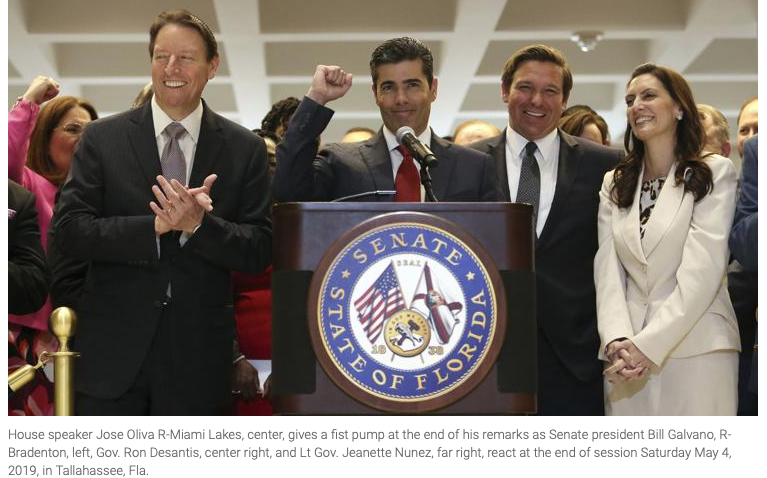 If lawmakers fully fund DeSantis’ budget request, Florida’s starting teacher salary would go from 46th to second-best in the nation, according to the National Education Association (NEA).

More than 300,000 Florida children are being taught by temporary substitutes as districts scramble to fill about 3,500 teaching vacancies statewide.

“With a strong economy and plenty of jobs available in other fields, unfortunately, too many college graduates are unwilling to enter the teaching profession,” DeSantis said. “My proposal to increase the minimum salary for teachers to $47,500 will help alleviate this shortage and elevate the teaching profession to the level of appreciation it deserves. I look forward to working with the Legislature to make this a reality.”

DeSantis, who repeated his message in Broward and Pinellas counties Monday, said the $603 million the teacher pay raises and starting salary boost would cost annually is “easily doable” despite revised projections of declining revenues from state economists.

The Revenue Estimating Conference’s updated General Revenue Fund & Financial Outlook Statement forecasts $867 million less in revenues the next two years than it did in March – $451.6 million less this year and $416.1 million less in FY21.

Bradley, the influential Senate Appropriations Committee chairman, said he would spearhead support for the governor’s initiative in the senior chamber.

“Teachers have made an incredibly positive impact on my life and the lives of my wife and kids. This session, it’s time to say thank you both in word and in deed,” Bradley said. “I’m proud to stand with Gov. Ron DeSantis as we fight for higher pay for Florida teachers.”

A proposed pay raise was not included in the state Department of Education’s (DOE) $22.3 billion FY21 budget request approved by the Florida Board of Education (BOE) in August.

Corcoran told the BOE in August that increasing teacher pay was a DeSantis 2020 priority and that the governor would deliver his own teacher salary proposal to lawmakers.

On Monday, DeSantis did just that, Corcoran said.

“Getting a great teacher in front of every child is the number one proven way to get great outcomes for students,” Corcoran said. “Today, Gov. Ron DeSantis is elevating Florida’s teachers like never before and is making a statement nationally that Florida is the Education State and he is the Education Governor.”

Proposing a new salary structure that takes the state from No. 26 to second in the nation in starting pay “sends a clear signal to Florida’s teachers and our entire education family that we are ready to celebrate our teachers and foster lifelong success for our students,” Corcoran said.

The $600 million for teacher pay raises and minimum salary increase in DeSantis’ budget request is about a quarter of the $2.4 billion that the state’s largest teacher’s union says is necessary to make Florida teacher salaries competitive with those elsewhere.

The Florida Education Association (FEA), which represents about 140,000 of the state’s 180,000 teachers, says $2.4 billion is necessary to finance a 10-percent across-the-board pay increase for every public school employee in Florida to improve school districts’ ability to recruit and retain teachers and staff.

The additional money would also allow school districts to invest in music, art and physical education programs, and to hire school counselors, psychologists and social workers, the association said.