Coronavirus devastating to businesses, employees in the tourism economy 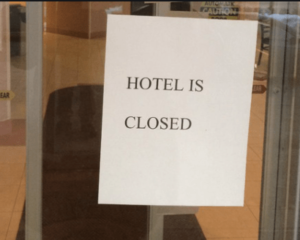 There is an old saying that when the gods choose to punish you, they grant your wish.

So for all the local residents who complain about the tourists taking over the island, worry no more.  Over the past few days, the occupancy rate at island visitor accommodations has hovered around 9 percent.

The Ritz is trying to remain open, although it has only 25-28 guest rooms occupied.  But the Amelia Omni Plantation will close this weekend and furlough a thousand employees.  Other establishments that have closed to date include the Elizabeth Pointe Lodge, the Sadler Road Hampton Inn and several B&Bs.

And we may be seeing only the beginning of the crisis.

Reaction to the coronavirus has been devastating to not only our hotels and resorts, but to the 1,800 employees who to date have lost their jobs as a result.  This does not even account for the numerous restaurant servers and bartenders who are hourly workers.

All of these unemployed workers are also consumers.  As their buying power is reduced, other local businesses will also feel the pain.

According to Gil Langley, President & CEO of the Amelia Island Convention & Visitors Bureau, during the first two quarters of this fiscal year, tourism brought in $43M in sales tax alone.  Projections for the second two quarters, assuming a partial recovery at least in July, are somewhat short of $16M.

Langley said that thanks to his reserves, he has been able to keep his staff employed, although he has had to cut contracts for internet tourist advertising and dismiss his British affiliate.  He has pulled $2M in advertising that was intended to promote island tourism through the remainder of the fiscal year.  Although some people have criticized what they see as ongoing advertising, Langley explained that due to scheduling, what people are seeing is advertising that was purchased last fall.

No one has a crystal ball for predicting when tourism will pick up again.  Langley said that for planning purposes, he is looking at the island being open for business once more in July.  But, he adds, “It took 3 years for us to recover from 9/11, and 5 years to recover from the recession.  This time it may take us even longer to recover.”

Langley said, “It is heartrending when you see 1,800 people lose their jobs.  I hope that when we come out of this, residents will embrace tourism with a more friendly hug.”

My heart goes out to the workers who have lost their jobs and to the small- and medium-sized businesses that are taking a hit. Both groups will have a difficult time recovering. My hope is that we see that our economy, all over the country, is constantly teetering on the brink of devastation, and it takes little to upset it, both for the individual and for the macroeconomy as well. I also hope that we see the value in paying people a living wage, that we mandate sick leave pay, that we make more robust our unemployment benefits, and that we transfer the massive tax breaks that our legislators give to the wealthiest of our citizens and corporations to the local business owners.

So what restaurants are open for take out? We live over the border in GA but would drive down to grab some food from a small local restaurant.

Here is a link for you to identify restaurants which have take out.
https://fernandinaobserver.com/city-news/centre-street-business-update/

I don’t know of anyone who’s actually from Fernandina who is happy with all the changes in Fernandina. It has become all about tourism and lots of people moving in from other places. Nothing is for the community that has lived there forever. There are buildings going up in every available spot, There is a business for everything you can imagine. More grocery stores and department stores than people can keep up with. A1A is a nightmare that’s not going to end for a long time. Fernandina is no longer a lovely little town. To hear my parents say they would move from Fernandina to somewhere less overcrowded is heartbreaking. So yes, some people are enjoying the break from the day to day chaos Fernandina has become.

“There is an old saying that when the gods choose to punish you, they grant your wish.”
Yes, be careful what you wish for, you just might get it. Does anyone remember talk of adding a toll to everyone crossing the Shave bridge? Well, now that tune has changed to a different song. Health and happiness to all of my fellow citizens!!

Agreed. While a brief break in traffic is refreshing, this is just so sad to see as a continued condition. Downtown is so quiet it’s eerie….. like a ghost town. I saw someone comment that everything should totally be shut down, even grocery stores…… that’s just ignorant.

I have complete sympathy for the workers, rental owners, etc. However, let’s be intelligent.

“Reaction to the coronavirus has been devastating”

The ONLY way to stop this is to reduce the number of people an already infected person, infects. That number MUST be LESS THAN ONE in order to stop this. Right now it’s 2-3 infected by every one infected person. So one becomes three becomes 9 becomes 27……get it??

It is in *our* power to drop the transmission rate by simply NOT COMING IN CONTACT WITH OTHERS. This will save exponentially more lives than any pharmaceutical agent.

Let me say it again: staying home and not coming in contact with others will save EXPONENTIALLY MORE LIVES than ANY DRUG on the planet.

IN OTHER WORDS: if you want to get people back to work, we need to stop the virus and to do THAT we need to drop the infection rate to LESS THAN ONE.

And, before you suggest that “symptom-free” people should be allowed to work, consider this: the virus has about a 14 day incubation. Meaning you may not START to show symptoms for 14 days. Now, you MIGHT show symptoms in 5 days. THAT is not the issue. The issue is, at what point do you have a high enough viral load to be shedding it?? And guess what? While the flu is MOST contagious 4-5 days AFTER symptoms start, this Covid 19 is MOST contagious BEFORE you start to show symptoms…..

So, let’s exercise some common sense mixed with simple logic and get this OVER and THEN people can go back to work.

The tall curbs on the east side of Front Street were r...
wpDiscuz
7
0
Would love your thoughts, please comment.x
()
x
| Reply
Comment Author Info