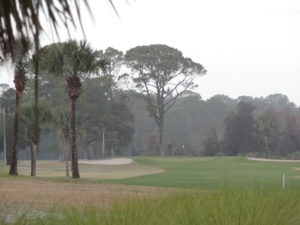 While there is no suggestion that the City of Fernandina Beach will abandon its municipal golf course, there seems to be both a lack of clarity and any agreement among Fernandina Beach City Commissioners (FBCC) as to the golf operation’s future.  At their January 5, 2021 Regular Meeting, the FBCC spent about an hour debating and discussing whether the golf course should be professionally managed, how capital improvements should be funded, and ultimately what level of play the course should offer to patrons.  Representatives of Indigo Golf Partners (IGP), the successor organization to Billy Casper Golf, participated in the discussions.

IGP is the current professional manager of the City’s course under a short term contract due to expire in February.  IGP’s longer term contract with the City expired in late 2020.  The short term extension was approved to give the City time to decide whether to enter another long term contract with IGP, return management of the operation in house, or seek competitive bids via RFP.

City concerns about the golf operation have centered on the course’s financial viability and the physical state of the greens.  The City is attempting to deal with returning the course operations to a financial break-even point or better with the satisfaction of debt by the end of 2021 and the introduction of TopTracer in February.

However, Mayor Commissioner Mike Lednovich, who worked as a golf reporter for many years prior to his move to Fernandina Beach, has expressed great dissatisfaction with the physical state of the greens.  At a previous meeting he said that he does not play the City course because it is in such poor condition.

On his own, Lednovich recently conducted a study of the golf course and its operations.  He called upon expertise of two golf course experts — Richard Deibert and Bobby Weed — to review and opine on the state of the course.  He presented the results of his study to City decision makers, IGP and local media last week.  [This report was neither commissioned nor approved by the FBCC or City Manager and therefore does not appear on the City’s website.  Those interested in obtaining a copy should contact Lednovich directly.]

The state of the course, especially the south nine, was severely critiqued by the experts.  Lednovich concluded:

“While a management contract has been in place for 10 +/- years, it is apparent the City and Management Company have a communication and coordination problem. The City is the owner and ultimately responsible for the property and its assets. The slow decline of the overall property has led to a reduction in play, loss of revenues and an unacceptable condition today. This is due to a lack of effort on both the City and Management Company together. The time has come to assemble a plan of action, starting with leadership at the City level. With the forthcoming growth in Nassau County and specifically Fernandina Beach, the City golf course should and can become a profit center and be competitive in the marketplace.”

Steve Murphy, the IGP course manager who had been widely praised for improvements made under his leadership, abruptly resigned in December.  Unnamed course grounds personnel contacted by Lednovich for his report acknowledged problems which they attributed to inadequate personnel and funding.

In a letter to the FBCC dated January 5, 2021, IGP acknowledged receipt of Lednovich’s report and responded:

“We believe the report lacks familiarity of the Golf Course Agronomic Plan, which was not requested prior to their visit or at any time since. Not reviewing the Agronomic Plan and subsequent maintenance practices makes it impossible to draw accurate conclusions as to the cause and effect of golf course conditions.”

“Some Capital has been allocated by the City over the last ten years to improve the golf course but not to the degree necessary to address several major areas of concern. As outlined in the Long Range Plans completed by IGP in 2013 and 2018, the USGA Report from 2013 and Capital Expenditure Recommendations submitted by IGP on an annual basis, Capital to address Greens, Tees, Bunkers, Cart Paths, tree removal/pruning, and renovating/re‐grassing Fairways and Roughs is necessary if the City desires to significantly elevate the current state of golf course conditions. The scopes of these projects will be determined based on available Capital and overall golf course condition goals that need to be clearly communicated by the City.”

Tony Cianci, IGP Senior VP, addressed the FBCC at the January 5, 2021 FBCC meeting.  He was accompanied by two other IGP representatives.  Cianci said that the experts that Lednovich had consulted had not spoken with them, nor had they played the course.

Lednovich cited the problems at the golf course as an example of the City’s past failures to put money into maintenance.  He reported that membership in the Men’s Golf Association has dropped from 300 in 2011 to 100 members today.  Cianci responded that the number of rounds played on the course has risen during that same time frame.

Commissioner Bradley Bean said that he regularly golfs at the City course and is happy with it as it is.  Bean said that for $25 dollars per round, it is an affordable golfing experience for locals, who do not expect it to be at the same level as a course that charges $200 per round.

Lednovich asked, “How can a golf course on a resort island lose money?”  He added, “I am personally embarrassed by the South Nine course.”

Following a short break, discussion continued.  Cianci cited the IGP and USGA reports which the City had commissioned previously that included recommendations for capital investment and improvements.  He indicated that each budget year the golf course is instructed to work within a specific dollar amount, which is not adequate to make the improvements cited in those reports.

Lednovich seemed unaware that the cited reports had been commissioned earlier by the City and asked why he hadn’t seen them.  Commissioner Chip Ross said that he had seen them and that they were in City files.

Cianci said, “We can do a plan for whatever level of course you want to pay for.”

Cianci went on to say that part of the turf problem is the number of trees on the course, adding that “hundreds of trees need to come down” in order to provide proper conditions for the grass to flourish.

Commissioners acknowledged that debt problems will end in 2021, and that the operation has a good chance of becoming financially sustainable.  However, that does not address the capital improvements needed to address physical problems with the course.  With all the capital needs throughout the City, there was no immediate answer as to how much could be committed to golf course improvements.

Commissioners also discussed possibly reconfiguring the course, taking the South Course out of play, and eliminating some bunkers.

Cianci stressed several times during the hour-long discussion that his company had enjoyed a good partnership with the City and would like to continue.

The questions raised during remain unanswered, but over the next 60 days the City will attempt to devise a way forward with or without IGP.

The major question aside from funding before the FBCC is what level of course does the City desire to maintain.  At least three of the Commissioners appeared satisfied to maintain it at a level typical of a municipal course as opposed to upgrading it to a level comparable to other local courses.