Closing time: Aaron Bean and the art of agreeable disagreement

He does have another career brewing. 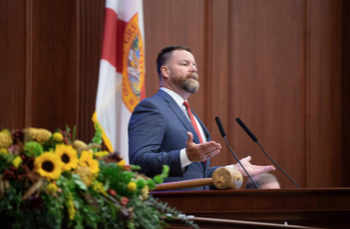 Florida legislators take pains to disagree agreeably, to preserve a certain decorum in Tallahassee regardless of currents that may roil their counterparts in Washington. Sen. Aaron Bean has developed a singular brand of across-the-aisle workmanship that extends well beyond the Capitol.

The Republican and Senate President Pro Tempore has represented parts of Nassau and Duval counties making up the 4th District since 2012, campaigning on elevating the region’s profile. He has cruised to victory in his Senate races but began his political career as an upstart, a young banker who won a seat on the Fernandina Beach City Commission in 1996. Council members subsequently voted him Mayor-Commissioner. At 29, he was the youngest to hold that office in the city’s history.

He ran for the state House of Representatives in 2000, a decided underdog in a five-county area that had not elected a Republican since the Civil War.

Bean and volunteers campaigned directly to residents, knocking on 40,000 doors. Many doubted he could defeat Democrat Bobby Hart, who was ahead in the polls.

His response: “Check back with me.”

Privately he held his breath until election night. Bean won with 58% of the vote.

“I had no business winning that House seat,” he said.

He has run a combined 16 years in both houses on that same spirit of unstinting optimism and elbow grease. He helped create an alternative health care marketplace in 2008, Health Choices, then proposed it as an alternative to Medicaid expansion under Obamacare. Bean was a Senator by then. He has lobbied prominently for fiscal conservatism, most recently by sponsoring an immigration enforcement bill that critics argued would threaten thousands of migrants, including some who have overstayed visas or might have asylum applications pending.

Bean countered that the bill passed in March relied on federal definitions of legal or illegal migrant status.

“I don’t know if it can be more simple,” he told the Tallahassee Democrat.

Other legislative interests range from school choice to legalizing medicinal marijuana to helping foster parents teach teenagers to drive without facing crippling insurance rate hikes. He has served on several committees and chaired the Senate Appropriations Committee. He is used to dueling with colleagues over ideas; harsh rhetoric from citizens in recent years is another matter.

“We are more polarized than ever,” Bean said, a development he attributes, in large measure, to social media. “I have an ‘Oh, wow’ folder (of comments) from the meanest people, the vast majority of whom don’t know me.”

A tweet, for example, one of several in which he boasted of his son Walker’s achievements on the Fernandina Beach High track and field team, prompted this reply: “If you die, it will teach him a lesson. I hope you die.”

Sen. Bean continues a hospital development position in private life, as well as what he calls his “side hustle,” auctioneering. A member of the National Auctioneers Association, he has called numerous auctions at benefits since 2010 to supplement his Senate salary of just under $30,000.

He donated his talents for a Jan. 25 “Red Dog, Blue Dog” fundraiser benefiting the Nassau Humane Society and other animal services organizations. Bidding pits a half-dozen Republican legislators against an equal number of Democrats. Organizers hoped to top the $9,600 raised in 2020. But this time, it was Bean standing on top of the bar, working a full-throated crowd from the left side of the room and back again.

Now that term limits have ended his Senate service, Bean will have more time for the golf course. He does have another career brewing, however.

“I want to be a motivational speaker,” he said.

More right-wing propaganda instead of news. Bean is at the forefront of keeping us in the cultural dark ages and ignoring the causes of climate change. He promotes band-aides to serious problems and makes it appear he is doing something, while only allowing things to get worse. As far as working across the aisle, it’s easy to appear conciliatory when you’re in the ruling party.

An interesting article by AP today on News4Jax:

The U.S. grew wealthier, better educated, less impoverished and less transient during the second half of the last decade, according to data released Thursday by the U.S. Census Bureau.

2016-2020? No way! Can’t happen with those right wing folks running the show! Wealth, poverty and education getting better? Gotta be fake news…

Climate has been changing for 4.5 billion years. The only danger we face is from climate change politics spurred on by the funding of our “green” NGOs by Russia and China to spread propaganda that so easily sways the likes of Mark Tomes. For anyone thinking we can replace fossil fuels with weather dependent, intermittent, and unreliable wind turbines and solar panels, please explain how you plan to mine and process the raw materials needed for them, transport of said materials to the manufacturing facility, power the manufacturing process, transport finished/semi-finished product, prepare the site, assemble, maintain, and ultimately decommission all the components necessary for grid scale solar and wind, including the new power lines that would be needed to connect remote and highly distributed sites that consume enormous amounts of land, without using fossil fuels? One reality is that wind and solar do not produce enough energy to power the machinery needed to reproduce themselves. Moreover, they have a far shorter life span that fossil fuel plants meaning they need to be replaced more frequently – wind turbines are supposed to last 20 years but frequently fail in as few as 15. Solar panels can last 25 or so years but efficacy degrades with each passing year. Fossil fuel plants take up far less land and last forty-50 years if not longer.

Anyone interested in learning more about the folly of getting to net zero can search on the following:

Weakest link to EV growth is the material supply chain
The net is, the war on fossil fuels is not only a serious and expensive threat to national security, but also anything but environmentally friendly. The level of ignorance coming from those supporting this war is not just frightening, it is dangerous.

Hey Mark – do you really believe there is a “Global Warming Crisis?” If so, use your smart phone to show us anywhere on the planet where it is currently 120F. I mean after 30 some years of climate catastrophe it has got to be burning up somewhere right?

The alarmist are zero for all time in their catastrophic predictions. That’s why the goal posts keep moving and why predictions are now so far into the future that no one making them will be alive to find out that they were wrong yet again. For actual data as opposed to scare mongering, see wattsupwiththat dot com/2021/04/25/wheres-the-emergency

Aaron…your life and actions have been truly motivational to many. I bet I still know where you are headed. Blessings to the whole family…

Will never vote for him

I understand……… Bean voted “Yea” on SB 7014. This gives hospitals another year of liability protection for covID related claims.

The world would be a better place if great big corporations were not released from liability. Consider Big Pharma. They are subsidized by the taxpayer. They make billions. They are also exempt from liability. Could it be that Bean’s big fat paycheck from a hospital and campaign contributions from Big Pharma, Big Banking, etc. influences how he votes? You’ve got to wonder.

It would be good of Mr. Bean to explain to us his logic on why Hospitals need more liability protection.

Aaron, I have always admired your stance on government issues and you are such a great family man. I wish you the best after your term is over and you take on more projects.