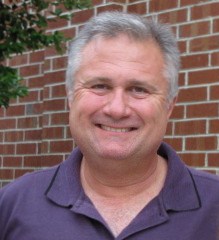 Sometimes, just after you have  accomplished a major goal or objective in your profession, you take a moment to sit back, look around, and think about whether or not you want to stay where you are or if you would prefer to move on or over or —  maybe even return to a more traditional form of your profession than where you are working at that moment.

And that’s exactly what Deputy Chief of Police Mark Foxworth did after he had spent more than 5 years  “re-shaping” the University of North Florida Police Department (UNFPD).  He went to UNFPD as Chief after the Department lost its accreditation.   He fixed the problems he went there to fix. The job was done.  And even though he was proud of the accomplishment and his staff of 28 sworn officers and 12 civilians, he felt as though he had  never really “melded” into the university atmosphere.   As he expressed it, “Lots of nice people but the institutional and specialized policing just wasn’t me.” 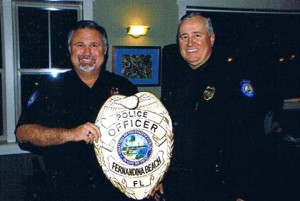 That was in 2008.  He had already met the then “new chief,” Jim Hurley, here in Fernandina Beach and  “liking the changes he was making, I reached out to him and he came to work here.”   Mark was back where he wanted to be — in a town where police work involves everyone from the youngest to the oldest,  along with businesses, vacationers, and city government.    And Fernandina also happens to be a town where thousands stop by for a day or more during one of our special events.  Over 100,000  attended the 2012 Shrimp Festival!

Mark can’t think of any job that is more diverse than that of being a police officer, where one experiences everything from the great joy of success to the utmost sadness of tragedy. It’s the only job he knows with such a wide diversity of emotions and experiences.   He has seen domestic violence counseled into a better place.    And he has seen striking women lose their beauty to substance abuse.  He also understands  that we’ve all seen homicides in the movies or on TV, but cautioned that the art form is nothing like “touching, seeing, feeling and experiencing”  homicide in real life.  You never forget the tragedy of it.    But homicide is part of the fabric of living and serving in a real community.  Just like saving a baby is.

Before serving as Chief of UNFPD,  and then coming to Fernandina Beach, Mark had a twenty year career with the Jacksonville Sheriff’s Office after graduating from the Southern Illinois University with a Bachelor of Science in Work Force Education and Development.  He retired from the Sheriff’s Office in 2000.  He left as commanding officer of the Homicide Unit, where he managed over thirty police detectives, supervisors and non-sworn personnel.    One of the career training programs he attended was the Command Officers Development Course, a 400 hour police leadership course taught at the University of Louisville.

Mark runs the day-to-day operations of our Police Department.   One of the things that that “running” involves is administering the Department’s 4.1 million dollar budget.   Chief  Hurley makes up the budget based on input from the various sections and departments.  And the Chief works with the City to obtain its approval.    But when it comes down to following the spending of the approved funds, Mark is the one who monitors it.    Everything from the payroll, to the mortgage, to the cost of repairing/replacing torn or worn out uniforms, to the paper products used, the outsourcing of video interpretation when necessary, outside testing.  The whole lot.    It is noted with pride that the Department has never overspent its budget since Jim Hurley became Chief.

The employees in the Records Section, Accreditation and Communications Section report to Mark.  As do the Division Captains and the  volunteer Auxilliary Police.

The way Mark expresses his relationship with the heads of the Patrol and Investigative Divisions (Captains Bishop and Norman) is that he ensures they have the tools and resources necessary for them and their employees to do their jobs.  He and the Captains work as a team — and the Captains keep him informed concerning the daily operations of their departments  and any major crime problems in town.

To remind us all that humor can be found in all situations, Mark told of the time when he, as a young officer, was working a homicide around midnight, and a very drunk man keep wandering into the marked off crime scene and interfering with the work of the officers, so Mark finally escorted the guy  to the back seat of his friend’s patrol car.  And promptly forgot about him.  The next morning, about 7 a.m., when the friend was driving home,  imagine his surprise (wonder he didn’t drive right off the road!) when this terribly hung-over disheveled person peered up over the back seat, moaning his way awake.

Though Mark isn’t as visible as Chief Hurley  – the chief is the public face of the Department – Mark tries to get out and see people every day.  And go by City Hall.  He also represents the Police Department by serving on, or as an advisor to, several committees and councils in the city. If you haven’t yet met the Deputy Chief personally, perhaps you saw him in the  “Foul Ball”  episode on the Bio Channel’s Killer Kids program in December.   It’s a story from Mark’s former life in Homicide — where one child killed another.  (We are checking to find out if/when this episode will be rerun.)

I told the Deputy Chief how I — in a recent Police Blotter Blast — had  quoted  a citizen angrily telling a police officer, “You are a piece of work, and worthless as the day is long.”  Mark gave an understanding nod as he explained he is always telling young officers not to take such words to heart because the speaker isn’t talking to the officers’ “hearts;” he/she is talking to  their badges.

Did I happen to mention that Mark has six grandchildren and three more on the way?  The smile on his face pretty much  tells it all when it comes to family and his wife of thirty years, Mary.

Editor’s Note: After a career in adult education, where writing, course design and development were her “beat”, Deborah is now enjoying the world of freelancing. And volunteering. We thank Deborah  for her contributions.