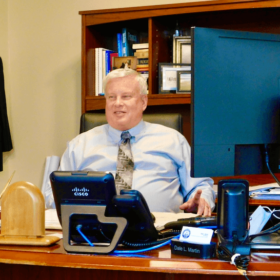 In 1998, Tom Brokaw, then the sole anchor of “NBC Nightly News,” authored a book titled “The Greatest Generation.” The book’s title was derived from his experiences while visiting Normandy to commemorate the 40th (1984) and 50th (1994) anniversaries of the World War II D-Day landings. During those trips, he encountered many World War II veterans and offered this insight in the foreword to his book.

“I am in awe of them, and I feel privileged to have been a witness to their lives and their sacrifices. There were so many other people whose stories could have been in this book, who embodied the standards of greatness in the everyday that the people in this book represent, and that give this generation its special quality and distinction. As I came to know many of them, and their stories, I became more convinced of my judgment on that day marking the 50th anniversary of D-Day. This is the greatest generation any society has produced.”

Simply due to the passage of time, we are losing the members of the Greatest Generation. The members of this generation came of age during the Great Depression (1929-1939) then mobilized and manufactured to fight the greatest war (World War II) then returned to build families and a nation suddenly thrust into the role of a world leader. Brokaw insisted that this generation did what they did because “it was the right thing to do.”

Last week, our community lost a great member of the Greatest Generation. Mr. James Thomas, age 101, United States Marine Corps veteran of both World War II and the Korean War, passed away on Jan. 7. I likely suspect that beyond family and community friends, his passing will be unnoticed – it is more “newsworthy” to know the latest TikTok trends and pop culture relationships than it is to note the passing of a true American hero. What a national dishonor.

Likely due to space constraints, his obituary summarizes his duty and service to the country succinctly: “Mr. Thomas joined the U.S. Marine Corps when he was 17 years old before the beginning of World War II. He served in China [as] part of a regiment assigned to protect American interests and citizens from the Japanese prior to World War II. He served during World War II and the Korean Conflict. Mr. Thomas was honorably discharged at the rank of Tech Sergeant with over 14 years’ service.”

“Served during World War II.” Five simple words that overwhelmingly understate what he did (an interesting trait among many of the Greatest Generation – humility).

Although the United States had recently blunted Japanese advances at the Battle of the Coral Sea and the Battle of Midway, a hastily conceived invasion of Guadalcanal was the first offensive effort against the Japanese. Reconnaissance had indicated that the Japanese were building an airfield on Guadalcanal: if completed, the airfield would interdict the supply line to Australia. It was determined by U.S. commanders to seize the island and airfield. Most people during the war had never heard of it and I would contend that most people today couldn’t find it on a map.

The 1st Marine Division, including Mr. Thomas, led the invasion of Guadalcanal. As an avid reader of military history, in my collection of books is “The Reader’s Digest Illustrated Story of World War II.” The subtitle of the chapter about Guadalcanal is numbing: The Island of Death. Mr. Thomas stepped onto the Island of Death on Aug. 7, 1942.

Guadalcanal is about 2,000 square miles, roughly the size of Delaware (or in more possibly understandable terms as offered by Nassau County Tax Collector Mr. John Drew, the combined size of Nassau, Baker, and Duval counties). In other words, it was small enough that no “rear” areas existed for rest and recovery. The Marines were encircled by the sea, the jungle, mosquitos, and the Japanese, all of which took an inevitable toll.

The Marines landed relatively easily and unopposed, and captured the airfield within days. For six months, the longest island campaign of the entire war in the Pacific Theater, the Marines and the Japanese dueled nightly with bayonets and bullets. At this early stage of the war, the Japanese were a formidable force, bombing the island from the skies and shelling the island from the seas. Additional Japanese troops were shuttled to the island under the cover of darkness. Meager supplies, thick jungle, and malaria (contracted at least seven times officially by Mr. Thomas) threatened the success of the American effort. Dozens of naval ships on both sides were sunk during nightly forays. The area became known as Ironbottom Sound.

A three-day naval battle, what became known as the Naval Battle of Guadalcanal, crippled the Japanese navy and closed the decisive phase of the Guadalcanal campaign. On Feb. 7, 1943, the last Japanese troops were removed. The 1st Marine Division, including Mr. Thomas, was rendered ineffective, but was honored with a Presidential Unit Citation for outstanding courage, determination, and gallantry. For four months, the Marines had fought in one of the foulest climates, been incessantly bombed, shelled, and attacked. Marine losses were over 1,200 killed, died of wounds, or missing. Wounded soldiers exceeded 2,600. If temporary losses due to disease and sickness were considered, the losses would have been near total.

The blood of what would be declared as the Greatest Generation would be further shed on numerous Pacific islands, across African deserts, in European cities and forests, and in the skies and seas around the world. The role of those that remained “home” to support the war effort cannot be overestimated, either.

The Greatest Generation will soon be gone. It is imperative that their sacrifice and service, not only to their country during war but to their communities in the subsequent peace, never be forgotten. I unequivocally agree with Mr. Brokaw’s designation.

Godspeed, blessings, and peace to Mr. James Thomas and his family.

Thank you for honoring Mr Thomas and all members of the greatest generation.

Thank you for giving us this additional background on Mr. Thomas’ selfless service to his country.

Outstanding article. Completely agree… what happened to that courage in our world today? We have become a bunch of self centered, whiny, easily offended babies! Our politicians and news commentators live for those “gotcha” moments. We fight each other instead of defending each other. Our military though is still one of the greatest in the world! My husband Patrick was a Navy Commander. He died as a result of complications of Parkinson’s due to his exposure to Agent Orange during his service in Vietnam.
The ultimate service to country!
Thank you Mr. Martin for putting the spotlight on our heroes!

Great piece, I wish, as Americans, we still held the views of that generation. . . in doing “the right thing”. Did not know Mr. Thomas, but we will certainly miss the moral compass of his generation.

One of the great values of media is to inform with data and ...
wpDiscuz
5
0
Would love your thoughts, please comment.x
()
x
| Reply
Comment Author Info