The Fernandina Beach City Commission (FBCC) held its second FY2019-20 Budget Workshop on August 13, 2019 before a scattering of audience members.  No adjustment to tentative millage rates was proposed or discussed.  The FBCC asked City Manager Dale Martin to incorporate the following changes in the proposed budget:

Three city residents spoke and raised questions on the need for vehicle replacements, improved contract monitoring, the value of and need for a waterfront park.  They also expressed opposition to the 0.5 millage increase dedicated to conservation.

City Manager Dale Martin began the workshop by explaining the tax bills that residents receive, using his own property as an example.  Martin said that of all the various taxes listed on the bill, only two are levied by the city.  All other components of the annual tax bill are levied by other taxing authorities.  He explained the difference between market value and assessed value, as determined by the Nassau County Property Appraiser and said that homesteaded properties by law may not have their assessed value raised by more than 3 percent any given year.  This year, because the state-calculated Consumer Price Index is lower, homesteaded properties are limited to a 1.9 percent rise in assessed value.

Martin presented a chart that showed $970 as the mean tax assessed for Fernandina Beach residential properties in 2018. Of 8303 residential tax bills sent for 2018, the lowest tax paid was $9.00; the highest:  $216,492.  Martin said that regardless of what seems to be inequity in the tax bills, all city residents receive the same city services. 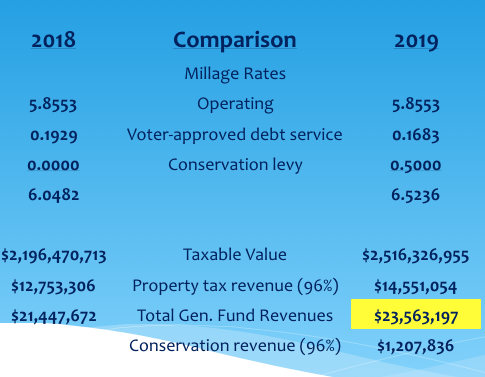 Factoring in the cost of returning beach expenses to the General Fund and transferring Buccaneer Field fencing and Egans Creek Playground curbing to the Capital Fund left the tentative budget $15,063 over the General Fund revenue estimate presented in the previous workshop.  Note that money in excess of the mandated 20 percent reserves remains available for projects and personnel, as well as close to $2M in the Building Fund’s restricted reserve.

City Manager Martin also discussed a potential revenue enhancement for the city golf course that could result in a positive cash flow for the operation beginning in 2025.  The popularity of the sport of golf has been declining nationwide due to several factors including:  younger retirees seek more active sports, the length of time required to play a round of golf.

But there has been a dramatic increase in “off course golfing” represented by activities such as Topgolf and Toptracer.  Island golfers wishing to engage in these activities to improve their golf swing or as part of a social experience currently need to travel to St. Johns or Duval County.

Commissioner Mike Lednovich, who worked as a golf reporter prior to his move to Fernandina Beach, was an enthusiastic supporter of this idea.  He said that the golf business has changed, with courses closing around the country due to lagging business.  He said introducing Toptracer at the city course is a “fantastic opportunity” for golfers, families and social groups.  He said that due to the technology, golfers can play courses like Pebble Beach in 45 minutes.

Commissioner Chip Ross and Mayor John Miller expressed interest in the possibility of adding Toptracer to the city golf course’s amenities.  Initial preparation and purchase of technology would be approximately $700K, with estimated annual income of $200K.  The city would begin with 20 bays, which could be expanded if traffic warrants it.  Martin stressed that the city’s operation would not be multilevel or intrusive to the landscape.

Fernandina Golf Course manager Steve Murphy believes that there is a ripe market locally for the successful implementation of Toptracer at the municipal course.  He is currently working on costs and projections for introducing this activity, which would be located at the site of the current driving range.  Should the FBCC approve this move, the range could be operational by March 2020.  He is also pursuing exclusivity for the island.

Commissioners discussed the city’s capital needs, which over the next 5 years are estimated to cost $34M, not including costs for a waterfront park which have yet to be determined.  Vice Mayor Kreger encouraged using impact fee revenues to fund these needs, where appropriate.  Commissioners will grapple with all the city’s capital needs for the next five years at the 2020 Visioning Session which will take place in January.

Vice Mayor Len Kreger expressed concern that money requested to help pay for beach cleanup ($271K) which the TDC has agreed to pay will not be authorized by the Board of Nassau County Commissioners, “because they are mad at us.”

Commissioner Phil Chapman reminded commissioners and the audience that the North Florida Land Trust (NFLT) has not promised the city $4M to purchase conservation lands.  Rather they have agreed to launch a capital campaign in hopes of raising that amount for that purpose.  Chapman said that when NFLT representative Marc Hutson addressed the FBCC on this issue, he said that potential donors want to know that the city “has skin in the game.”  By enacting a one-time 0.5 mill levy anticipated to raise $1.2M for that purpose, the city has taken an initial step.

However, Chapman recalled promises and commitments made by audience members in previous city meetings to support the city’s conservation efforts with contributions to the Conservation Fund.  To date, the city has not seen evidence of that support.  Chapman encouraged island residents who have been vocal supporters of tree conservation within the city to contribute the equivalent of 0.5 mills to the city’s Conservation Fund.

Commissioners also discussed a request received in June for funding to support a Girls’ Fast Pitch Softball Field at the MLK Center.  They agreed that it was a good cause, but questioned its priority for the upcoming budget year.  Parks and Recreation Director Nan Voit said that the Parks and Recreation Committee had recommended that the project be included in the FY2020-21 Budget.  Commissioners agreed to continue discussion of this request at a future meeting.