Issues surrounding the Port of Fernandina continue to concern city and island residents. During public comment at the November 17, 2015 Fernandina Beach City Commission (FBCC) Regular Meeting, Dr. Chip Ross and Mr. Medardo Monzon addressed commissioners on the apparent lack of an evacuation plan known to the public in the event of an emergency resulting from a fire, explosion or spill of hazardous material. Monzon underlined the potential for disaster from storing chemicals with a film showing a major explosion at a Chinese port. 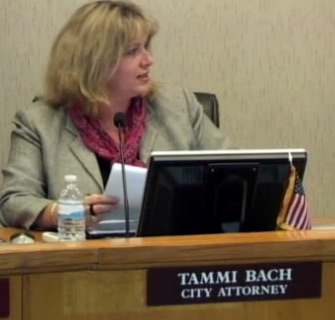 At the end of the meeting, City Attorney Tammi Bach informed commissioners that Ocean Highway and Port Authority (OHPA) attorney Clyde Davis had informed her that in light of a recent court case, OHPA was withholding its annual $50K payment to the city. These payments, known as “pilot payments,” have been declared unconstitutional as a result of a court ruling in the Tampa region. Bach said that the issue is in “legal limbo” right now, since the Supreme Court is considering reviewing the case. Bach said that such arrangements, which involve a non-profit or another entity paying a jurisdiction a fee in lieu of paying property taxes, are widely used throughout the state.

Depending on the final outcome of the court proceedings, she quoted Davis as saying that OHPA might seek return of previous payments as well. With the FBCC’s concurrence, she indicated she would draft a response indicating that the city understood OHPA’s position and would await legal clarification. “We want to do what’s legal,” she said, indicating that the city would work with OHPA to resolve the issue.

At the previous FBCC meeting, Commissioner Pat Gass advised that further research was needed in order to determine whether the Port of Fernandina lacked an emergency evacuation plan. Chip Ross, who had raised the initial concern, reported back on his further investigations.

Ross indicated that he had contacted a representative of the Northeast Florida Emergency Planning Committee, who said that it was the responsibility of the port to have contingency plans for hazardous material spills, fire and explosion at the port. He also contacted Kinder Morgan, the port operator. He reported that while he received a lengthy response, no plans were attached to the letter. “It appears,” he said, “that neither the city, the OHPA, the Fire Department or anyone else has those plans.” He added that he trusts Kinder Morgan has plans, but he would like to verify the details. He has filed a public records request in hopes of obtaining what he has not been able to locate to date.

Ross asked that the city politely file a similar request with the port to allay citizen concerns and make sure that there are contingency plans to protect the public from any spills, fires or explosions resulting from handling or storage of hazardous materials.

Monzon gave a slide/video presentation on the unintended consequences of not acting to limit the flow of hazardous materials through the Port of Fernandina. He used as an example the Chinese port of Tianjin in August 2015, where an explosion destroyed an area within a radius of 4 miles. The port was located in a densely settled residential area. The explosion killed 173 people, injured another 700, and displaced 6,000 residents. It also resulted in widespread air, water and land pollution. He said that prior to the blast, the community was unaware of the latent dangers of the port’s activities.

Five chemicals were stored in solid form in a small warehouse. The chemicals are used in fertilizers, production of PVC plastics and mining. When a warehouse fire of unknown origin broke our, firefighters sprayed it with water, which caused the calcium carbide to produce acetylene that ignited. The resulting heat caused the nitrates to explode and produce toxic cyanide gas.

Monzon compared and contrasted actions and positions of the Tianjin officials with those of Ocean Highway and Port Authority (OHPA) officials.

“Hazardous chemicals don’t scare me,” Monzon said. “I’ve worked in the industry for 20 years. … What scares me are statements such as the ones issued by the OHPA.” Monzon listed four of these statements on a slide: “We are unable to reject lawful cargo;” “We don’t know what is shipped through the port;” “It’s none of our business;” and “It’s up to Kinder Morgan [the port operator].”

He went on to offer his opinion that events such as Tianjin “are likely” to occur in Fernandina Beach. “We have misguided attitudes, in my opinion, among Port Authority and Kinder Morgan, with respect to the location of the port to the downtown area.” He cited concerns over what he deemed to be understaffing of the Fire Department, absence of a local HAZMAT Team, lack of emergency plans, Kinder Morgan’s “horrendous safety record as documented publicly.” He concluded by saying, “This creates a perfect storm for a similar [to Tianjin] catastrophic event at the Port of Fernandina.” He showed a 45-second video of the Tianjin explosions filmed from about a mile away to underscore his concerns.

Monzon urged commissioners to support an upcoming resolution to limit the flow of hazardous chemicals through the port to avoid unintended consequences similar to the ones that befell Tianjin.

The Ocean Highway and Port Authority will hold its November meeting at 6:00 p.m. on November 18, 2015 at the James Page Governmental Center in Yulee, FL.