Yesterday’s threatening afternoon storm did not dissuade approximately 75 people from attending the dedication of a historical marker placed at the site of the Church of the Good Shepherd.  Among those who gathered were 15 – 20 former members. The Reverend Stephen Mazingo of St Peter’s Episcopal Church said the placement of a historical marker was long overdue. 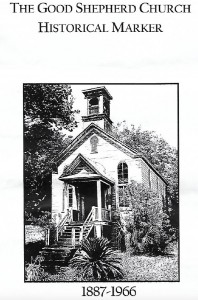 Shortly after David Yulee platted the new town of Fernandina in 1858,  a wooden structure was erected to serve as a sanctuary for the newly formed St Peter’s Episcopal Church.   In 1887, as Fernandina grew more prosperous, Episcopalians constructed a more elaborate house of worship.

According to Suzanne Davis Hardee’s “Churches of the Golden Age of Amelia Island,” church records in 1887 said: “Plans were made to prepare the old church building for the use of the colored communicants of the parish.  Under the name of the Church of the Good Shepherd, it was moved to its present location on the Northeast end of our block.”

In May 1887, the original wood frame building of St. Peter’s Episcopal Church in Fernandina was given to the black congregation and called Good Shepherd Episcopal Church. The structure was moved to face east on Ninth Street. The rectors of St Peter’s continued to serve the segregate congregations on Sunday morning. Father Neil Gray, who served both parishes in the 1950’s, called the walk between the two churches his “via dolorosa,” or “way of suffering.” In the 1950’s, Good Shepherd included 59 confirmed adult members and 24 children. In 1964, the Good Shepherd building was destroyed by Hurricane Dora and a new building replaced it two years later. When Hamilton West, the Episcopal Bishop of Florida, declined to consecrate the new church, the black and white congregations were integrated. The new building, although never used as a church, became a youth center and stands on the northwest corner of the campus. The original church bell, which was cast from metal recovered from a pre-Civil War Florida railroad engine, was moved to Camp Weed in Live Oak, the camp of the Diocese of Florida.

A Florida Heritage Site
Sponsored by St Peter’s Parish and the Florida Department of State.

Susan, thanks for writing this article. Although the history of Good Shepherd has long been known to the members of St. Peter’s and frequently cited in tours of the church grounds, the wider broadcast of this history is beneficial.

Eloise Harris was instrumental in getting the marker placed. She, along with the other ladies, prepared and served an absolutely wonderful meal enjoyed by everyone. Carolyn Phanstiel actually composed the wording for the marker. We are all so proud that an historical piece of St. Peter’s history has been preserved.

The tall curbs on the east side of Front Street were r...
wpDiscuz
2
0
Would love your thoughts, please comment.x
()
x
| Reply
Comment Author Info