Business is improving at the Port of Fernandina following a downturn in shipping activity during 2013 and 2014. According to Ocean Highway & Port Authority (OHPA) Attorney Clyde W. Davis, should the trend continue the port could “easily exceed the numbers of the previous three years.” 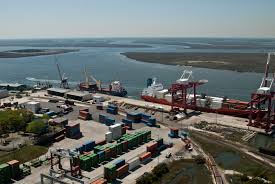 Reports from the July 13 meeting of the Ocean Highway & Port Authority, show the following:

The strongest month of the year was in June with 34,230 tons of cargo moving through the port.  “The increased tonnage is driven by increased shipment of local products in the form of Kraft liner-board and lumber,” said Davis.

The Port of Fernandina has seen a decrease in container tonnage and  an increase in “break-bulk” shipping (separate pieces rather than containers).

Davis said, “Although we have not yet recovered from where we were when steel shipments were booming, our “numbers” show consistent, steady improvement. If we stay on track, we will easily exceed the numbers of the previous three years.”