As described by the AARP (American Association of Retired Persons), an Age Friendly Community “or livable communities have walkable streets, housing and transportation options, access to key services and opportunities for residents to participate in community activities. The network encourages states, cities, towns and counties to prepare for the rapid aging of the U.S. population by paying increased attention to the environmental, economic and social factors that influence the health and well-being of older adults.”

Dr. Eugenia Ngo-Seidel and Mary Von Mohr with the Nassau County Health Department made a presentation before the Board of County Commissioners on August 21st with the ultimate goal being that Nassau County could become one of those communities that encourages aging-in-place. Ms. Seidel pointed out that the majority of the Nassau County population is in fact, over 50.

According to the AARP, there are currently four states, (Colorado, New York, Massachusetts and Florida,) one territory (the Virgin Islands) and 394 communities that have been accepted into membership. Membership in the organization does not constitute an endorsement of the AARP but instead reflects the conscious support and actions of a community and its “elected leadership [having made a] commitment to actively work toward making their town, city, county or state a great place to live for people of all ages.”

As Ms. Von Mohr explained, there are eight domains of livability which impact the well-being of older adults. As articulated by AARP, those domains are: 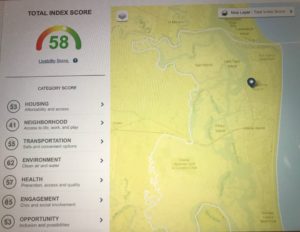 The process to become a member of the Age Friendly Communities requires an application be submitted along with a letter of support. The membership process requires no financial commitment. The process, as explained by Ms. Von Mohr, typically takes about five years but she indicated Nassau County is well into year two having already developed a survey to put out to older citizens which will serve as a baseline assessment. The Commissioners voted unanimously to approve that the Department of Health move forward with its application.