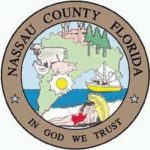 With the end of qualifying for a seat on the Board of County Commissioners, we now have a final slate of candidates for District 2 and District 4 in Nassau County.

In District 4, the August 28 Primary, limited to registered Republican voters, will decide the race between incumbent George Spicer and challenger Thomas Ford.  The winner will face write in candidate William (Bill) Kruse on election day November 6.

In the City of Fernandina Beach, individuals interested in running for office to gain a seat on the Fernandina Beach City Commission have until Friday, July 13, 2018 – 5:00 PM to qualify.