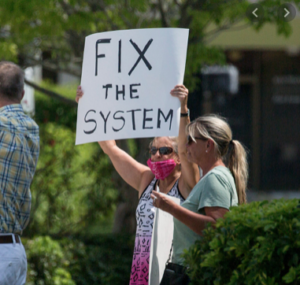 (The Center Square) – As former governor and current U.S. Sen Rick Scott and Gov. Ron DeSantis squabble over who is responsible for Florida’s unemployment system fiasco, the company at the center of contention has emerged as a $135 million winner.

Deloitte Consulting beat out four other companies’ bids, including IBM and Accenture, to win a seven-year contract to modernize Florida’s Medicaid database for the Florida Agency for Health Care Administration (AHCA).

That has many angry, with Democrats exploiting the revelation as an example of a “good-old-boy” network built over two decades of Republican domination.

Deloitte won the contract despite being investigated by the Florida inspector general, sued by the state and fined $8 million for its performance in building the $77 million unemployment website that collapsed in March and remains dogged by glitches.

It has cost the state more than $100 million to upgrade the system, which DeSantis called the “the equivalent of throwing a jalopy into the Daytona 500,” by purchasing 72 servers, reassigning 2,000 state workers and contracting thousands of private call center employees to assist.

Deloitte, in response to the state’s lawsuit, maintains it has had “no connection” to the system in more than five years and is not responsible for failures since March.

DeSantis has not commented, but spokesman Fred Piccolo told Politico he could not legally nix the deal after it had been deliberated through the state’s competitive procurement process.

Democrats said if DeSantis cannot sever the contract, AHCA can and should do so.

“In what world do you reward a company that sold a product described by the governor himself as a ‘jalopy’ designed to fail with even more taxpayer dollars? It’s misguided at best, and callous disregard for the people of Florida at its worst,” Senate Minority Leader Audrey Gibson. D-Jacksonville, said.

“Ultimately,” Sen. Janet Cruz, D-Tampa, said, “the state of Florida should not even consider paying Deloitte one more red cent until every Floridian has received the outstanding unemployment benefits they are owed.”

DeSantis requested an investigation in May into why Scott spent $77 million for the site that collapsed “right off the bat” when Florida’s unemployment rate nearly tripled to 12.9 percent, leaving hundreds of thousands of jobless Floridians waiting weeks for first checks.

DeSantis wanted to know why the 2011 contract to build the unemployment website for $40 million cost $77 million to launch in 2013, even after some lawmakers and officials called for Scott to sever the contract.

As has been widely noted, among Deloitte lobbyists at the time was Ballard Partner’s Brian Ballard, the co-chairman of Scott’s inaugural finance committee.

As cited by several Democrats, however, among Deloitte’s lobbyists now is Jennifer Ungru, who served on DeSantis’ election recount team, was a Scott deputy chief of staff and was an AHCA chief of staff, and Christopher Moya, who was on DeSantis’ Inaugural Committee.

Floridians “have a right to know just how transparent the award of this contract to Deloitte was, whether political ties greased the wheels for the winning bid, and will their need for health care be sacrificed because of it,” Gibson said. “We cannot risk the cost of failure again.”

“Why would you have paid the 77?” he asked. “It’s one thing if it’s on the cheap (but) that’s an enormous amount of money for a system clearly not built for the long haul.”