He’s never had a windmill dunk, scored a college or NFL touchdown, or turned the double play. He had no formal coaching, access to a training manual, and admits that he’s never been great at any single sport. But, 76-year-old Bruce Buchanan is likely Amelia Island’s most accomplished athlete.

His feats are not what drive mainstream sports media, make national headlines, or create appearances on the Tonight Show. However, Buchanan’s two decades of athletic success are glowingly documented.

Officially, Buchanan is an Ironman. And, Bill Gates has some money, Adele hits the high notes, and Pinocchio features a unique profile. Simply referring to Buchanan as an Ironman seems understated since one becomes an Ironman by completing a single event consisting of a 2 ¼ mile swim, 112-mile bike, followed by 26.2-mile run. 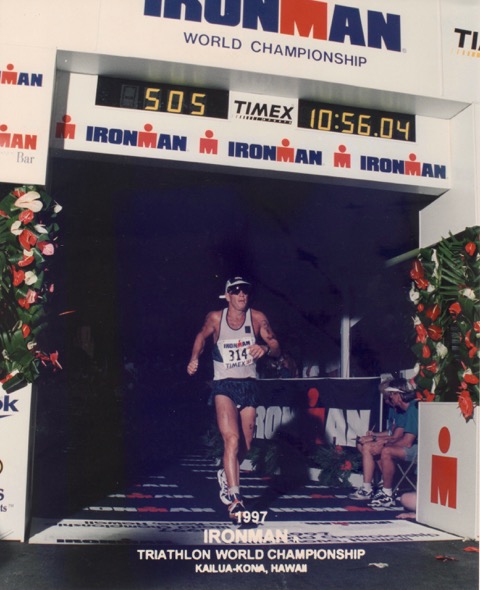 Consider that between 1983 and 2006, Buchanan completed 15 World Championship Kona, Hawaii Ironman competitions, finishing in the top three in age in all but three. He has won his age group seven times, and was the first person over 50 years old to complete the event in under 10 hours, which he did in 1992 at age 52. The average athlete finishes an Ironman in about 12 hours. And, besides the intensity of hours and hours of competition, the Kona championship has the added pleasures of 80-plus degree heat, crosswinds and hills through the island’s lava fields.

“I’ve always been a good athlete, but not great at any one sport,” said the soft-spoken Buchanan. “It just so happened when you put the three sports of swimming, biking and running together I was able to be better than good.”

Actually, he was much better than good.

“I always had the feeling that I was going to win. I wasn’t cocky to anyone, but I was confident I was going to win my age division. Triathlons are so mental. I’m not the smartest guy around, but I am mentally tough, and if it wasn’t for my back injuries, I would still be competing,” Buchanan, an Amelia Island resident since 2000, said. This year’s Kona Ironman will take place on October 8.

A four-year collegiate swimmer, a young Buchanan never imagined he would be a triathlete, but injuries, combined with coercing from friends spurred the transformation.

“When I graduated from college (1962) I stopped swimming competitively completely,” he said, instead feeding his competitive spirit with tennis, golf and handball; obviously, not exactly precursors to triathlon success.

But, when the years of competition took its toll with some back injuries, Buchanan started running on the advice from a doctor who said it would help alleviate some of his back pain.

“I really didn’t like running at all,” he said. “I’d only run about two miles five days a week, and I really didn’t enjoy that. When I look back on it, it really wasn’t much.” But, a handball friend encouraged Buchanan to train and run the 1976 Atlanta’s Peachtree 10K Road Race. So, begrudgingly he pushed his weekly mileage to prepare for the event. “I can still remember how sore I was when I started running four instead of two miles, then six instead of four. I really didn’t like it, but I wanted to do well in the Peachtree,” he said.

And, he did well… finishing the 10K in 39:36, which was in the top 10% of all finishers. From there the ultra-competitive Buchanan trained and competed in a marathon, finishing his first 26.2-miler in 3 hours and 15 minutes. Now, with his weekly mileage around 80 miles per week, he continued to compete in marathons, lowering his times to a personal best of 2:42. In perspective, less than 2% of marathoners ever break three hours.

So, by 1982 at age 42, Buchanan had two-thirds of a triathlon in his arsenal with swimming and running, but he did not even own a bicycle.

“I had a group of guys that I used to run 20 miles with every Sunday. A few of them started bringing bikes to use after running. I had no desire to add biking – – the running was enough for me,” he said. “But, one day one of the guys brought an extra bike and insisted that I ride with them, so I said okay.”

Oprah would have called it an “Aha” moment.

The next thing you know, Buchanan had trained on his home streets of Atlanta and signed-up for the Savannah Half-Ironman (1.2 mile swim, 56-mile bike, 13.1 mile run) and inexplicably finished fourth overall. “I finished and felt like I found my sport. When you put all three together (swim, bike, run), I could do them all pretty well,” he said. “You could say that I was hooked.”

He began training for the full Ironman.

“I had to train myself, because back in the early 80’s there were no training manuals or coaches around to help you train for Ironman. And, the biking was especially difficult because there were no bike lanes at that time, so you had cars crowding you off the road, yelling stuff at you and even throwing things. I think they felt like we were invading their space,” he said.

So, in 1983, Buchanan went to Kona for his first Ironman, finishing third in the 40-44 men’s age division. However, the experience was not exactly a sunset luau.

“I finished and felt like ‘that was the stupidest thing I’ve ever done.’” He said. “There was no way I was ever going to do that again. It was just too much.”

But, like many competitors, after the initial shock associated with the body aches and pains subsided, Buchanan’s competitive juices kicked-in and he vowed to do it again and do it better. Thus, the run of Kona starts and Ironman acclaim between 1984 and 2006 had started.

“If you had told me after that first race that I was going to be doing another 15 of those races I would have told you that you’re crazy. That is one tough event,” he said. “But, when I decided to keep doing them, I didn’t show up to lose.”

Today, with an assortment of back and knee injuries eliminating running and biking, Buchanan exercises by swimming. He is also a locally known guru for coaching area triathletes or simply individuals seeking to improve their swim stroke.

His advice for those looking at doing a triathlon is to train in difficult conditions. “I tell them to ride their bike when it’s windy and train when it’s hot because it will make them mentally tough,” he said… like their coach.

Editor’s Note: William (Bill) Pennington is a former sports columnist for the Savannah Morning News and Florida Times-Union. He was honored as Writer-of-the-Year for the Road Runners Clubs of America as well as a Associated Press award winner and Georgia Sportswriter columnist winner. He is a contributing writer for the News-Leader. We thank Bill for his contribution to the Fernandina Observer.