According to Gil Langley, President and CEO of the Amelia Island Convention and Visitors Bureau, June and July are the two busiest months of the year for Amelia Island tourism.   If trends for the first quarter of 2013 continue for the remainder of the year, this could be a banner year for numbers of visitors.  The recent grand opening of the renovated and expanded Omni Amelia Island Plantation Resort at a cost of $85M will impact the trends further by expanding the island’s capacity to host large conferences and gatherings.

Amelia Island and Fernandina Beach tourism, both in terms of numbers of visitors and economic impact, is on the rise.  During the first quarter of 2013, the number of visitors increased by almost 9% over the same period in 2012, resulting in a corresponding rise in direct revenue increase of almost 16% for the same period. In absolute numbers, 122,200 visitors spent $74,055,600 resulting in a total economic impact of $97,435,000 on our island during what is traditionally a slow 3-month tourism period of the year.

Who are these tourists?  Where do they come from and why do they choose to visit Amelia Island?

The great majority of island visitors come from the southeast United States.  But it appears that an increasing numbers visit from the Midwest.  The top 5 states of origin include Florida, Georgia, Pennsylvania, New York and Ohio; the top 5 metropolitan areas generating our tourist numbers are Jacksonville, New York/New Jersey, Atlanta, Greater Orlando and Miami/Fort Lauderdale.

While this year’s visitors still ranked beautiful beaches (75.5%) slightly ahead of the historic downtown (74.6%), last year the beaches outranked the downtown by seven percentage points during the same period.

The Amelia Island Convention Visitors Bureau, headed by Gil Langley, is responsible for the various marketing campaigns that attract visitors to Amelia Island and Fernandina Beach.  They are the people who encourage businesses and organizations to hold their annual meetings and conferences here, place ads in magazines and newspapers around the country, and maintain an active presence online with their website.

More than 70% of the information visitors obtain about Amelia Island comes from the internet, whether from direct ads, ratings from services such as Travel Advisor, or travel writer reviews.  Forty percent of visitors have seen promotional materials produced by Langley’s group before setting foot on the island. 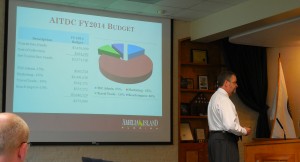 Langley runs a tight ship, with most of the tourism expenses dedicated to advertising and outreach as opposed to overhead.  The Convention Visitors Bureau reports to the Amelia Island Tourist Development Council (AIDTC), which was created by the Nassau County Board of County Commissioners in 1988 to oversee the development and marketing of Amelia Island as a world-class tourism destination. As provided by Florida law, the AITDC is responsible for the expenditure of revenues received from the levy and imposition of the tourism development tax, commonly referred to as “the bed tax.”

For more information about the AITDC visit their website.   There you can view their 2012 Annual Report and learn more about their marketing efforts and tourism related statistics.

Tourism puts bread on the table for many of our Nassau County residents. Tourists who stay overnight also help put sand on our beaches through the bed tax.  Let’s keep them coming back, along with their friends and families!