During a Special Meeting held at 5:00 p.m. on October 21, 2014, the Fernandina Beach City Commission (FBCC) rejected the recommendation of the city’s Airport Advisory Commission (AAC) and sided with the City Manager in deciding to locate the proposed airport welcome center on the east side of the airport property.  After a unanimous vote from the FBCC, City Manager Gerrity said that he would prepare an RFP seeking bids to construct the facility with a private partner.  If no bids were received, he said he would revisit siting the facility on the north side, as the AAC recommended.

The FBCC decided to take public input before discussing the matter among themselves.

Richard Gray, AAC Chair, spoke first to the commissioners.  He indicated that he was not speaking in an official capacity but as a private citizen.  He urged the FBCC to issue an RFP seeking a public/private partnership to build the welcome center on the east side of the airport.  The airport has invested considerable money in building infrastructure on the east side, he said.  At stake is an FDOT grant in the amount of approximately one million dollars.  But he added that such a building without an FBO [Fixed Base Operation] would be a dead building, a “monument to wasted dollars.”  He said, “We need a partnership with a viable FBO in that building.  If we get no responses to the RFP, then we will know that no one is interested in partnering with us.”  He urged, “Do not kick this can down the road.  Let’s protect the economic viability of this airport.”

At that point, City Manager/Acting Airport Manager Joe Gerrity advised commissioners that at a previous meeting AAC members had voted 3-2 in support of locating the facility on the north side of the airport.

Former AAC member Andy Curtin addressed the commission in support of locating the facility on the north side of the airport.  He cited the current Airport Layout Plan, which calls for a “terminal” on the north side, where land has been cleared and a ramp exists.  He said that the existing road system supports the north side location, where all services are available.  He suggested that the east side infrastructure had been added to support private development.

AAC member Kent McKee spoke next.  He reminded commissioners that the FDOT grant would “go away if we don’t use it this time”—a reference to an earlier grant for the same project which had to be returned when public sentiment ran against the project. He said that the existing building housing the sole FBO is shabby by any standards.  He feared that if a welcome center were to be built on the east side, it would be an empty building.  He expressed his opinion that it would probably be cheaper to build on the north side.

Tom Piscatello, another airport user, also supported the north side, since there was a backup power generator there that the FDOT would find useful in operating a “hardened building” as an emergency operations center as well as a welcome center. 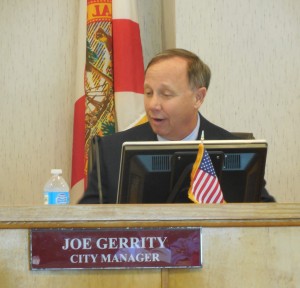 Following public input, Gerrity explained why he was at odds with the AAC’s preference for the north side location.  He said that whereas today it might look sensible to place the building on the north side, that picture would change in looking 20 years down the road.  He said that future development will be on the east side, and that he wants to seek an FBO partner for a welcome center on the east side.

The FBCC sought advice from Andrew Halesko of Passero Associates, the city’s airport consultant.  Halesko reinforced that the location decision was the commission’s.  He advised that access road issues need attention and will be addressed in the Airport Master Plan.  He said that the title of the building—terminal, welcome center, etc.—was not important.  But he reminded commissioners that the use of the building and its tenancy were factors that needed to be considered.

In addressing concerns and statements of the commissioners and the public, Halesko said that a tree mitigation plan would be developed for the east area of the airport with any type of development.  He also added, “I can’t imaging anything more difficult than putting two FBOs and the city in the same building.”  This was a reference to suggestions from some speakers that a welcome center be located between two FBOs, who could then share the facility.  He confirmed that there is more room to expand the apron on the east side, but that his company would make the building work in either location.

Commissioners discussed the options and agreed that the future development for the airport is on the east side.  They voted to accept that option with the proviso that if no bids were received to the city’s RFP seeking a partner to develop the building on the east side, they would return to the north side option.