Legends and pioneers…!  On certain special engagements, “TwoGrass” duo Eddie & Martha Adcock are joined by Tom Gray. Exciting, original and warmly intimate… rooted in their traditional heritage while often cruising the stratosphere… for both their singing and playing, they are surely one of the most dynamic bluegrass-and-beyond string trios you’ll ever have the pleasure to hear ! 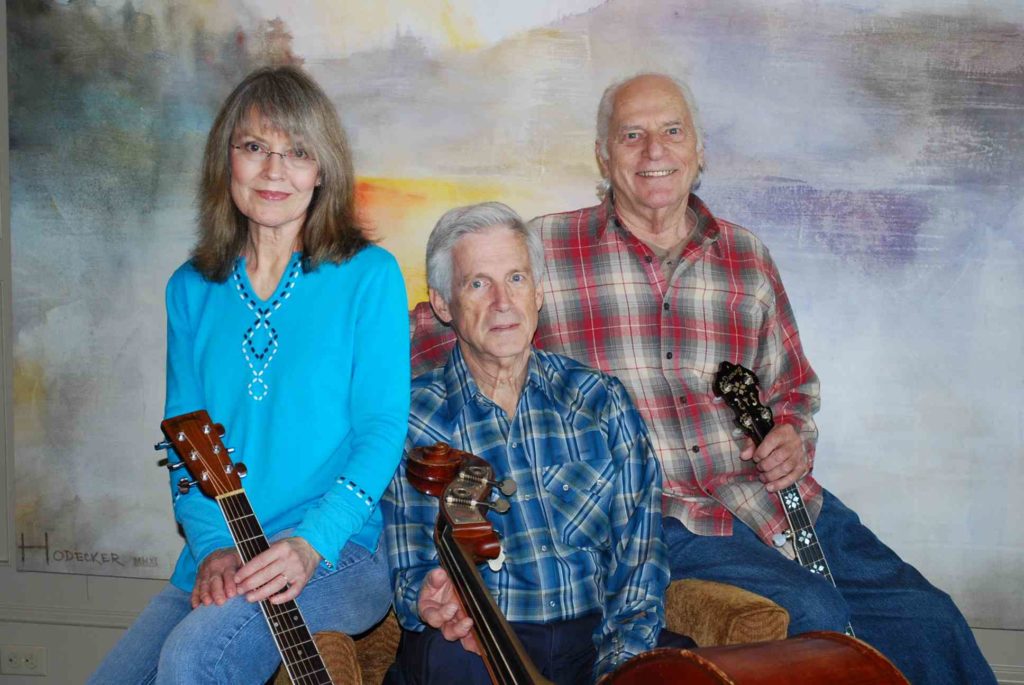 For a few years now, these folks have played concerts together whenever the opportunity presented, even touring Japan, Switzerland, Germany, Czech Republic, Belgium and Holland in a string of sold-out shows. They have appeared on national media such as TV’s ‘Song of the Mountains’. With their CD release, “Many A Mile”, they have eagerly hit the trail to bring their magic to fans and friends waiting worldwide.

The Adcocks are perhaps the most popular and enduring duo in bluegrass music today, joining forces four decades ago to play their special vibrant brand of it; and Tom Gray has long been one of the best-known and most respected bassists in bluegrass.

While Martha (a South Carolinian) is known for her evocative vocals and powerhouse rhythm guitar, Eddie (from Virginia) is lauded as one of the few truly original stylists on banjo and guitar in bluegrass music (recently famed as The Bionic Banjo Man due to three brain surgeries to alleviate hand tremor). Tom Gray (of Maryland) is a compelling, critically acclaimed bassist whose agile, creative playing is memorably distinctive. Vocally and instrumentally, they have few peers !

Eddie and Tom are also noted as the surviving half of one of the most innovative and influential bluegrass groups of all time, the legendary ‘Classic’ Country Gentlemen of the Washington DC area. Those iconic Country Gentlemen, which also included Charlie Waller and John Duffey, were inducted together as a band into the International Bluegrass Music Association’s Hall of Fame in 1996, the first group to be so awarded. The Gents also were installed in the Washington Area Music Association’s Hall of Fame in 2006; and Eddie & Tom received the DC Bluegrass Union’s Washington Monument Award in 2012, while Eddie accepted the Steve Martin Prize for Excellence in Banjo and Bluegrass in 2014. Martha has been designated a Pioneer of Bluegrass and is a featured chapter in the book “Pretty Good for a Girl: Women in Bluegrass”.

Eddie and Martha later partnered in the groundbreaking ’70s newgrass band II Generation, while Tom helped found the popular Seldom Scene group, all history-makers through decades. These three folks have garnered more awards and accolades than can be listed here.

Eddie & Martha Adcock with Tom Gray always deliver the goods, whether to a kid, a hipster, a boomer or a senior. Sentimental favorites and true legends in bluegrass, yet ever-fresh and vital, this band of multi-award-winners and Grammy nominees always entertains and musically delights !

A few quotes about …
Eddie & Martha Adcock with Tom Gray

“What a tremendous show last night in Herndon, Virginia, put on by Eddie & Martha Adcock with Tom Gray. The vocal harmonies were terrific as was the great work on banjo and guitar by Eddie and Tom on bass. Martha’s voice was as pure and magnificent as you could ever ask for, and when the fellas joined in the blend was super. These are some truly fine musicians who have been entertaining folks for several decades with many of the top bands in bluegrass music, and ‘the beat goes on’. See them every chance you get, folks — you’ll be glad you did.” Bob Thompson, coordinator, Weekend Bluegrass Concert Series, Herndon VA

“Eddie and Martha Adcock have always been welcomed to Godfrey’s as perhaps the most popular and enduring duo in bluegrass music today. This trip will add Tom Gray, the Seldom Scene bassist, making them one of the most dynamic acoustic trios you’ll ever hear. Sentimental favorites and true legends.”
Godfrey Daniels Coffeehouse, Bethlehem PA

“You all are fantastic! Last evening’s gathering was one of (if not the) biggest we’ve had to date. I would love to have you back again but I’ll probably need to put an addition on! Everyone loved you all. Thanks again to all of you.” Andy Bryson, Maryland concert host

“We so enjoyed your show last Thursday. People are still talking about the music and the wonderful turnout we had. Thanks so much!” Jennifer Brunson, Bishopville SC Opera House

“I was very happy to see you over here, and I have talked to many people who felt the same.
You have written another little piece of history, in addition to all the things you have done before.”
Rienk Janssen, European promoter and fan

“Such a treat to be able to chat and listen to a fantastic concert. The songs you did mean a lot to me since they were my first introduction to bluegrass. Still have 42 Country Gentlemen LPs 😉 .”
Pieter Groenveld, Strictly Country Records, Netherlands

“So honored to have had Tom Gray, a two-time Hall of Famer, play with Eddie Adcock (who just won the Steve Martin award) and Martha Hearon Adcock for our ‘House About Tonight’ music series. That was a memorable show.” Ruth Golden, Virginia promoter

“Thanks for coming home to play for us tonight! What a treat to see WORLD CLASS musicians live, right here in Bishopville! Not only that, you guys looked like you were having a great time up there. We sure had a great time listening to you. Travel safely. I hope we see you again soon.” Jared Smith, fan

Just got home from a memorable evening of music. Eddie and Martha Hearon Adcock gave a wonderful intimate performance with Tom Gray on bass. First thing is that any aspiring banjo player needs to see Eddie Adcock play up close. His technique is inspiring because he plays a unique style that must be seen. They are performing tomorrow at the Wind Gap festival if you want to check them out. I had a great conversation with Eddie about banjo setup, bluegrass music past, present and future and performance. Truly inspiring.
Pete Becker, fan

“So much talent on that stage….WOW!” Dan Ferguson, fan
—CONTINUED—
“Three living legends of bluegrass — one of the great innovative banjo pickers, a world class bass player, and one of the original terrific female vocalists. Thanks for another wonderful show.”
Joe Zauner, musician and fan

“Thank you Eddie and Martha Adcock and Tom Gray for the awesome show at Ashland Coffee and Tea last night! That was music that I will never get tired of listening to.” Coon Whitley, fan

“Thanks so much to you all for the concert last month. We were thoroughly impressed by your individual musicianship as well as the quality of the ensemble…. We are now enjoying your CD… We’re so glad you are playing together. Eddie and Martha, please join Tom and come back to Maryland again soon.”
Melissa Moye & Randy Barber, fans

I am super jazzed about the High Mountain Hay Fever Bluegrass Festival this year. As a child I heard the Country Gentlemen day and night, so their music is deep inside me. Eddie and Martha Adcock will be at the festival this year along with Tom Gray. When you’re another musician at the festival it’s slightly different than being a member of the audience but I will no doubt be a total fan-boy for this event. I can’t wait!
Kevin Slick, musician and fan

I really enjoyed your show in Wilmington and the songs that you played from your new CD.
Woody Snyder, WVUD Radio, Newark DE

“You guys are the best!!! ” Kathy Davis, musician and fan

“We had so much FUN seeing you guys.” Sherrie Good, fan

“They are great.” Daniel Bernard, fan

“Thank you for a wonderful concert.” Mike Sherman, fan

“It was fun! You all sounded great!” Laurie W. Casey, fan

“I was so glad to have a chance to see your concert and meet you all.” Esther Ann Haynes, fan

“We so much enjoyed our time with all of you at the Pickin’ House!” Nancy Jordan, fan

“You three richly brighten our lives, and for that, ‘Thank you!'” Don DePoy, musician and fan

“Some of my favorite people. Always loved it when they came to the Country Corner Coffee House many times.” David Helman, promoter and radio host

“Looking forward to having you back in Ol’ Hyden…. Hope I can pick one with you-all again. One of the highlights of my year…” Dean Osborne. musician and promoter

“Thank you for the great show.” The Lawsons, musicians and fans

Marlene, how can we expect the law to be followed when the l...
wpDiscuz
0
0
Would love your thoughts, please comment.x
()
x
| Reply
Comment Author Info