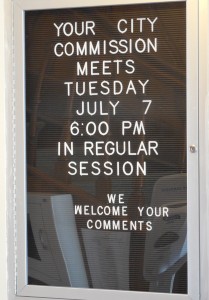 If you don’t sign up to speak before 15 minutes of a Fernandina Beach City Commission meeting have elapsed, you will not be able to speak at the meeting. That’s the word from the FBCC and its attorney Tammi Bach, who keeps track of the rules the FBCC makes for conduct of its meetings.

The rule, which has been on the books for three years and which also appears on each meeting’s printed agenda, has been largely ignored by recent commissions. But during a workshop on July 7, 2015, consensus was to uphold the rule going forward. Commissioners asked City Clerk Caroline Best to post a notice to that effect at the chamber entrance and on the city website.

Mayor Ed Boner was the only commissioner to express discomfort with the rule. But other commissioners reminded him that commissioners can always call upon citizens to speak, should the need arise.

Local resident Phil Chapman objected to having to fill out a form to speak. Citing his experience in Massachusetts in Town Meetings, he said that any person should be able to be recognized at any time for any concern by standing up and seeking recognition. He said that the phrase “freedom for all” includes freedom of expression, meaning that citizens can address their government without the need for forms.

Former mayor and commissioner Ron Sapp advised the commission, “Never forget that this is your meeting. It is not a Town Hall meeting. Don’t be afraid to use the gavel.”

Commissioner Robin Lentz reminded the audience and commissioners, “We are all available to hear people.”  Lentz added that people can sign up in advance of a meeting by notifying the clerk electronically.

Attorney Tammi Bach advised commissioners that they set rules of procedure for meetings. She also reminded them that while they generally follow Robert’s Rules of Procedure, they have modified some of the rules and may continue to do so. She said that if on occasion they choose to deviate from a standing rule, that does not mean that the FBCC has waived the rule.

While I understand the intent of the rule in maintaining an orderly meeting, I am afraid overall that it could impede good discussion and feedback from the community at times. Sometimes a commissioner makes a statement that comes out of the blue and invites a counterpoint from the community if not made by another commissioner, but without having signed up in advance, that perspective will not be able to be voiced in a comparable forum. Has FB gotten so big that a citizen can’t be recognized on an ad hoc basis to speak for three minutes?

It might be the commissioner’s meeting, but the commissioners are supposed to represent the people. Unfortunately, there are some that serve only to promote their personal agenda. Therefore, the people should have a right to speak at these meetings so their voice may be heard. Yes, things need to be done decently and in order, but do not dare stifle the free speech afforded to us by the US constitution!

I agree that there needs to be order in the meetings, so a form is fine, but I’d prefer to see them honored during the meeting in addition to advanced registration. Just my 2 cents worth…..

It’s a sad day for local democracy in Fernandina when our elected public officials decide to take actions that have a dampening and limiting effect on citizen’s right to participate. Whoa be it to the person who has to work late and cannot get to a meeting before 5:45. Whoa be it to someone who has other responsibilities, yet wants public input into their local governance system. Over the past 13 years, I’ve attended many city commission meetings and few have disintegrated to the point of chaos. I agree with former Commissioner Sapp, “don’t be afraid to use the gavel” so that a meeting does not get out of hand. That is an expression of leadership. I find it sad that this is one step towards earnest public debate being squelched in our community. In the final analysis, I guess on Tuesday nights this will help City Commissioners get home to dinner a tad earlier, always important……

Being at most of the meetings, I understand the forms on one hand but on the other, as my husband stated at the meeting and Dave and Ben stated, we should be abke to respond or ask questions as we go! Mayor Boner stated that that my cause alot of back and forth discussion….well, isn’t that what the meetings are about….community input and concerns. We were told on one hand that we could just sign up to speak for all points, then when the point came up and we didn’t have anything to say, just pass…that’s a bit crazy to me! After all of the discussion about the 15 minute rule, an exception was made and papers were accepted almost throughout the meeting! Maybe it’s due to these rules and changes many islanders have decided to stay home??!!

The citizens should be allowed in the discourse of Commission meetings. The Mayor has the ultimate power to facilitate all discussions. If during any topic it becomes obvious someone is “beating a dead horse”the mayor can stop that conversation. Please allow citizens to still be part of all dialog through out these meetings. That’s true Democracy.