February 2021 has been designated National African American History Month.  The Fernandina Observer will highlight several local African Americans who have played an important role in our history throughout this month.

William Henderson Peck (1859-1950) was an educator and mentor. Born a slave in Virginia, he became well respected in both the African-American and White communities of Amelia Island, FL long before integration.

In 1880 African Americans in Nassau County, FL petitioned for a high school which was constructed in 1884. The following year Moses H. Payne of Howard University became principal. William Peck, a graduate of Howard University, came to Fernandina in 1887 and became his assistant.  When Professor Payne died in a yellow fever epidemic in 1887, Peck took over as principal, a position he held for 50 years. By 1894 he had established a program serving students through the 10th grade and, in 1908, had a full high school curriculum. 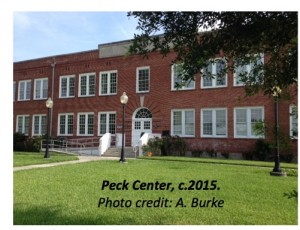 The building constructed in 1927 that become Nassau Colored School Number 1, was renamed Peck High School in1928. The school was constructed using funds from the Julius Rosenwald Foundation, which served black children until desegregation. Due to integration of students in the county’s school system, the last class to attend Peck High School was 1969, and now the building is a mufti-purpose Peck Community Center.

History of the school is commemorated on a State Historic Marker outside the imposing building which is part of the Fernandina Beach Historic District.  The Peck Center is located at 56 South 10th Street, Fernandina Beach, FL.

William Peck died in 1950. His grave in Fernandina’s Bosque Bello Cemetery was remarked by his family in 2008 with a granite headstone.

In 2000, Professor Peck was nominated for the distinguished Great Floridians Award, an honor for him, his school and his community. His award is displayed at Peck Community Center.  His Great Floridian plaque is located at the Peck Center (formerly Peck High School).

The author credits the Amelia Island Museum of History ; the Great Floridians 2000 Program  and Find A Grave  for information contained in this article.