February 2021 has been designated National African American History Month.  The Fernandina Observer will highlight several local African Americans who have played an important role in our history throughout this month.

Although Jacksonville claims him as their own, Abraham Lincoln Lewis (1865-1947) played a significant role in the history of Amelia Island in advancing both land ownership opportunities and recreational opportunities for African Americans.  A businessman, a humanitarian and a philanthropist, Lewis spent his lifetime working to overcome and compensate for the segregationist inequities imposed on Blacks.

Despite his humble beginnings, Lewis rose from poverty to become one of Florida’s first African-American millionaires.

But who was Abraham Lincoln Lewis, and how did he finance his philanthropy?  More generally called A.L. Lewis, he was the son of a South Carolina blacksmith who had been a slave on one of the many plantations in Madison County, Florida. As slaves, his parents, Judy and Robert Lewis, could have belonged to any of a number of slave owning planters who had migrated to Madison County, Florida from South Carolina. In grateful tribute to the man who had just set them free, his parents named him Abraham Lincoln, a name he never used, instead choosing to be known as A. L. Lewis. 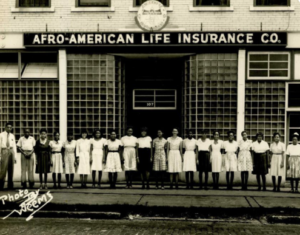 In 1876 he moved with his family to the East Side of Jacksonville. Lewis was one of the founding partners of the Afro-American Industrial and Benefit Association, the state’s first chartered black insurance company. Although the company was destroyed in the Great Jacksonville Fire of 1901, Lewis rebuilt it, becoming the first manager of the association and then president of the firm, which was renamed the Afro-American Insurance Company, commonly called “The Afro.”.  The company was founded to provide affordable life and burial insurance to the Black community. Consistent with that objective, Lewis worked to ensure that the Black population of Jacksonville had burial grounds available to them because they were precluded from buying lots in the White cemeteries. Deeds to cemetery lots in White cemeteries often included language precluding sale to Negroes.  Eventually  the company acquired Chathorn Mutual Life Insurance Company and expanded into Georgia.

Lewis helped to found both the Negro Business League and the National Negro Insurance Association.

Lewis’ philanthropic work also included donations to public and private schools across the country for the education of African- American youth.. He was a heavy contributor to Black colleges such as Jacksonville’s

Due to the Jim Crow Laws of the day, Blacks were not allowed to enjoy many basic recreational amenities. A.L. Lewis realized the need for African Americans to have recreational activities for their families, so he founded the Lincoln Golf and Country Club, which featured a clubhouse and facilities. In 1935, he continued his work to promote the quality of life for African Americans with the founding of American Beach. 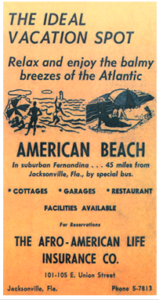 A.L. Lewis died in 1947 and was interred in the family crypt in a historic Black Jacksonville cemetery. The grave is along the road with a plaque marker placed by the city inscribed with his biography. There is a street as well as a youth center named in his honor.

As part of its commemoration of the beginning of a new century, the State of Florida honored 2000 individuals important to the history and development of the state by naming them to the Great Floridians 2000 program.  The program was designed to recognize individuals who distinguished themselves through their philanthropy, public service or personal or professional service, and who have enhanced the lives of Florida’s citizens. Abraham Lincoln Lewis was one of the honorees.  His Great Floridian plaque is located at Community Connections, A.L. Lewis Center, 3655 Ribault Scenic Drive, Jacksonville.

The author credits the following sources, and is indebted to the authors:  Wikipedia, ;Find A Grave, ; Great Floridians 2000 ; and the Amelia Island Museum of History.

For much more information about American Beach click here or visit the American Beach Museum located at 1600 Julia Street on Amelia Island just south of the City of Fernandina Beach.

Thank you for your continual efforts to report on what is truly important for our Island, Suanne Thamm. I trust that this wonderful tribute will inspire people to visit the community center at American Beach (on Julia Street off A1A) to learn more from the A. L. Lewis Historical Society – and to join it! Thank you again.

Wonderful story. I am also proud that my grandfather Judge H V Burgess was Nassau County Judge when American Beach was founded.

I believe all our lift stations and wastewater line are in d...
wpDiscuz
3
0
Would love your thoughts, please comment.x
()
x
| Reply
Comment Author Info