“We don’t know what the future for recycling will be, but we do know that recycling programs and initiatives are spiraling and there is no relief in sight. We will need to make significant changes to the City’s recycling program in the very near future.” Jeremiah Glisson 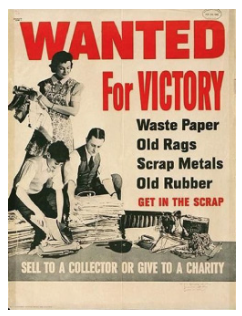 Although institutionalized recycling is relatively new to Americans, the practice of recycling dates back centuries to the Japanese who recycled paper in the 9th Century. Even here in the United States, many of us remember the recycling of milk bottles, as the milkman picked up our empties when he deposited fresh milk at our doorsteps. During wars, Americans collected and recycled metals for use by the arms and war industries. In former times in many cities, ragmen pushed carts through neighborhoods calling out for worn out clothing and dry goods that could be reused in some form or fashion with a bit of work and talent.

“People recycled far more than we do now,” says Susan Strasser, author of Waste and Want: A Social History of Trash. “If the elbows in a shirt wore out, you’d take the sleeves off, turn them inside out, and voila: new shirt. If a dress went out of style, you added new buttons or sent it back to the dressmaker to fashion a trendier frock. Eventually, the fabric would be turned into a quilt or a rag rug or just a rag.”

But recycling as we know it today began 30-40 years ago, as Americans began to understand the consequences of living in a “throw away” society. In addition to depleting resources, polluting our air and water, and producing greenhouse gases, we learned that we were starting to have difficulty getting rid of our waste. Landfills were filling up quickly, dumping at sea was becoming a no-no.

The nation observed the first Earth Day in 1970, which put a public focus on human activities that were threatening the earth, our environments and even public health. Interest grew in organic farming, composting food and yard trimmings, and finding new ways to reuse the plastic, paper, metal and glass that routinely make up the trash generated by households.

Along the way local governments found that a community supported recycling program could not only prolong the life of their landfills, but also return money to the public coffers. China became a lucrative market for America’s recycled trash.

The Florida Legislature, through the Energy, Climate Change and Economic Security Act of 2008, established a statewide weight-based recycling goal of 75% by 2020. The Act instituted the 75% recycling goal, directed the Florida Department of Environmental Protection (DEP) to establish a reporting protocol and directed counties to report annually. The Legislature also established interim recycling goals: 40% by 2012, 50% by 2014, 60% by 2016 and 70% by 2018.

School children were taught the benefits of recycling. Some states required consumers to pay deposits on soft drink bottles and cans, to insure that the empties would not be tossed in a trash bin. Businesses and government invested in recycling receptacles to make it easy for people to separate their trash.

But then something happened. 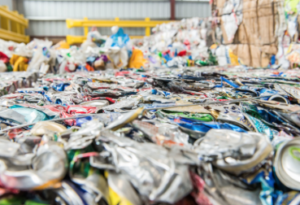 According to a report published by the Florida Department of Environmental Protection, recycling in Florida has changed vastly over the last 10 years. Many of the challenges have occurred due to changes in collection, shifts in the recycling markets and contamination of recyclables (i.e., collection of unwanted materials). DEP was working in partnership with the state’s local governments and the commercial and institutional sectors to achieve the statutory, weight-based recycling goal of 75% by the year 2020. This goal applied to all counties over 100,000 in population, which covers 95% of the state’s population and the associated 45 million tons of Municipal Solid Waste generated.

Perhaps the biggest blow to recycling occurred when China, India and other Asian nations stopped buying America-generated recycled material. Initially, the importer countries weren’t too picky, but that changed in 2018. The reason? Too much contamination. Plus, as these nations developed, they had their own recyclables.

According to Florida Trend Magazine, “By 2020, Florida’s plastic waste exports had fallen 71 percent to $8M. China went from the Number 1 market for Florida waste plastic to 78th last year, when it bought just $22,000.” 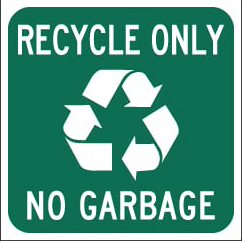 Contaminants come in many forms, but the primary cause is people who don’t care about recycling and just dump trash of all sorts into any container. But there are also problems with improper labeling of materials by manufacturers. In other words, just because the product says it can be recycled, doesn’t mean that’s true.

And just because a product can be recycled, doesn’t mean there is a market for it. The biggest example of this is glass. There is no market for glass, which by weight makes up a large share of household recyclables (wine bottles, anyone?) and also breaks and splinters as it makes its way from our recycle bins to trucks to conveyor belts in the recycle centers. According to Jeremiah Glisson, Fernandina Beach’s Maintenance Manager who oversees waste removal, piles of glass build up in the recycling center. When the pile reaches a certain size, it is carted off to — you guessed it — the landfill. Why? It is easier and cheaper to manufacture new glass from scratch than to process recycled glass.

There is still a good market for recycled cardboard and paper and metal, provided that it is not contaminated with liquids. Sadly, many people fail to empty liquids before placing them in recycle bins. Also, there is the question of pizza boxes which sometimes contain a piece of pizza along with the natural grease that bleeds into the box.

“If a recycler can’t be confident enough that they have a market for at least maybe six months to a year,” she says, “then they aren’t going to want to make that investment in their own facilities” to make more recycled plastic.

A report from ICIS, a plastics market research company, says the petrochemical industry will likely double its plastic manufacturing capacity from 2016 to 2024. And the American Chemistry Council, which represents, among others, plastics manufacturers, says it expects industry to spend nearly $25 billion to build new plastic manufacturing capacity by 2025. (That compares with the $1.5 billion that the industry plans to spend on cleaning up plastic waste.) The World Economic Forum has issued a report on plastic that predicts a doubling of production in the next two decades.

Another big challenge for the recycling industry is getting consumers to buy recycled products. Without consumer demand, there seems little point to invest in the process.

Bringing it all back home

Florida Trend published a comprehensive article on the state of recycling in Florida in its July 2021 issue. In a piece entitled “Is Recycling a Waste?” by Mike Vogel, it appears that several Florida cities are opting to drop curbside recycling.

The city of Deltona in Central Florida discovered that it was paying $80 per ton to process waste paper that sold for $5 per ton. Deerfield Beach tried to address its contamination problem with a $25K award winning educational program. It didn’t work. The City found that curbside recycling was costing nearly $100 per ton while regular garbage disposal cost about $42 per ton. Some other communities have also dropped curbside recycling. Many other Florida communities are grappling with the problem, notably Jacksonville.

Currently, residential recycling is built into the Fernandina Beach monthly garbage bill. Waste Management, the City’s waste removal contractor, assigns a cost of $4.41 per month for weekly curbside recycling excluding yard debris, which is collected by the City.

City Maintenance Manager Jeremiah Glisson reports that residential recycling is around 135 tons/month with about a 15-20% contamination rate. He said that recycling costs $110/ton at the North Florida Recycling Center in Jacksonville and the disposal of trash at the landfill is around $35/ton. Glisson wrote in an email, “The market for recyclables changes daily and I don’t have access to the market rates for the Jacksonville region. Over the last couple of years, the only profitable items have been cardboard and metal cans. Westrock is the reason that cardboard is a valuable recyclable. According to Westrock, they have a target consumption of 400 tons of recycled fiber PER DAY.”

Can the problem be fixed?

Getting full compliance from both residents and visitors is a daunting task, as Deerfield Beach discovered after spending $25K on an educational program. And as stated earlier, just because some waste can be recycled, does not mean there is a market for it.

Perhaps the way in which curbside recycling is done needs to change. First off, it doesn’t seem to make sense to recycle glass which has no market. Placing glass in the regular waste bins would make the recycle loads lighter and therefore cost less to the City.

Single-stream recycling, where all recyclables are placed into the same bin, has made recycling easier for consumers, but results in about one-quarter of the material being contaminated. Perhaps we need to return to the practice of separating recyclables by category: paper, metal, plastic.

But the real solutions to the problem lie outside the scope of local government remits. New technology solutions and opening up new markets for recycled plastics and paper must be addressed by the private sector at state and national levels.

Glisson concluded, “We don’t know what the future for recycling will be, but we do know that recycling programs and initiatives are spiraling and there is no relief in sight. We will need to make significant changes to the City’s recycling program in the very near future.”

The question left for us is this: do we continue curbside recycling that is not cost effective because it makes us feel good?

For more read:
Recycling in the U.S. Is Broken. How Do We Fix It? by Renee Cho

Is recycling a waste? Here’s the answer from a plastics expert before you ditch the effort by Eric Rosenbaum

Is recycling a Waste? by Mike Vogel