By Renzo Downey
FloridaPolitics.com
May 9, 2020 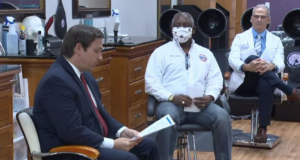 Gov. Ron DeSantis will allow barbershops and salons to reopen Monday in any county under Phase One.

The Governor tweeted the announcement Friday after teasing possible news during a press conference earlier in Jacksonville.

“We’re being very judicious on everything we’re doing, but I absolutely see a path, and I think if people watch out, I think that you’ll be hearing something on that very soon,” the Governor said during the news conference.

When the state began to reopen Monday as the fight against COVID-19 turned to the economy, DeSantis extended the ban on close-contact personal services. A week later he pulled the trigger for barbershops and salons.

But on the day his task force discussed ways to reopen barbershops, President Donald Trump, in a Twitter denial that he gave Georgia Gov. Brian Kemp the OK to open businesses in his state, listed salons and barbershops as businesses that shouldn’t open as readily.

“Spas, beauty salons, tattoo parlors, & barber shops should take a little slower path, but I told the Governor to do what is right for the great people of Georgia (& USA)!” Trump tweeted.

Although salons did not reopen Monday, DeSantis sat down with Orlando Mayor Jerry Demings and industry and health experts over the weekend at Demings’ request.

“They were all talking about ‘here’s what we would do,’ and I think the ideas were great, so those ideas have been taken, they’ve been internalized,” the Governor said Friday. “The Health [Department] has looked at them, other physicians have looked at them, so I think it’s going in a really good direction.”

Some of those suggestions included using masks and the cleaning expectations necessary to keep the close-contact industry sanitary.

“But my view is if you have somewhere there’s interaction, if you can do things like mask and other things that would make it low risk, then we’ve got to figure out a way to do that,” DeSantis said.

He didn’t give an indication of whether the reopening would come during Phase Two or if he might issue an in-between step. But the Twitter announcement, featuring J Henry of J Henry’s Barber Shop in Orlando, leaves no room for interpretation: Haircuts will be OK starting Monday.