Meeting in Workshop session on August 5, 2020, the Fernandina Beach City Commission (FBCC) received City Manager Dale Martin’s revised City Budget for the next fiscal year, which begins October 1, 2020. Following the FBCC’s adoption on a 3-2 vote of the adjusted rollback rate on July 28, Martin and his department heads went back to the drawing board to make the necessary budget cuts to conform to the lowered tax rate of 5.4683 from the rate initially proposed: 5.8553. Generally, the FBCC arrived at consensus on budget cuts, following discussion. 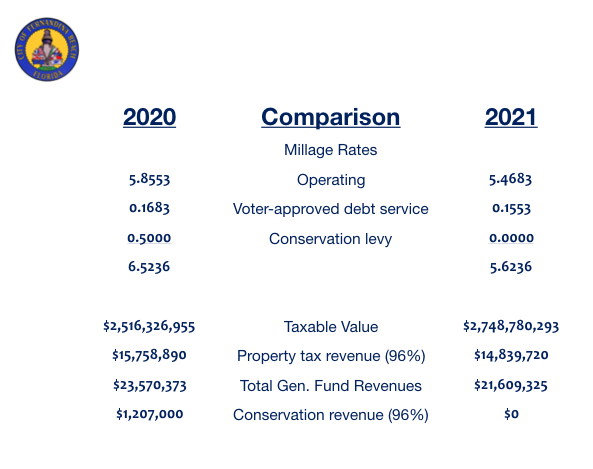 Following direction from the FBCC and listening to public comments on July 28, Martin proposed revisions to the General Fund operating fund budget: 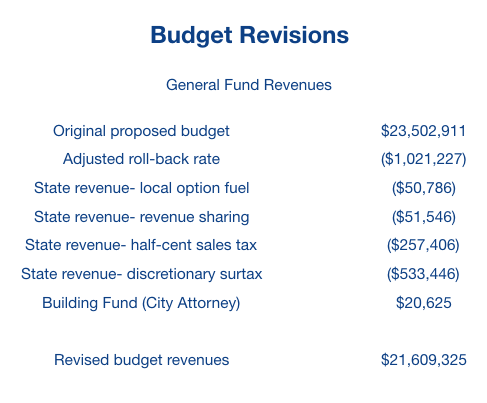 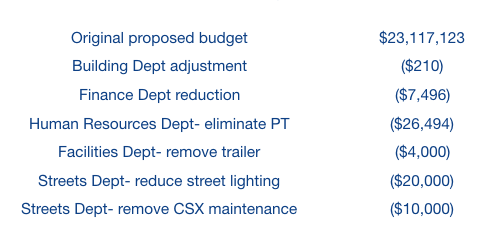 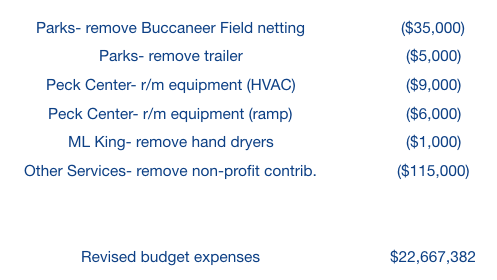 The so-called Stantec Report, which recommended significant General Fund subsidies to the Marina and Golf Enterprise Funds to discharge debts, was eliminated during this discussion. However, City Manager Martin has reported that various options may be discussed at the next Budget Workshop on August 11, 2020 at 6:00 p.m. in City Commission Chambers.

The most controversial of the proposed cuts was elimination of $115K in grants to non-profit agencies, such as the Council on Aging and the Barnabas Center. All Commissioners pushed back on that proposed cut, directing the City Manager instead to reduce the City’s emergency reserve by $115K, agreeing that the impact on the community of the Covid-19 pandemic constituted an emergency.

According to Martin, the lowered millage rate is estimated to produce a reduction of approximately $77 per $102,300 of Taxable Value (11.81 percent reduction) for homesteaded properties and an estimated reduction of $53 per $106,600 (8.11 percent reduction) for non-homesteaded properties. He cautioned that the estimate could vary based upon specific Market Value changes to individual properties as determined by the County Property Appraiser. 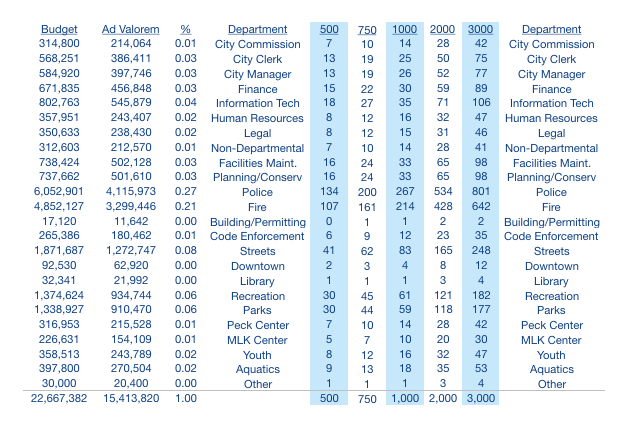 Commissioners were adamant in supporting the full funding for community non-profit agencies. They cited the economic impact of the Covid-19 pandemic on workers and businesses, expressing fears that the situation would continue to worsen into 2021.

Vice Mayor Len Kreger said, “I think we need to keep that money in there. Since we have a 23 percent reserve fund [20 percent is the recommended amount], I think we should take the $115,000 cut there.”

City Manager Martin explained that the Budget does not take into account money the City expects to be remitted from the Ocean Highway and Port Authority (OHPA) or CARES money. “There is some money we expect,” he said, “but because we are unsure of the timing, we don’t have it in the Budget.” Technically, unallocated future revenues could be used to reimburse the reserve fund.

Commissioner Chip Ross said that he agreed with full funding of the non-profits, but he did not support taking the money from reserves. “This pandemic is not going to end this year, next year,” he said. “Now is the time we should be adding to the reserves.”

Kreger agreed. He suggested going back to take the money from Department Budgets. He said, “I would bite the bullet on vehicles.” Kreger suggested leaving the decision on where to cut the $115K to the City Manager.

Commissioner Mike Lednovich said, “Our reserves are there for emergencies. I thinking that helping our poor, needy and unemployed would be an emergency. [Citing GDP figures] Anyone who doesn’t think we are going over a cliff isn’t paying attention. Come the end of September when aid runs out to big corporations, we’ll see layoffs and business contraction. Our local non-profits are going to be under great duress. Taking another $115,000 out of reserves is not going to kill us.”

Ross said, “The bottom of that cliff is not going to happen this year. Things are going to get worse not better. So we need to hang on to reserves.”

Lednovich said, “I think the other point we need to recognize is that our revenues will increase next year with annexations and new construction coming on the tax rolls.” He cited Crane Island and new hotels.

“Just because we adopt a new budget, it doesn’t mean that we go off and spend it all on the first day of the new Fiscal Year. As Comptroller Pauline Testagrose has reported, although we are 75 percent through the current Fiscal Year, we have only spent 58 percent of anticipated expenditures.” Martin continued, “ We have an entire year to make adjustments to the approved budget as revenues and expenditures fluctuate. It is a living document.”

Martin clarified for Lednovich that the $75K for a project manager to work on updating the City’s Comprehensive Plan and Land Development Code was still in the budget, but the $250K proposed for consultants had been eliminated. Lednovich suggested cutting the $75K as non essential, since there is no state mandate to update these items. “Why don’t we just delay this?”

Ross disagreed in delaying these items. Kreger agreed that it is non-essential, along with other items in the budget, that will need to be examined in the upcoming year. “This is a working document that we adjust as we see fit. Where is the pandemic? Is there a vaccine coming? I just don’t see the economy bouncing back for a long time. We need to look at everything that is nonessential when the time comes,” Kreger said. Mayor Miller said that the FBCC needs to seek input from the Planning Advisory Board before taking action as Lednovich suggested. 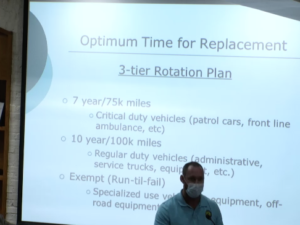 City Fleet Manager Jeremiah Glisson briefed the FBCC on the City’s 250-item fleet and the replacement plan adopted in 2005/06. The plan provided centralization and standardization, which reduced costs for the city. He explained how the city determines optimum time for vehicle replacement, which allows the city to avoid costly repairs and sell vehicles that have been fully depreciated.

Ross complimented Glisson on the work that he continues to do to keep the fleet operating while saving the City money. “You really do a nice job, and I appreciate it. You obviously show what government employees can do, and we really appreciate your service to the City.” Mayor Miller and other Commissioners signified their concurrence.

Kreger acknowledged that the City has a “great fleet program,” but that it is paying for it with lack of maintenance on buildings. “We have to balance needs and see where we are going across the board,” he said. “We will make adjustments as revenues increase or decrease to stay within the budget. Everything is open to discussion and consideration.”

Although many people attended the July 28 Budget Meeting, few people attended the August 5 Workshop. Only one person — former City Comptroller Patti Clifford — spoke. She expressed surprise that pulling back on the General Fund subsidies to the Marina and the Golf Course was not part of the City Manager’s presentation. “I think you really need to look at the full time staff, health benefits, pension benefits,” she said, expressing disappointment that only two part time positions had been pulled. She urged a hiring freeze and also urged Commissioners to be mindful of reserve funds, although she supported funding the non-profits.

In summarizing direction he had received from the FBCC, Martin said that he would revise the budget to reinsert the funding for non-profits, using money from reserves, adding that unanticipated revenues would be placed in the reserves fund.