Faux Fernandina – A Hurricane Dora photo – A look back 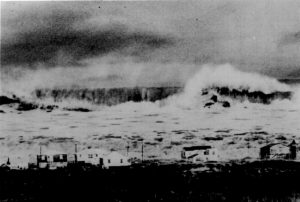 Editor’s Note:  This story helped me realize the extraordinary power of the press.  Now when someone posts the “Faux Fernandina” photo, on Facebook, it is quickly dismissed.  Thanks to my old friend Clint Rich for helping me debunk the myth.

Rarely does a back-and-forth Facebook conversation capture my attention, but a recent one certainly did. The conversation began when area native Terry McKendree posted a photo of a row of beach houses with a tsunami-like wave crashing in the background. Surely an attention grabber, the photo was supposedly taken in Fernandina Beach in 1964 during Hurricane Dora, one of the worst hurricanes to visit our coastal community in my lifetime.

McKendree was certain of the photo’s origin; after all, the photo was included in a 2014 National Weather Service publication entited  “The 50th Anniversary of “Hurricane Dora The Storm of Legend in Jacksonville,”  by National Weather Service meteorologist Al Sandrick. It was presented at the Florida Governor’s Hurricane Conference citing Fernandina Beach – Amelia Island as the photo’s location. Sandrick’s caption read, “Note the size of homes to wave action!”

The Facebook conversation continued to pique my interest as Fernandina native William Willis joined in to authenticate the photo with an eyewitness report: “It happened during the day. I was at north beach, I went outside into the eye, and witnessed the destructive wave.”

Another Fernandina native and Facebook poster, Clint Rich, was doubtful. He had seen the photo at Ron Jon’s Surf Shop in Cocoa Beach in the early 1970s. (A good way to sell surf boards!) Rich said three different people, we assume unrelated, have told him their father or grandfather captured the photo from the dunes on the north end of Amelia.

Long-time resident Clinch Kavanaugh spotted the same photo in a shop on the Outer Banks of North Carolina in the late 1990s. Michael Leary confirmed the Outer Banks attribute when he posted the photo with the inscription, “Ash Wednesday Storm, March 7, 1962, Kitty Hawk, N. C.”

The latest count on McKendree’s initial post shows the photo was shared by 62 people. The ripple effect has been amazing!

The “wave photo” is truly ubiquitous. Years ago when I attended an Emergency Management presentation, the wave scene was the first photo shown. It was meant to scare the dickens out of those in attendance. Recently, at the regular meeting of the Fernandina Beach City Commission, the photo appeared in Vice Mayor Len Kreger’s presentation of a Dune and Beach Management Plan. It even appeared on the city’s website.

According to Rich, every year around hurricane season the dubious photo appears. A couple of weeks prior to McKendree’s post, Rich said to his wife, “Get ready for the picture to pop up again!” And suddenly it appeared.

Lest you think I’m judging anyone for believing the photo’s local origin, I was duped myself! I purchased the photo in the late 1990s from a photo shop on Sadler Road. It must have been a big seller since my co-worker Suanne Thamm bought the photo at the same shop. I was told that Ray Caldwell, former editor of the News Leader, took the photo from the lighthouse. When Robert Feige, longtime employee of the News Leader joined the Facebook thread and posted numerous pages of the News Leader Hurricane Dora coverage without the big wave photo, I became a non-believer. This photo is for sure “Faux Fernandina.”

A Google search led me to a conversation on an Outer Banks website, and there again was the photo! When a forum participant asked if the photo was real, Eve Turek, well-known photographer and owner of Yellow House Gallery in Nags Head, responded.

Turek sells copies of the wave photo in her gallery. Around 2009, a customer identified the photographer as Linda Westerman. Eventually, Turek and Westerman met, and Westerman showed Turek a negative of the original photo along with other photos she took in the summer.

Westerman explained to Turek that in 1972, she waited tables on the Outer Banks during her summer break from college. As a fine arts major, with a focus on photography, she set up her own darkroom. An assignment for her senior portfolio was to create a “trick” a photograph by stacking two or more negatives together. One of her photos was a close-up of a wave during a summer squall; the other photo was of a row of houses Westerman believes were located in Kitty Hawk. According to Turek, “she made the composite photo with no intention of deceiving Outer Bankers.” Turek continues to sell the photos in her Yellow House Gallery, but royalties now go to Westerman.

Whether or not the above information could ever hold up in a court of law is anyone’s guess, but with all the circumstantial evidence we have, I’m considering the mystery solved.

The photograph in question was not taken in Fernandina Beach during Hurricane Dora.

I can assure you that my copy of the photo is destined for the trash, but like Clint Rich, I will expect to see that familiar faux photo on Facebook in 2018 just as the next hurricane season begins.

Editor’s Note: In the event the Fernandina Observer is able to locate Linda Westerman who took the original photograph, we will prepare a follow up article. Our thanks to Eve Turek, owner of the Yellowhouse Gallery who graciously took my phone call and is assisting us in our quest to locate Westerman. Turek’s testimony is solid!

To view complete testimony from Eve Turek, click here and scroll down to EveT response.

Update: After a long delay, I was able to reach Linda Westerman regarding her photo. Linda was aware the photo appeared in an Outer Banks restaurant, but she was flabbergasted that the photo had made its way down the coast of Florida and to the cover of the 2014 National Weather Service write-up. She confirmed the merged photo was a photography assignment when she was in college. Westerman said the Tsunami wave was taken when the ocean waves were fairly calm.  By the way, she received an “A” for her project.

This s no way Fernandina Beach. No homes ever looked this way on our Island. Period.

As a folklorist, I love this story!! This is exactly why the study of “folklore” is so relevant to all of us . . . a huge proportion of what we consider “truth” is actually passed down “knowledge” from one person to the next . . . remember the children’s game “telephone”? After passing on a sentence from one to another, the entire meaning changes after four people have passed it along. In 2022 we are seeing a lot of folklore/faux-lore being passed along as “truth” — just sayin’

OK while the picture may not be “real” I lived there and know for a fact we lost a row of homes and the huge sand dunes that lined the main beach area. So something took out those houses and the sand dunes!

Great piece of work, Thank you for sharing!

The tall curbs on the east side of Front Street were r...
wpDiscuz
7
0
Would love your thoughts, please comment.x
()
x
| Reply
Comment Author Info