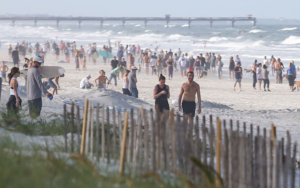 The City of Fernandina Beach and Nassau County have been meeting and talking to coordinate a common approach to reopening island beaches.  Apparently the County abandoned that effort yesterday, April 28, when it issued to area media a press release at 2:50 p.m.in advance of a decision that it did not coordinate with the City.  The City was alerted to the press release by a member of the local media at 4:39 p.m.

Please be advised that City beaches will not be opening on May 1. As discussed in an earlier telephone call, several reasons for a May 4 opening were offered. My discussions with several City Commissioners have indicated support for the May 4 date: a less busy week day, the availability of Ocean Rescue personnel, and the apparent relaxation of Jacksonville/Duval County beach restrictions on the same day.

If the stated effort was to coordinate the opening of beaches, actual coordination has been lacking, with the dates of first May 6 and now May 1 being publicly presented with little involvement of City officials prior to announcements (not even included in the distribution of the press release below).

It is currently anticipated that City beaches will open Monday, May 4, at 6:00 AM for full access and activities with compliance with social distancing and gathering to be monitored. All parking areas will be open with the exception of on-beach parking at Seaside Park (Sadler Road)- due to the usual high-density of beach traffic and pedestrians at that site. It is the further intent to restore on-beach parking after observing appropriate compliance with social distancing restrictions.

Mullin replied to Martin in the following email:

Dale thanks for the e-mail. I know that you and I were on the phone at least 3 times today and many times over the last several weeks. Our goal is to coordinate. We chose May 6th as an outside date to allow for co-ordination with the City and State. I know the City originally indicated that the beach should not open unless 4 criteria were met and the reasons were understandable . We were also advised those had changed and the opening was based on the State’s decision regarding their beach controlled areas. Today you indicated that the City plan was to open May 4th based on availability of lifeguards and also Duval indicated they would change their restrictions effective May 4th. The City, as you indicated, will allow the use of chairs, etc.. and we had discussed that as well. We are also consulting with the State  and the Board will be made aware of the 4th at their meeting tomorrow. The dates may not be the same, but I donot know that as I am sending this message, but the re-opening has been co-ordinated even if we are a few days apart. The uses may end up being the same as well. Our press release was to give a heads up to the citizens of what was under consideration and to provide the info. to the State so that they act quicker. Let’s keep the dialogue going and we can all look forward to a resumption of beach activities.

According to City Manager Dale Martin contacted this morning (April 29), the City will probably open its beaches on Monday, May 4, with no restriction on hours or activities except for limited gatherings and social distancing policies remaining in effect.  While parking lots will reopen, parking on the beach at the Sadler Road entrance will be delayed to allow time to observe that beachgoers are adhering to social gathering and distancing policiies.