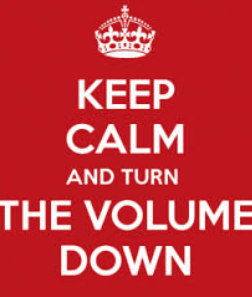 The City of Fernandina Beach last revised its noise ordinance in 2017 to the relief of some and consternation of others in the community.  Where you stand on the issue depends on whether you are partying in local restaurants that offer live music or trying to enjoy a quiet evening in your neighboring home.  But until the recent opening of the Boat House Restaurant, an uneasy peace seemed to have existed between both parties.

In the midst of the latest Fernandina Beach kerfuffle over the sound levels of amplified music in the downtown area, some have suggested that problems could be eliminated by introducing decibel meters and by modeling ordinances of the city of St. Augustine. But have these people read the St. Augustine ordinances?

At first glance it appears that the “model ordinances” are much more restrictive than those of Fernandina Beach.  Example:

(a)  It shall be unlawful for any person, owner, manager or employee in charge of any store, garage, filling station, apartment house, theatre, hotel, tourist camp, cottage settlement camp, mercantile or other business or other premises where persons gather to enter for the purpose of amusement or trade within the corporate limits of the city, either by their own actions or by permitting or allowing any person who may resort, occupy or possess their premises by day or by night, to disturb the public traffic, the neighbors or public peace by advertisement, loud cries, boisterous songs, loudspeakers, operating music machines, instruments or musical devices, the use of which produces loud music or loud noises; or to make other noises by means of words or songs for advertising, interrupting the peace and quietude of the neighborhood, which is hereby deemed to be a nuisance and a violation of the laws and ordinances of the city.

(b)  It shall be unlawful for any person to use or operate any loudspeaker machine placed within the property line or within the private property of citizens or on any public street within the city for the purpose of operating same in a loud and boisterous manner which will interfere with the safety of driving and operating private and public vehicles upon the streets and highways of the city. (Code 1964, § 17-11)

While St. Augustine does sanction the use of decibel meters for measuring sound, note the levels, times and places specified in Article IV, Noise Control:

(a)  Continuous sound.
(1)  No person shall cause, suffer, allow, or permit the operation of any source of sound in such a manner as to create a sound level that exceeds the sound level limits listed in table 1 when measured at or within the receiving property line. Sound pressure levels in excess of those established in table 1 shall constitute prima facie evidence that such sound is in violation of this Code. 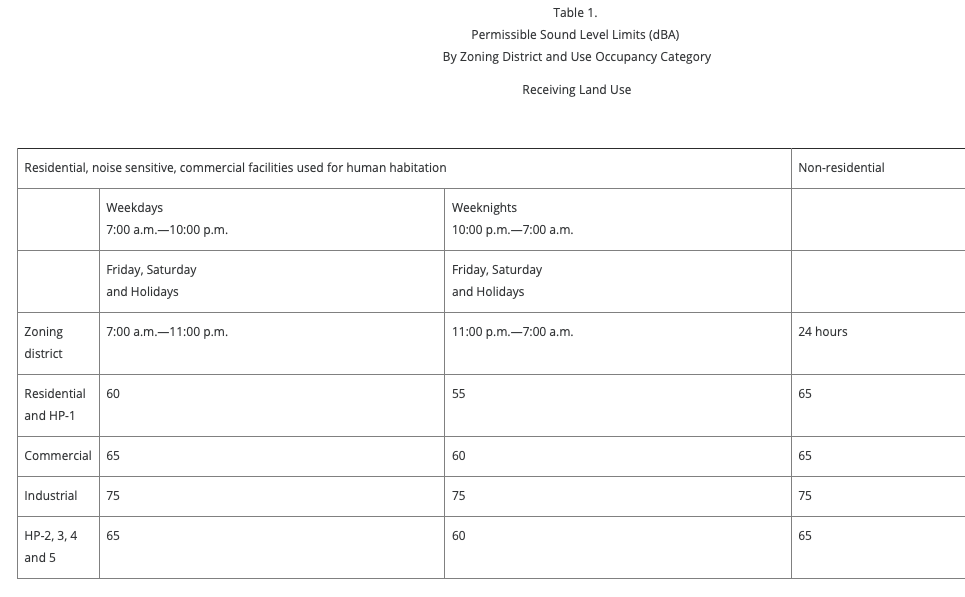 (2)  These limits may not be exceeded by any single incident representing the normal, usual operation of the sound source, during any three sampling intervals, the duration of which shall be no less than one-half minute, within any one-hour period.

(c)  Steady pure tones.
If the sound source under investigation is a mechanical device, and is in the investigating officer’s opinion emitting a sound with a steady tonal quality, the permissible sound level limits in table 1 shall be reduced by five (5) dBA. The sound emissions must be comprised of a single frequency or a narrow cluster of frequencies, which may be referred to as a whine, hum or buzz. The measured sound levels of such a source must not fluctuate by more than plus or minus three (3) dB. Such sound sources include, but are not limited to, heating, ventilating or air-conditioning units, refrigeration units and transformers.

(d)  Fixed amplified sound reproduction devices.
If the source of sound is an amplified sound reproduction device on private property, and the complainant states that the rhythmic bass component of the music is disturbing within their dwelling, then the noise enforcement officer may take sound level measurements within the dwelling of the complainant. No person shall cause, suffer, allow or permit the operation of any amplified source of sound in such a manner that it raises the total sound levels by the permissible sound level limits set forth in table 2 when measured within the residence of a complainant. These sound level measurements shall be conducted with the sound level meter set for “C” weighting, “fast” response. Such measurements shall not be taken in areas which receive only casual use, such as hallways, closets and bathrooms. For the purposes of these measurements, the ambient sound level is that sound level which is measured in the residence when the sound source under investigation is not prominent, or in a room on the same floor that is relatively unaffected by the sound source under investigation. The “C” scale is more sensitive to low frequency sound levels than the “A” scale; an increase of three (3) dB is perceived by humans as being plainly audible, an increase of five (5) dB is plainly louder, and an increase of ten (10) dB is perceived as being twice as loud. 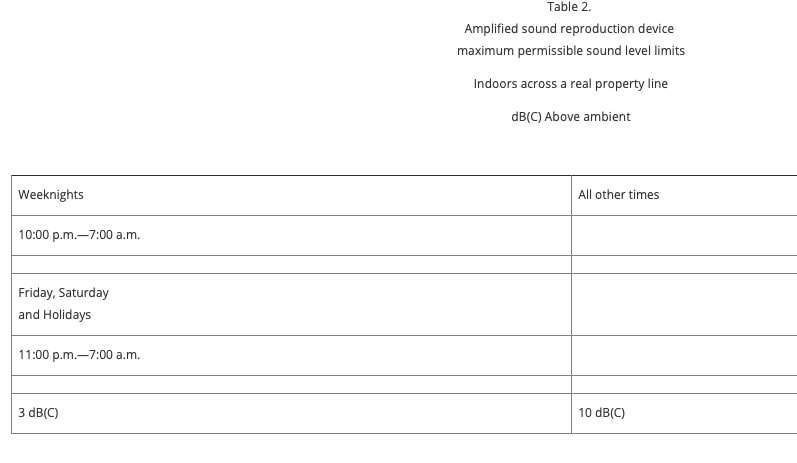 In looking at the decibel values mandated, it is important to remember that the sound of normal conversation is commonly accepted to be 55 decibels.

Residents and visitors often point to the quality of life in Fernandina Beach as its strongest attraction.  Contributing to that quality is its live music offerings, but also its quiet, sleepy Mayberry-By-the Sea Historic District neighborhood.  Can reasonable people de-escalate the current call for more draconian sound restriction legislation?  Stay tuned!