It’s a problem for animals that need the drug — and for people who likely don’t.

Florida’s supply of a horse and cow deworming drug is sold out, thanks to a disturbing rise in people using it as an alternative treatment for COVID-19, according to Agriculture Commissioner Nikki Fried. 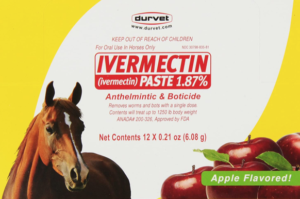 Ivermectin, an antiparasitic treatment for livestock, has not been approved for human use in most cases. Its manufacturer, Merck, says there is “no meaningful evidence for clinical activity or efficacy in patients with COVID-19.”

But despite warnings from the Food and Drug Administration and Centers for Disease Control and Prevention that taking the drug to combat the virus can hurt humans, many Floridians have instead turned to dubious expertise on social media to inform their medical decisions.

The result: There has been about one case a day this month of ivermectin-related poisoning, and patients the drug is intended for, animals, can’t get it.

“Our feedstocks are out,” Fried told reporters Monday. “This is a product that is supposed to be used for animals, and so of course when the feedstock is out — whether it’s for cows or for horses — and our industry can’t get them, that’s a problem.”

While largely meant for use in large farm animals, ivermectin has been approved for human consumption as an anti-parasitic in rare cases and at specific, doctor-set doses. Clinical trials of the drug “yielded insufficient evidence” so far that it is effective as a COVID-19 remedy.

But many still wary of getting FDA-approved vaccine shots continue to seek out alternate therapies. Ivermectin has gained traction online recently in part due to findings in an Antiviral Research pre-publication paper noting the “FDA-approved drug … inhibits the replication of (COVID-19)” in a test tube.

U.S. prescriptions for ivermectin have soared to more than 88,000 per week — a 24-fold increase from pre-pandemic numbers, the CDC said Aug. 26. And when they can’t get it through their physician, people are going to animal feed stores and getting highly concentrated formulations meant for 1,000-pound animals.

The Texas Poison Center Network reported a more than 150% uptick this month in the number of calls received about ivermectin exposures compared to the month prior.

Still, some officials argue it’s too early to jump to conclusions. U.S. Sen. Dr. Rand Paul of Kentucky — one of the most prominent and persistent proponents of the theory COVID-19 was manmade in a Wuhan, China, laboratory— argued residual disdain for President Joe Biden’s predecessor has tainted people’s openness to ivermectin’s potential as another tool to help end the pandemic.

“The hatred for (former President Donald Trump) deranged these people so much that they’re unwilling to objectively study it,” he told constituents Friday near Cincinnati. “I don’t know if it works, but I keep an open mind.”

Also last week, Judge Gregory Howard of Butler County, Ohio, ordered a hospital to administer ivermectin to a patient who had spent several weeks in an intensive care unit with the disease.

An advisor to Florida Gov. Ron DeSantis, Dr. Mark McDonald of Los Angeles, promoted the drug as an “effective, safe, inexpensive treatment” in an Aug. 5 Twitter post that appears to have since been deleted.

The safest course of action, Fried said, is for people to tune out what’s being said online and instead consult with trusted medical professionals.

“Talk to your doctors,” she said. “Do not self-medicate, and certainly do not medicate with a product that is for (an) animal that is much larger than humans.”