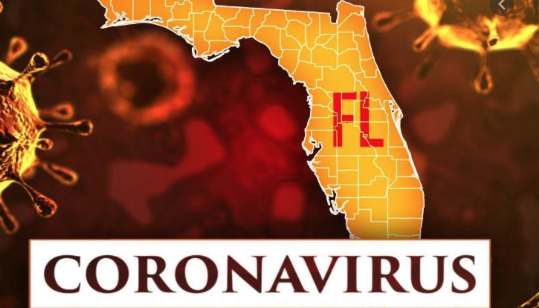 (The Center Square) – Florida Gov. Ron DeSantis said he didn’t know who Rebekah Jones was as controversy erupted Tuesday after Jones, the state geographic information system (GIS) manager, claimed she was fired for refusing to “manually change data to drum up support for the plan to reopen.”

By Wednesday, however, the governor had a damaging dossier on Jones and was prepared to use it in justifying her firing for insubordination, refuting her allegations about the Florida Department of Health (DOH) concealing “raw data” on its COVID-19 Data and Surveillance Dashboard and raising questions about her character.

When a reporter asked Vice President Mike Pence on Wednesday in Orlando to comment on Jones’ firing, DeSantis snapped, “He doesn’t know anything about this” and ripped into Jones and media outlets that seized on her allegations without scrutinizing them.

“What she was doing was putting data on the portal, which the scientists didn’t believe was valid data,” DeSantis said. “So she didn’t listen to the people who were her superiors. She had many people above her in the chain of command.”

DeSantis Communications Director Helen Aguirre Ferre on Tuesday night said Jones was fired for “repeated insubordination … including her unilateral decisions to modify the department’s COVID-19 dashboard without input or approval from the epidemiological team or her supervisors.”

According to the governor’s office, Jones rankled supervisors by posting her own analysis of COVID-19 trends on her GeoJones.org website without permission and was a “disruptive” presence.

“The blatant disrespect for the professionals working around the clock to provide the important information for the COVID-19 website was harmful to the team,” Ferre said. “Having someone disruptive cannot be tolerated during this public pandemic, which led the department to determine it was best to terminate her employment.”

According to DOH, Jones was asked to temporarily disable site users’ ability to export “raw data” from the dashboard until it could be verified.

According to emails reviewed by the Tampa Bay Times, DOH IT Director Craig Curry emailed Jones around 5 p.m. May 4 asking her to disable the “ability to export the data to files from the dashboard immediately” at the request of Division of Disease Control and Health Protection Director Dr. Carina Blackmore.

“We need to ensure that dates (date fields) in all objects match their counterpart on the PDF line list published,” Curry wrote.

As a result, an “Event Date” column, which lists every confirmed COVID-19 case in Florida without names, disappeared. By 8 p.m. May 5, the updated column again was available.

According to Jones, in a May 15 email issued to site subscribers, she had been relieved as dashboard manager for resisting the 27-hour embargo on the data. In ensuing emails to FLORIDA TODAY and CBS-12 in West Palm Beach, she claimed she’s been fired for refusing to “manually change data to drum up support for the plan to reopen.”

Noting frequent references to Jones as the dashboard “architect,” DeSantis said her job was to load data into modules.

She is “not even a data scientist, not involved in collating data, she lacks the expertise to do that,” he said. “She is not an epidemiologist. She is not the chief architect of our web portal, that’s another false statement.”

The dashboard was built on modules developed by ArcGIS.com, according to the GIS subscription service maintained by the Environmental Systems Research Institute.

DeSantis took it further Wednesday and got personal.

”Come to find out, she’s also under active criminal charges in the state of Florida. She’s being charged with cyber-stalking and cyber sexual harassment,” DeSantis said.

Leon County records indicated Jones was cited for misdemeanor cyber-stalking and cyber sexual harassment in October 2017. She pleaded not guilty. Those cases are closed.

In June 2019, a temporary injunction for stalking was filed against her, and she was charged with a misdemeanor count of cyber sexual harassment, according to a Tallahassee Police Department affidavit.

In that case, which remains open, a man claims Jones created a website that included naked pictures of him that she shared with his place of employment and family members.

“I have a zero-tolerance policy for sexual harassment,” DeSantis said. “She should have been dismissed long before that. I’ve asked the Department of Health to explain to me how someone could be charged with this and carry on.”

Jones can contest her dismissal, which is not “official” until week’s end, and has hired attorney Robert A. Morris to represent her. On Thursday, Morris issued a statement to CBS-12 News in West Palm Beach.

“It is unfortunate that Ms. Jones has been thrust into this spotlight. I am certain that appropriate investigation and inquiry from oversight committees and other investigative agencies will reveal what has happened and why it has happened,” Morris said. “Her prior personal history and challenges should not be mixed with the present circumstance. Ms. Jones is working hard to resolve personal and private legal issues that are completely unrelated to her awkward thrust into the national media through no choice of her own.”