What does the future hold in store for Yulee?

While Fernandina Beach is an incorporated city in Nassau County, FL, Yulee is considered a census county division (CCD). Census county divisions (CCDs) are county subdivisions that were delineated by the U.S. Census Bureau, in cooperation with state and local officials for purposes of presenting statistical data. CCDs have no legal functions and are not governmental units.

The boundaries of CCDs usually are delineated to follow visible features, and coincide with census tracts where applicable. (In rare instances, two CCDs may constitute a single census tract.) The name of each CCD is based on a place, county, or well-known local name that identifies its location. Florida is one of only 21 states in which CCDs have been established.

In the case of the Yulee CCD, included communities are Nassauville and O’Neil and many neighborhoods, including Heron Isles, Lofton Oaks, Meadowfield Bluffs, Pirate’s Wood, Timber Creek Plantation, Wilson Neck and Yulee Hills.

The map below shows the boundaries of the Yulee CCD as drawn by the Census Bureau. 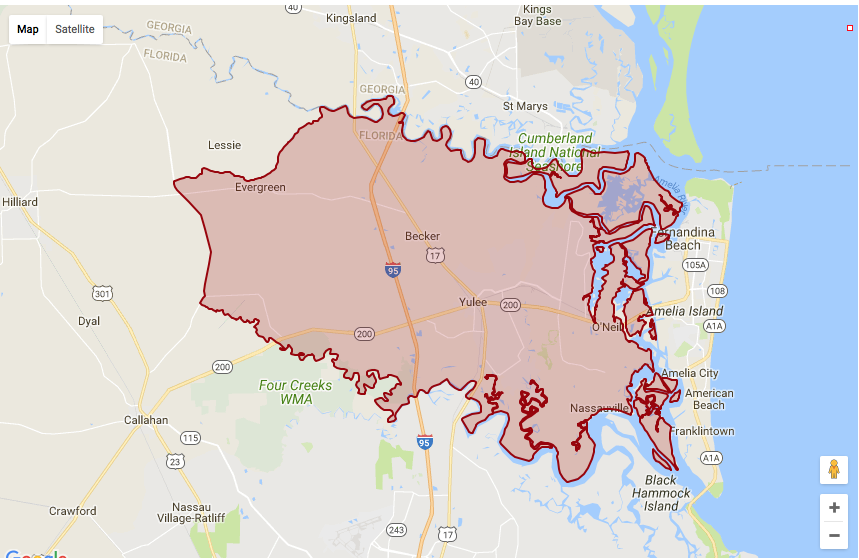 With new subdivisions on the drawing board in Yulee, this growth will move beyond potential to reality over the next few years, meaning that there will be a greater demand for schools, roads, recreation and infrastructure to support both the new residents and the businesses that will set up shop to serve them.

If Yulee were an incorporated entity, its population today would place it just above the Florida cities of Winter Park and Deland and a bit below the cities of Dania Beach and Clermont.  Will there come a tipping point for the people who live in Yulee that will produce a movement to incorporate Yulee into a city that can better meet the demands of its residents for new and growing services?  Will such a movement divide the community into camps representing those who prefer the rural, laid back nature of earlier times and those who demand more government services?

What would the implications be for the unincorporated southern half of Amelia Island, now sandwiched in between two cities and isolated from the rest of unincorporated Nassau County?  How would taxes change for western areas of the county? Would the County Seat, currently in Fernandina Beach, then move to Yulee?

While the need to answer any of these questions is not pressing today, over the next few years they may be factors to be studied.  There are those who believe that for reasons of political expediency Nassau County has gotten behind the proverbial eight ball in planning for future growth.  So far, it does not appear that population growth pays for itself.  Revenues have not kept up with the needs of current population growth, much less for a population explosion that could occur over the next 5-10 years.

Will the Board of Nassau County Commissioners face the necessity of raising taxes to handle unmet needs?  Will the population of Yulee, the area where most of that growth will undoubtedly occur, suffer in silence as county services play catch up?  Or will they take matters into their own hands and form a separate government?

A recent example of such a move occurred in Flagler County, a rural county with large timber resources between St. Augustine and Daytona Beach.  In the late 1960’s ITT/Levitt developers had a vision to create a 22,000-acre community out of what some had called a pine covered swamp.  Roughly 30 years later, 65 percent of the 12,000 residents of that community voted to incorporate into what is today the City of Palm Coast.

On January 1, 2000 the new city’s population was estimated at 29,360. According to a brief history of Palm Coast included on the city’s website,  “[Palm Coast] Mayor Jim Canfield, the City Council, and the city manager initially focused on planning for issues facing a new city. Providing residents with essential government services and promoting the community’s economic growth were two major goals. As a result of joint meetings of Palm Coast City Council and Flagler County Commission, the county turned over many parcels of land to the city benefitting fire, public works, recreation and parks, and the locating of new schools. At the same time, the city began studying acquisition of its water sources.

Is the Yulee CCD poised to go in the same direction as Palm Coast?  That is a question best left to the people who will be living in Yulee over the next few years.

Thank you Suanne for a well researched and informative article on our future. We often hear about South Florida and all the development & overbuilding along the Atlantic & Gulf Counties and areas in between. Then along came the Mouse: Disney/SeaWorld/Universal and the cattle ranches & citrus groves & strawberry fields suddenly started disappearing. But we always said “It will never happen in our quiet rural North Florida.”

Well look around today…it is happening here & now. The clearing of trees, the closing of open spaces, the filling of wetlands and the widening of highways.
Ain’t progress wonderful.
And the past harsh Winter will bring an extra exodus of Snowbirds…

Do enjoy your writing Suanne.

The fact is that Nassau County is now owned by a large company that seeks to develop its swamp park into a residential community and will re-brand Yulee into the history books much like other former niches to take on the new name of Wildlight. The political investments made to seek control of legislative seats, county commission seats and school board seats dominates the political landscape and the use of “dark money” and political committees to help shape the future is all part of helping sell a vision of Florida Low Country. The reality is that Senator Bean and Rep Byrd created through HB 1075 the largest government in Northeast Florida, it is now the powerful political entity in the county as we saw this past session when they sought to have county taxpayers cover what the county described as millions in costs for the parks they wanted inside the development. The career politicians like Senator Bean like to appear in the commercials promoting Wildlight on behalf of the land owner, they are allowed to use a public school as if it were a private amenity to help sell and attract home buyers and they feature public officials in the sales pitch to draw in new home buyers. They all appear to be involved in the race to change Nassau County. Make no mistake Wildlight is too big to fail, it will float $100 million in infrastructure bonds, it will bring in massive amounts of back fill to help raise the elevation so construction can proceed, this will impact the direction of the water, guess where water will flow? You guessed it, straight to Callahan. The impacts of all of this are significant and most have not through the long term consequences, the prospects of political cash from wealthy donors at large companies is hard to resist, but I thnk this past session elected folks learned another valuable lesson “all that glitters is not gold”. Its time for new leadership and fresh ideas to stand up against the special interests. Its ironic that our legislators who got s into this mess now want a “pat on the back” for stopping the encroachment by the same company that pushed for the special district to start with. If Senator Bean and Rep Byrd listened to the people back home and the call for changes to the local bill they would have included amendments to address the concerns, instead they deferred every amendment to the land holder because as Rep Byrd told me “it was their bill”. No Mr. Byrd the truth is this bill carries your name and Senator Bean’s name on it, you own its framework and its impact on Nassau County 100%, it is not owned by anyone else other than the legislators who authored the legislation and passed it. The County Commissioners do deserve a round of applause for standing up against this raid on the taxpayer and protecting taxpayers, I must give them credit for real political courage.