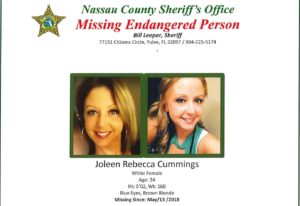 Sheriff Bill Leeper will hold a news conference tomorrow at 2:00 p.m. to provide information on the investigation of the disappearance of Joleen Cummings. Cummings of Hilliard, Florida, was last seen on Saturday, May 12, after leaving her place of work.

As previously reported, prior to Cummings disappearance on May 9, 2018, “Nassau County deputies responded to a domestic disturbance at Joleen’s Hillard residence. According to the deputy’s case report, an ex-boyfriend, Jason Gee, “had gotten into a verbal altercation when she would not let Jason stay at her residence because he has an active warrant out for his arrest.” Jason fled the scene on foot and law enforcement was unable to locate him. Joleen told officers she suffered no physical harm.”

Information gained from the news conference will be reported in the Fernandina Observer.