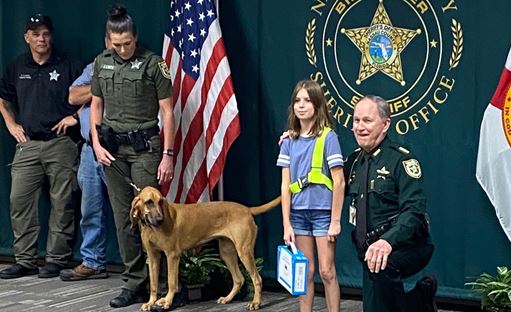 Deputy Eric Oliver was killed in the line of duty on November 22, 2016. His daughter, Shelby, was only 6 at the time. Shelby is now in 5th grade and participates in her school’s safety patrol. Safety Patrol is currently selling candy bars for their annual trip to Washington, D.C. Shelby is especially excited about going to Washington, D.C. because her Dad’s name is on the Police Memorial Wall and she will get to see it in person!

On Friday, September 17th, Shelby made arrangements to visit the Sheriff’s Office to sell candy bars to the department. What Shelby didn’t know was that the Sheriff’s Office had already begun collecting money in hopes to raise enough to pay for both hers and her mom’s ticket. Upon arriving, Shelby was surprised to learn that not only had the $1,600 been raised for their tickets, an additional $3,600 had been donated by Sheriff and Fire/Rescue personnel. The additional funds have been donated to the Safety Patrol to assist with tickets for the remaining 29 students. Board of County Commissioner employees donated an additional $250 on Tuesday, September 21st, which will also be given to the Safety Patrol.

Thank you to the Sheriff’s Office for coordinating this fundraiser for Shelby. And a big thank you to all the County personnel who donated money for this wonderful cause.