During a Special Meeting on May 16, 2018, the Nassau County Board of County Commissioners (BOCC) listened to county Management and Budget Officer Justin Stankiewicz reel off a series of options for them to consider in making decisions to allocate funds in the next budget year:

Or, in lieu of any/all of the above …

Stankiewicz stressed that numbers he presented were tentative, based on projections from the current budget year.  But he and County Manager Shanea Jones need guidance from the BOCC on ways to avoid what could be more than an $11M shortfall.

The county’s financial situation will be worsened, should the voters approve a Constitutional Amendment this fall that would provide an additional homestead exemption.  The county has yet to receive reimbursement from FEMA for earlier hurricane related expenses.

Commissioners listened quietly as Stankiewicz laid out the county’s situation with respect to revenue shortfalls over the recent past, which were funded from contingency reserves in lieu of tax hikes.

Stankiewicz presented a series of slides to indicate what benefits increases in millage or other fees could provide to county residents. 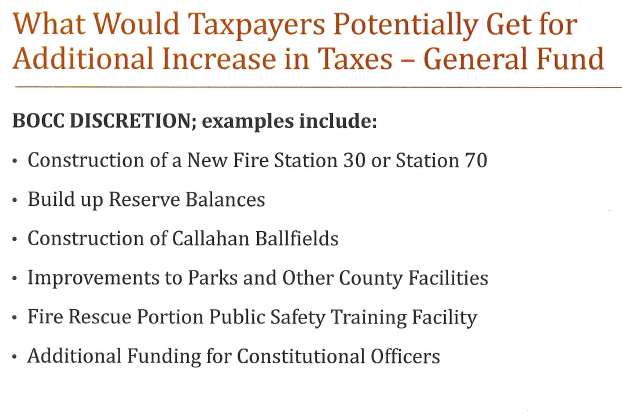 Commissioner Danny Leeper (District 1) said that previous commissions thought avoiding tax increases was the right course of action because county residents were suffering from the economic downturn.  He said, “Hindsight is 20/20.  I don’t think we can maintain the status quo.  It will require choices of this board to determine what is in best interest going forward.”  He stressed the need for unity among the commissioners on a message to take to the people, once the decisions are made.

Commissioner Steve Kelley (District 2) said that he would consider a long-term debt in terms of a bond if the county would agree to cut spending.  He asked Stankiewicz if a feasible options might be asking each department to take a 5 percent budget cut or to plan on no increases next year. Stankiewicz said that such options were up to the BOCC, but that they would affect the level of service the county provides.

Commissioner Justin Taylor (District 5) said that he would like to explore the long-term debt option, as well as raising the gas tax.  Leeper indicated his support for a road bond and a multi-year budget that would account for cyclical variations.

Chair Pat Edwards (District 3) said it concerns him when the county professionals tell the BOCC they have a problem, yet the BOCC fails to act.  Now the county is in an even graver position with significantly depleted reserves going into hurricane season, and the very real possibility of future revenue loss due to the homestead exemption amendment before the voters this fall. “Do you want the status quo?” he asked, “Or do you want to do some of these [road and infrastructure] projects that we have been talking about?”

Stankiewicz reminded commissioners that the figures he had presented were best guesses at this point that would be updated when final figures were received from the state and the Property Appraiser.  He said that the county staff needed to know funding levels and priorities from the BOCC. He agreed that a multi-year budget could be prepared.

County Clerk/Comptroller John Crawford also attended the meeting.  He told the BOCC that they had hard decisions to make without placing an undue burden on county taxpayers.  He indicated that there was a need to build up county reserves.  “Let’s put some hay in the barn,” he said.