The theme of yesterday’s Nassau County Board of County Commissioners meeting could have been taken from an old Danish Proverb: bad is never good until worse happens. After years of what Commissioner Steve Kelley (District 2) characterized as “kicking the can down the road” on tax and fee increases essential to supporting population growth and basic services, commissioners appeared to have come to the sobering realization that Nassau County needs to find ways of bringing in more revenue.

The discussion arose in the wake of County Fire Chief Brady Rigdon’s monthly status report on Fire/Rescue activities. He reported that last year his department responded to more than 10,000 calls, an increase of a thousand over the previous year. Medical calls continue to outstrip fire calls. Last month roughly 90 percent of calls were for medical help. In order to meet the needs of a growing population, an eighth fire station will soon open.

When queried on his priorities for the next budget year, Rigdon said that he would be seeking additional staffing and renewing a request for additional heart monitors. In discussion with County Manager Shanea Jones, it was established that each fire station needs six responders for each of three shifts, resulting in an annual operating cost of $2.5M per station per year. Rigdon said that while engines should be staffed by three personnel when responding to fires, current staff limitations have that number at two.

The number and location of fire stations is dictated by population location and requirements established by the Insurance Service Organization (ISO). This is the organization tasked with determining the rating class for a department, and this in turn is used to determine the insurance premiums charged by insurance companies. 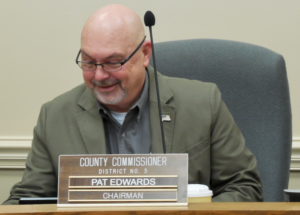 Further discussion identified needs for additional fire/rescue resources in terms of personnel and facilities. Commission Chairman Pat Edwards (District 3) told fellow commissioners that the county needs to look at developing a five-year plan, review impact fees, ad valorem taxes and sales tax. “Somehow we need to bring [a discussion of] funding to the table,” he said. Commissioner Danny Leeper (District 1) agreed, adding that county staff has been asked to do more with less over recent years. While staff devotes time to finding ways to save money and streamline operations, it appears that the county may have hit a wall.

After listening to staff report that the county has only received $52,000 of the $4,913,000 requested from FEMA to deal with Hurricane Matthew damage, Edwards said, “We can’t afford a severe thunderstorm with the money we currently have at hand.” OMB Director/Assistant County Manager Justin Stankiewicz told commissioners that it could take 3-4 years for FEMA reimbursements to come through and that the paperwork for Hurricane Irma damage has not even been filed yet. In response to questions Stankiewicz said that the FEMA funding, which could pay up to 75 percent of approved storm claims, is not closed out until post-funding audits are completed, sometimes 10-12 years after the storm event. 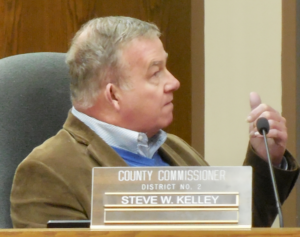 Commissioners expressed concern over the county’s provision of public safety in light of current finances. Commissioner Steve Kelley suggested that perhaps the time has come to institute fire assessment fees. Other commissioners agreed, adding that there needs to be serious discussion over current impact fees, mobility fees and recreation impact fees. Chairman Edwards charged County Manager Shanea Jones to bring documentation on all these matters to the BOCC for their review and consideration “as soon as possible.”

County Attorney Mike Mullin cautioned commissioners that outside consultants will be needed to establish a sound, rational basis for changing impact fees. He said that such study requires county funding and “needs to be considered now.” Commissioner Kelly said, “We have done all we can to hold the line [on tax and fee increases]. But we need to begin considering next year’s budget sooner this year.”

County Manager Shanea Jones reminded commissioners that study of a fire assessment fee could only consider services that benefit a property, not the people who live on it. Therefore, such a fee cannot cover emergency rescue services. Earlier in the meeting, Fire Chief Rigdon had presented statistics showing the growth in calls for medical services over fire service. Although January 2018 is only half over, 332 of the total calls for service his department has received are for medical assistance, with only 85 related to fire assistance.

Chairman Edwards said that the county is growing at a “phenomenal rate,” adding that Nassau County staff “is the best in the business” but they have gone as far as they can with the limitations of current county finances.

Commissioners were clear in expressing their desire to review possible avenues for raising revenue. However, there was no indication that they will support any particular course of action. In past years the BOCC has seemed poised to raise taxes or fees, but stepped back from the brink seemingly in light of public opposition during election cycles. The Fernandina Observer has covered the county’s financial situation over the past few years.  Below are some links to previous articles: 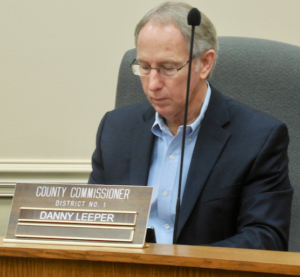 Commissioner Leeper advised commissioners that Phil Scanlan has requested time to present a request for funding assistance for Amelia Island multi-use trails and bike paths. It was the consensus of the BOCC that the county is not in the position to fund such a project at this time.

Commissioner Justin Taylor (District 5) did not attend the meeting.

Thanks to Chief Rigdon for his corrections.