The Fernandina Beach City Commission (FBCC) and the Nassau County School Board (NCSB) met in joint session on March 31, 2021 for what must have been one of the least contentious and even most enjoyable meetings for both boards, if for no other reason than the meeting lasted barely a half hour.  New faces on both boards participated in low key discussions, mostly on topics generated by the City.  School Superintendent Kathy Burns provided an update on School District activities and achievements over the past year as well as future goals.

The City and the School Board indicated their support for continued joint efforts to develop programming for the City’s PEG Channel.  City Vice Mayor Len Kreger updated the School Board on outreach efforts to attract organizations to take advantage of the channel, reminding them that closed captioning at cost must be provided for any programming with speakers or actors.

School Board Chair Donna Martin said that she looked forward to getting word out to the public on the PEG Channel opportunities for educational purposes.

No more talk of a dog park

The City also indicated that it no longer had interest in siting a dog park on property owned by the School District near the Administration Building on Atlantic Avenue.

State of the Schools Report

Superintendent Burns delivered the “State of the Schools Report,” noting that despite the significant Covid-related challenges posed to the schools, parents and children during the past year, the School District had completed its accreditation process and continued focus on its mission:

To develop each student as an inspired life-long learner and problem-solver with the strength of character to serve as a productive member of society.

She reported that the District graduation rate is 91.6 percent and that via Dual Enrollment, 644 students are taking 429 college level classes.  Students have also earned 1,346 CTE certifications.  She cited the District’s involvement with the community through a variety of avenues, including social media, Teacher Depot, Take Stock in Children, the Boys and Girls Club and the YMCA.

Burns spoke to goals and activities to recruit and retain highly qualified teachers and support personnel.  A recruitment fair is scheduled at Wildlight for April 10.  In cooperation with FSCJ-Nassau, the School District is promoting coursework for parents of school age children that would lead to a degree, and possibly a job with the School District.

Growth management is a particular focus for the School District, as new communities are built throughout Nassau County.  A Land Growth Committee, composed of School District representatives and others throughout the County, meets regularly to study where growth is taking place in order to plan for future schools.  Fernandina Beach Planning Director Kelly Gibson and City Attorney Tammi Bach represent the City on that committee.

City Commissioner David Sturges asked about population impact on the future distribution of state money to the local school district.  Burns said that she couldn’t speak to that particular question, but she did allow that while in the past, new schools have always been built with money on hand, that might need to change because of the rapid population growth.  She said that the School District might need to consider bonding money for new schools.

“We’ve saved money every year in the past until we had enough money to build a new school.  I don’t think we have enough years to save for the rapid growth we are experiencing,”  Burns said.

Nassau County Schools rated A by Department of Education

The State Department of Education has rated Nassau County Schools as A for each year from 2017-2019.  The County Schools were rated 4th state wide in 2019, with no grades given last year due to Covid.  Burns indicated that the School District continues its pursuit of excellence and hopes to climb even further in ratings this year.

Commissioner Bradley Bean congratulated Burns on ranking in the top 4 school districts state wide.  He said, “As a former Pirate myself, I will put our county schools ahead of the other 3 districts on the list.”  Noting that St. Johns County ranks at the top, he declared that St. Johns has nothing over Nassau County, from his perspective.  Bean continues his involvement with the schools by coaching Fernandina Beach High School’s Robotics Team. 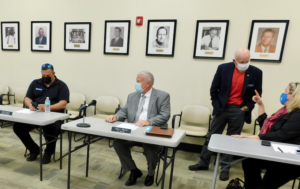 Vice Mayor Len Kreger said with a smile, “I would think that maybe since the state didn’t grade school districts last year, we may already be number one!”  This generated a lot of chuckles from the group.  Superintendent Burns turned to media representatives laughingly and said, “Make sure you report that!”

Gathering on the Green

Superintendent Burns remarked that just before Covid last year the School District had staged iits first event to benefit the arts in Nassau County Schools:  Gathering on the Green.  This event, held on the School District property at Atlantic Avenue, featured a concert, food trucks and games.  It was well attended, and she expressed hope that a second such event would take place by summer.  She issued an invitation to partner with the City.  Vice Mayor Len Kreger volunteered to serve on a committee to help determine a role for the City.

One item of business left over from earlier meetings was resurrected by Fernandina Beach City Commissioner Bradley Bean.  Bean asked whether the School Board would consider removing the fence along the Atlantic Avenue sidewalk of its property.  He maintained that by removing the fence, park users would more easily be able to move between School Board property and the City’s Central Park, especially during special events.

Bean continued to advocate for removing the fence, saying that it was both a metaphorical and physical barrier to the two elected bodies working together.  Removing the fence would increase open park space by a third, he claimed, adding that the City would put in a crosswalk to ensure safety, similar to that located at Atlantic and Citrona.

School Board Member Gail Cook reminded the FBCC that in response to City complaints the old fence had been removed and a new one installed.  She indicated that for safety reasons and concerns about potential vandalism to school buildings the School Board would like to see the fence retained.

Superintendent Burns said, “The fence is not a barrier; people use the space every day, including our parking lot.  We don’t mind.”

School Board members did not rule out allowing outside usage of their property, but wanted assurances that any such use would follow accepted School Board protocols.

School Board members and City Commissioners all spoke in positive terms about open dialog and working together in areas of mutual concern and support.

In closing the meeting School Board Chair Donna Martin reminded people that throughout the Covid pandemic, “Zero cases of covid were traced to our schools.”

Both Martin and Superintendent Burns praised the efforts of teachers and school personnel for keeping the schools operating safely during such challenging times.

Dr. Burns concluded, “In true educator fashion, everyone has risen to the occasion.”