Editor’s Note:  For the 9th straight year, the Fernandina Observer is offering candidates the opportunity to answer questions posed by our senior staff.  The goal is to inform and educate the voters of Nassau County.  We have disabled comments on this post.

To read initial candidates’ announcements click on the names below.

What would your approach be to ending the long running dispute between Nassau County and Raydient?

Have Rayonier representatives meet with County Commission to discuss their issues. They have failed to meet twice when they agreed to do so. Rayonier stopped communicating with County Commission regarding their issues and refused to attend two public Commission meetings that were held specifically to address the public-private partnership and funding concerns. They agreed to meet on February 12, 2018 at 4:00pm and no representatives from either Rayonier or Raydient or the ENCPA attended the meeting. A second meeting was set for February 16, 2018, following notice that Rayonier was supporting an amendment to Senate Bill 324 that would effectively remove its obligation to fund recreation space within the ENCPA. Again, no representatives from Rayonier or Raydient or the ENCPA attended the meeting. Please visit the link https://fl-nassaucounty2.civicplus.com/887/BOCC-Statement-on-RaydientENCPA from Nassau County Official Website nassaucountyfl.com to learn the facts and important links on the dispute.

What would your approach be to ending the long running dispute between Nassau County and Raydient?

It really is out of our hands right now.  Raydient has already won a Summary Judgement from Judge Daniels regarding the count of the lawsuit pertaining to parks and recreational facilities and who is responsible for funding them.  If you read the 20-page Summary Judgement, it boils down to the legal definition of the words “Shall” and “May”.  You don’t have to be a lawyer to understand this and County Attorney / County Manager Mike Mullin certainly should have known what this language in the legislation meant. Also, it is the duty of each County Commissioner to read and understand what they are voting for.  It is my understanding that Mr. Mullin is now advising the BOCC to double down on this ruling and appeal it.  The legal costs so far are staggering.  An appeal, in my opinion, is throwing away good money after bad.  Unfortunately for Nassau County, I believe that we will lose most, if not all, of the remaining counts of the lawsuit.  Specifically, the counts pertaining to Mr. Mullin’s fiduciary duty to Raydient as their attorney while employed by Rogers, Towers law firm from 2007 to 2015 before he came back as County Attorney in 2015 for the specific purpose of using his extensive knowledge of Nassau County Government and crafting the same legislation he now wants the County to fight and appeal.  Another count of the lawsuit pertains to violation of the Government in the Sunshine Act by certain County Commissioners.  Raydient contends that some Commissioners and County Staff would routinely meet at a Commissioner’s house and elsewhere for cocktails and discuss County business.  Text messages between Commissioners regarding County business are also being questioned.

After Judge Daniels rules on the remaining counts of this lawsuit, which by the way is being held up due to Mr. Mullin and Commissioner Leeper’s reluctance to be deposed until after the Primary Election, the BOCC must find a way to move forward and put this dark chapter behind us.  Regarding the long-delayed depositions, my guess is Commissioner Leeper does not want to be asked any questions about his residency under oath.

With the population growth in the county and growth in island tourism, how would you propose solving beach congestion problems such as traffic, and parking?

There have been many studies over the years to address traffic and parking along the beach and downtown Fernandina. I would suggest we review those studies and implement recommendations we can agree to work on together between the City and the County with public comment. We are fortunate to have good beach access and parking facilities, but traffic and parking is still challenging. Are there any parking lots that could be used for residents only? Let’s review our parking lots to see if any more parking spaces can be added by redesigning the space. The County owns an oceanfront vacant lot inside the City, and we need to determine the best use with the City on its use for public access. Let’s work with private property owners on using their vacant lots or commercial parking lots near congested areas not being used after hours or on the weekends that could benefit private owners for its use. Let’s look at ways to expand the trolley system and public transit to move people from park and ride lots during peak periods. Public Transit opportunities with schedules that offer convenience to residents and visitors would improve movement of people with less traffic.

With the population growth in the county and growth in island tourism, how would you propose solving beach congestion problems such as traffic, and parking?

This is one of the questions I have been frequently asked.  I am not a fan of over regulation of any kind.  It seems to me that beach parking and driving restrictions are a result of an occasional, though tragic, incident.  These events are not the norm.  Therefore, I would advocate for beach parking and driving in areas where it has been traditionally allowed.  It is especially important to people with disabilities to be able to access the beach.  I believe this would help to reduce the beach congestion problem.

Even though a significant portion of Nassau County property tax revenue comes from Amelia Island, some residents feel the county is neglecting needs in the unincorporated area of the island, including conservation efforts, to fund projects on the mainland. How do you respond to these concerns?

First, I would want to know what specific needs are being neglected to assist with solving them. The county and city were preparing a Conservation Referendum to help with conservation efforts to be voted on by our citizens this year but due to COVID 19 both were removed and will be considered later. The County worked closely with local environmental groups and approved the Amelia Island Tree Protection Plan intended to preserve and enhance the maritime forest in the unincorporated areas of Amelia Island. The County has and will continue to work with residents in the unincorporated areas of Amelia Island and will act on their concerns as appropriate. We have constructed and added miles of hiking and biking trails along First Coast Highway, and most recently the River to Sea Trail along Simmons Road with State and Federal assistance. The County is working with the American Beach Community on improving their neighborhood with water and sewer needs and other transportation improvements in the unincorporated areas of Amelia Island are being planned.

Even though a significant portion of Nassau County property tax revenue comes from Amelia Island, some island residents feel the county is neglecting needs in the unincorporated area of the island, including conservation efforts, to fund projects on the mainland. How do you respond to these concerns?

This is a difficult problem to solve because it pits Eastside against Westside taxpayers.  How do you justify a property tax increase to a taxpayer in Callahan or Hilliard to purchase property on Amelia Island for conservation when the Westside taxpayer is fighting to get the County to provide services such as lighting to ballparks and soccer fields on the Westside for their children’s sporting events?  Also, who decides what property to purchase for conservation?  I agree that Island residents pay the lion’s share of residential property taxes.  However, the growth is coming to Yulee and west of I-95.  Some type of balance needs to be made regarding conservation efforts and infrastructure needs.  Property Rights must also be considered to avoid costly lawsuits.  As I have said in other questionnaires and on social media, government cannot be all things to all people.  I can only promise that I will listen to all sides of this issue and after due diligence and research vote for what is best for the taxpayer.

Why would you support or oppose a charter form of government, also called Home Rule, for Nassau County?

This issue has been discussed in the past by County Officials. Suanne Thamm with the Fernandina Observer has written an excellent series of articles on charter versus non-charter types of governments and I encourage others to read them. I would support a study on the issue and investigate what the advantages and disadvantages would be. To date, there are 20 charter government counties in Florida out of 67 counties.

Why would you support or oppose a charter form of government, also called Home Rule, for Nassau County?

I’m not deflecting; however, this is the first time I have been asked this question.  Therefore, I can only assume that this is not an issue that is on the average voter’s radar.  Maybe it should be.  My research on this indicates that Florida has 20 Charter Counties which collectively are home to 75% of Florida residents.  Most of these are large and / or growing counties.  Of these 20 counties, none of them have reversed their decision to become a Charter County. 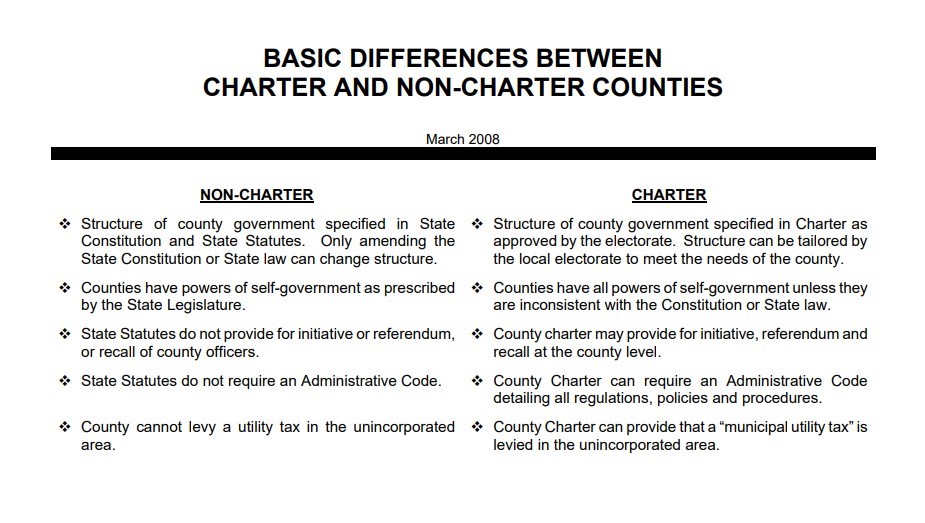 I believe that this would need to be a citizen driven change requiring intensive research and public hearings over the course of several years. I am not opining either way, however, right now with COVID19 recovery efforts and the issues I have discussed above, this would not be my primary focus if elected.

The position for Nassau County Commissioner, District 1 will be determined  during  the August 18 election when all registered voters can vote.